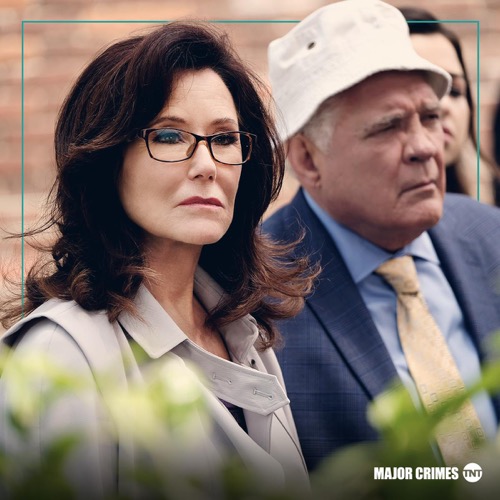 TNT Major Crimes airs tonight with an all-new Monday, December 6, 2017, episode and we have your Major Crimes recap below!  On tonight’s Major Crimes season 6 episode 6 episode as per the TNT synopsis, “Conspiracy Theory: Part 1” as per the TNT synopsis, “The murder of a well-known attorney points to bevy of high-profile suspects, including her son, her ex-husband, a film director whose career she helped destroy and a former football player whose sports bars-restaurant chain features scantily clad women. Meanwhile, Rusty and Gus confront issues in their relationship.”

The show opens with the team meeting at the scene of a murder. A woman has been found dead in her Mercedes with a gunshot wound to the head. After an examination of the victim, it is determined that she was shot by two different guns. The team heads to the victim, Bonnie’s office to notify her son of her death. He is an associate in her law firm. When they arrive several members of the press are there. It seems Bonnie had a press conference scheduled to address three women’s complaints of wrongful termination. Bonnie and her son were representing the women in their suit.

Julio tells Bonnie son she was killed last night and is shocked by his response. He shows no emotion and instead holds the news conference. He seems much more interested in his mother’s assets then caring that she is dead. Gus shows up at Rusty’s apartment and drops off Rusty’s things. They argue and he leaves. The team interviews the women who were using a local restaurant chain for discrimination. They all were forced to sign contracts that said they would be terminated from their jobs the day they turned 30. It also had specific requirements about their looks.

The team learns Bonnie had taken out restraining orders against several people who she had sued in the past. She was a volatile lawyer and had made many enemies. They begin by interviewing a director who was forced to pay $2 million dollars due to his sexual harassment of an actress. He is very angry and is his name is placed at the top of the list of suspects. The forensic expert discovers that Bonnie was shot by the same gun but two different types of bullets were used. There was most likely only one killer.

Rusty tells Sharon that Gus came by and they argued. The team continues to review suspects and adds Bonnie’s son to the list. Two of the other possible suspects had alibis and are taken off the list. The team puts Sam (Bonnie’s son) through the ringer during questioning. He says he thinks Craig Curtis is the person they should be talking to. Craig was going to lose everything due to Bonnie’s suit against him for his treatment of the women from his restaurant. Sam says he had been talking to Craig and was willing to settle the case while his mother wanted a long drawn out trial that would have cost Craig millions. Craig had every reason to kill Bonnie.

The team asks Sam to help decipher Bonnie’s call log to prove he is innocent. Craig is very complimentary of Bonnie during his interview. He says Bonnie was doing him a favor by providing free publicity for the restaurant. Every time she put the fired women on television people thought, “Wow if these are the women who were fired, what do the current waitress; look like?” Sam tells the team that there are a couple of calls on Bonnie’s telephone they can’t figure out. Craig tells the team they should be interviewing Bonnie’s ex-husband. He hated Bonnie and told anyone who would listen what a bad woman she was.

Rusty goes to see Gus and tells him what his boss, Aiden did to his was wrong and he should sue him. Gus isn’t willing to do that but then Rusty asks if Gus was in love with Aiden. Gus leaves without answering. The team goes to the opening of Craig’s newest restaurant to interview Bonnie’s ex-husband and one of Craig’s investors who had a lot to lose if Bonnie successfully sued the restaurant. Bonnie’s ex-husband claims to be very distraught over her death. He says he and Bonnie still had a very active sex life and he thinks the crazy director is the one who killed her. Less than two weeks ago he showed up her house again and he had to kick him off the property.

The team is able to figure out who the mystery number was on Bonnie’s telephone. It was a waitress from Craig’s restaurant. Rusty confronts Aiden and tells him if he doesn’t sign the letter of recommendation he brought and write a check to Gus he will make sure he issued. Aiden does what he is told. The team goes to the woman who had been calling Bonnie to question her. They find her dead.