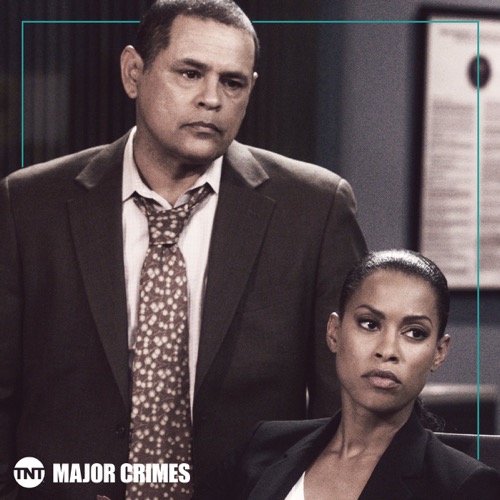 Tonight the TNT series Major Crimes airs with a Wednesday, March 1, 2017, season 5 episode 15 and we have your Major Crimes recap below. On tonight’s episode called, “Cleared History” as per the TV  synopsis, “The death of a young man found in his living room with his throat cut is investigated. Emerging suspects include his roommate.”

The team is called to an apartment where 25-year-old Gavin is dead. He died from having his throat slit. There is no sign of forced entry but several of Gavin’s computers are missing. The team interviews Jack, Gavin’s roommate. He says he was out all night painting his new apartment and when he returned in the morning he found Gavin dead. The team finds all of Gavin’s computers and the murder weapon in the tub submerged in water. Everything is ruined. Jack’s clothes are checked but there are no signs of blood. The team finds Jack’s cell phone and read anger texts between Gavin and Jack. Jack even threatened Gavin’s life in one of the texts.

Andy complains of his new diet since his heart attack. Rusty returns home and is upset about Gus. He told Gus he didn’t think it was a good idea to move into together and Gus broke up with him. Sharon gets a call that Gavin’s computer contained over $200,000 in cash and hidden set of keys. The team realizes that Gavin worked for a security company and used this information to break into people’s homes to rob them. The team interviews the executives from the company and they report they ended the relationship with Gavin due to improprieties. The team thinks Gavin was stealing computers and using what he found for blackmail.

The company gives the team a list of all customers Gavin worked for and the team ID’s 13 people who may have a beef with Gavin. All 13 people had their laptops stolen. Several report they were blackmailed by Gavin. None seem like suspects. Mike is able to unlock Gavin’s computer and finds 100’s of images of child pornography. They call in the FBI to help with the investigation. They need to figure out if the images where Gavin’s or someone he was blackmailing.