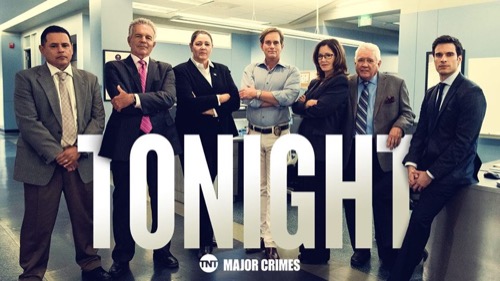 TNT Major Crimes airs tonight with an all-new Monday, February 22, 2017, episode and we have your Major Crimes recap below!  On tonight’s Major Crimes season 5 episode 14 winter premiere episode as per the TNT synopsis, “The murder of a young woman found in a river is investigated, but the division’s case is impeded by a secretive PI working for a tech-industry millionaire and also by a deputy chief (Camryn Manheim) who regards Sharon Raydor as a rival.”

The show begins with shots fired and people screaming and running out of an office building. Police in bulletproof vests enter the building and search for the shooter. The lieutenant enters an office and is shot in the head. The rest of the team enters and kills the shooter. It turns out it was only a training exercise. As the lieutenant is getting a butt chewing a call comes in about a murder and the team leaves.

A woman is found dead by a river and most likely died a day ago. She was most likely strangled. The lieutenant notes she was dressed as if she was going on a date. There are no signs of a sexual assault. The coroner recalls he took a call from a PI looking for a woman who was wearing clothes similar to their victim. It leads to the victim name, Allie King. They team meets with the PI but he won’t tell them anything. They decide to go to her home to search for evidence and don’t release her death to the media or family while they investigate.

Sharon’s son comes to the station and share a text he received from Gus. She encourages him to call Gus. Andy takes his blood pressure trying to show he doesn’t need to be on light duty any longer. Buzz gives Rusty a copy of the video of the crime scene and it obvious that Buzz is upset but he denies any problems. The team gets into Allie’s Facebook page and see who they think is her boyfriend. He is a rich techie. As they speak he appears with the PI the team interviewed earlier.

Her boyfriend is very upset and is convinced something is very wrong. The team watches the interview but Sharon is pulled away by the deputy chief. The deputy is very upset about Sharon’s poor attitude and performance during the training exercise.

Allie’s boyfriend says her ex (Trent) was violent and obsessed with her. The team goes to interview him. He lets them search his house. They find Allie’s jacket in his closet but don’t let on and instead set up surveillance on his house. The team follows Trent as he leaves but he is pulled over and arrested for drunk driving. The team questions him and he says he and Allie were getting back together.

The team questions Trent’s current girlfriend to see if he really told her he and Allie were getting back together. She confirms it is true. The team tries to figure out why Allie would leave her rich techie boyfriend for her violent ex. The team tracks Allie’s current boyfriend’s activity for the day she died and finds he purchased a $600,000 ring and had a reservation for dinner that night but never showed up.

They bring him in and tell him Allie is dead. The team lays out everything they know and Sharon taunts Allie’s boyfriend. They guess she turned down his marriage proposal and he killed her because of it. He then hide Allies coat in Trent’s closet to frame him. He gets so angry he punches Sharon in the face and is immediately arrested. He agrees to plead guilty to murder two with a 20 year sentence. Sharon finds out that an old enemy may have returned to the country and she could be in danger. Gus appears and tells Rusty he wants him to move in with him.