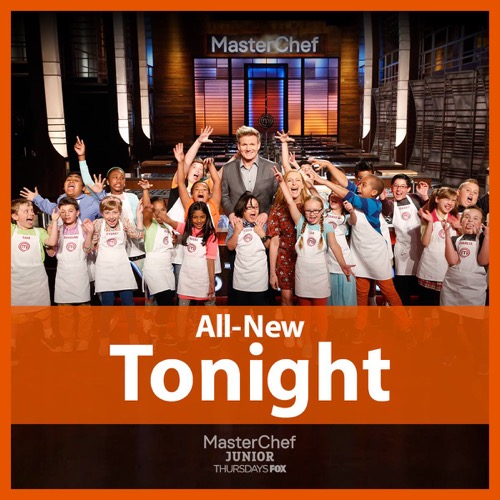 Tonight on FOX Gordon Ramsay’s Masterchef Junior continues with an all new Thursday, February 23, season 5 episode 3 called “Just Like Gordon,” and we have your weekly Masterchef Junior recap below. On tonight’s Masterchef Junior episode as per the FOX synopsis, “The Top 20 cooks compete in the first mystery-box challenge of the season, which involves both sweet and savory ingredients. Later, the contestants try to duplicate one of Gordon Ramsay’s signature seafood recipes. Chef Aarón Sánchez is the guest judge.”

They begin their very first mystery box challenge, but the main ingredient is missing. Chef Gordon Ramsay pulls out an umbrella for the judges and rice pours from the ceiling above. Tonight they have to put their own spin on their rice dish with whatever is under their mystery box; they have one-hour.

The judges are picking the 3 best looking dishes to take a closer look at. Gordon calls forward Afnan, 12 is the first one to be called up. He says his mother is the one who taught him to cook. Gordon says he is clearly born to cook. Aaron says he has great instinct for toasting spices.

Christina calls forward Cydney, 10 for her green bamboo rice pudding dish with pistachio crumble and grilled peaches. She loves her twist on the regular rice pudding. Gordon says it is delicious, fragrant and exciting. He feels she is the next Christina Tosi on their hands.

Aaron calls forward Mashu who made mushroom risotto with parmesan and shrimp on top. Aaron says the presentation looks like something he would serve in his restaurant. He tells Mashu it is awesome and nailed the rice. Gordon loves the dish and says he is definitely one to watch.

The winner will receive a huge advantage and the junior chef who won was Afnan. Gordon tells him to take a seat at the chef’s table upstairs. He is allowed to save 3 other chefs and he has chosen Avani, Eddie and Shayne. They are all safe from elimination tonight.

The 16 remaining Junior chefs are up for their first elimination challenge. Chef Gordon Ramsay is not going to tell them what to make, he is going to show them. They all come down to the front, very excited to watch Gordon make his hand roasted sea bass on cauliflower puree served with carmelized beet root and sauce vierge. They are to replicate what he is demonstrating.

Everyone says he is getting serious when he removes his suit jacket and puts on his own white apron. He explains every single detail, and they are amazed at how easy he makes it look. Everyone takes a fork and tastes everything on the plate, some of the kids are worried they didn’t come from a rich home and didn’t have these kinds of ingredients.

Aaron tells them they have 60 minutes to make their dish and Christina tells them they all have bags in the pantry with their names on it. Cydney says she is nervous because she doesn’t always eat in fancy restaurants. Adam says he cooks a lot of vegetables, and even though its a hard challenge he thinks he can do it.

Justise makes a lot of cauliflower to make sure she has extra, and since she has a big family she is used to cooking a lot. Gordon calls her a rockstar; she leans over to Elisabeth, who feels she is a bit behind and Justise tells her to keep going. Elisabeth admits to Aaron and Christina that she loves to going fishing but she doesn’t like fish.

Gonzalo says he is nervous about not finishing on time, but being from Peru he eats a lot of fish. Sam tells Christina and Aaron his family eats seafood all the time, and he prefers to be in the kitchen then on the balcony eating dinner.

As they talk, Sam burned his thumb on the boiling water; Avani and Eddie tell him to fight through it. Solomon says he loves fish, and he feels he can do this. Mark says his brother is the one who does fishing, but he hopes to impress.

Adam is told he did a great job and Gordon would be happy to have that served in his restaurant. Cydney is told by Aaron that it is a remarkable delicious dish, and she has the makings of a wonderful dish. Justise brings her dish forward, her puree and vegetables are great and Gordon loves her dish; she admits she is glad she stayed down in the kitchen to cook.

Sam comes with his dish, Christina commends him for sticking it out with the burn. She tells him it was a great effort. Elisabeth is told her beets are fantastic, but the puree is missing and the sea bass is over cooked but it was a good effort.

Gonzalo is called up by Aaron, his bass was a bit under seared and the puree was all over the place, but the cook was spot on. Mark is told his presentation was great, puree and vegetables were great but the bass was a smidge overcooked.

Lila is a little nervous because one mistake could ruin the whole dish. Gordon says she nailed the cook on the bass and the beets are incredible and the puree smooth; he says she should say a bit thank you to her dad tonight because he taught her well. Solomon is told by Christina that she is impressed he got all the elements on the plate but the bass was cooked about a minute too long.

The best cook of the night belonged to Adam. The 4 junior chefs who were on the bottom were Elisabeth, Solomon, Sam and Gonzalo. Elisabeth and Solomon are told they are very talented and dynamic cooks and earned those aprons with pride and they can keep their aprons. Gordon tells them to never stop cooking!