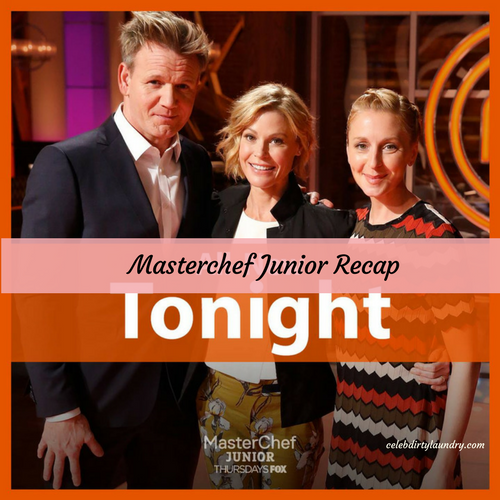 Tonight on FOX Gordon Ramsay’s Masterchef Junior continues with an all new Thursday, March 16, season 5 episode 6 called “A Presidential Mystery Box,” and we have your weekly Masterchef Junior recap below. On tonight’s Masterchef Junior episode as per the FOX synopsis, “Former first lady Michelle Obama oversees a mystery-box challenge for the Top 14 cooks that’s inspired by the White House garden. Later, Julie Bowen is the guest judge for a challenge when the kids create a dish in honor of their mothers..”

MasterChef Jr. begins with the top 14, they are greeted by Chef Gordon Ramsay and Chef Christina Tosi. They walk off the stage as he calls in one of his friends. Gordon picks up a red phone, asking to speak to the boss of the house; he then says not him… the REAL boss of the house; and he wants her right now.

Security calls and there is smoke and the American Flag appears on the TV screen; it is First Lady, Michelle Obama. She is there to deliver their mystery box challenge; they go to their stations and find ingredients inspired by the White House kitchen garden.

Their challenge is to come up with an original recipe that’s healthy and follows the “my plate” symbol which is fill half the plate with fruits and vegetables, the rest with whole grains, lean protein and dairy.

The winner of this mystery box challenge is going to come to the White House. She wishes them luck and good night. They have 60 minutes to create a national dish. Christina says they are looking for technique, flavor and the most delicious dish out there.

Top 3 dishes are called forward beginning with Peyton, who is 10-yrs-old. She made a pan-seared Branzino with strawberry, radish, kale salad and sauteed vegetables. Gordon tells her is it delicious and cooking like this gives her one foot into the White House. Christina learns Peyton watched her dad cook, but he is a middle school teacher, not a chef. Christina says as it stands she is the First Lady of the MasterChef kitchen.

The second dish they call forward is Lila, who is 9-yrs-old. Her dish was pan-seared Branzino with roasted lemons Parmesan quinoa and roasted squash. Everything is good but there is too much quinoa on the dish. Christina tells her it was a nice job. Gordon says the roasted lemon was delicious and the Branzino was cooked perfectly. He says if she keeps this up, she will be around for a long time.

The third and final dish they want to taste is Justise’s. She is10-yrs-old; her dish was pan-seared shrimp, with sauteed red and green bell peppers, with a little bit of carrots and eggplant on top of quinoa with an apple cider and herb vinegarette. Gordon says the shrimp are mind-blowing, but needed a little bit more acidity; saying its a near perfect dish. Christina say using cumin was a bold move and she did a great job; the dish is out of this world.

The home cook with the best dish heading to Washington, DC is Justise. Justise is sent up to the balcony where she finds a cake with the design of the American flag. Justise is safe from tonight’s elimination challenge.

Gordon and Christina introduce their guest judge, Julie Bowen, best known for her role as Claire Dunphy on the TV series Modern Family. She thanks them for having her and how her and her kids never miss MasterChef ever.

Tonight is all about honoring their moms through their food. Gordon tells them to look in their drawers, where they all get photos of their mom and get to share some stories about them. Julie has a surprise, Justise gets to choose 2 friends to share the cake with her; but she must explain why.

Justise says she wants to bring up some tougher competitors because in the end she wants to see if she can take them down. Gordon says he loves her attitude; she calls up Mark and Shayne. The remaining cooks have 60 minutes to make a dish that is MasterChef worthy and in honor of their mother.

Cydney made a raspberry souffle and raspberry coulis. Gordon tells her she must be mad to attempt a souffle in the biggest competition in the world. Gordon says it looks amazing, Christina said it was great, could have sat in the oven a minute more. Gordon tells her it is delicious. Julie has no idea what Gordon is saying but if her kids made that for her she’d do back flips.

Afnan comes with a Tandoori spiced swordfish with scallops and shrimp over a bed of cauliflower puree. Christina says its gorgeous, it has color, texture, its got height and vision and tells him nice job. Julie tells him it is delicious and he did a fantastic job.

Mashu brings up Japanese Surf and Turf, with rack of lamb and swordfish cake. Everyone is shocked that pureed fresh swordfish. Gordon says the swordfish was all wrong, and confused him, although the encrusted lambchop was great.

Evan makes apple crisp with caramelized pears and sugar sauce. Christina loves that he did a dessert but he is missing too much of the crumble.

Jasmine brings up Chicken Curry with Jasmine rice and fried plantains. Gordon says she nailed the spices, and her dish tonight would impress her mother for sure.

Peyton did a New York Strip with squash, eggplant and chimichurri sauce. Julie says this is the first time she is eating steak since she was 18 and in boarding school. She said you could put the chimichurri sauce on a shoe and you could eat it; telling her she hopes her mom loves her food as much as she does.

Donovan brings up his marshmallow pie with caramelized fruit, chocolate ganache and raspberry sauce. Christina says it looks like Donovan is in trouble, he didn’t make a pie and forgot to remove the pie mold. He is crying because he doesn’t want to go home on a challenge for his mother.