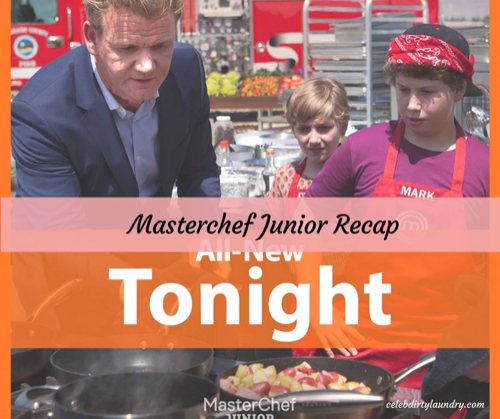 Tonight on FOX Gordon Ramsay’s Masterchef Junior continues with an all new Thursday, March 9, season 5 episode 5 called “Kitchen Emergency,” and we have your weekly Masterchef Junior recap below. On tonight’s Masterchef Junior episode as per the FOX synopsis, “The Top 16 cooks compete in a team challenge to prepare a filet mignon lunch for first responders, whose votes will determine the winning group.”

MasterChef Jr. begins tonight with the kids rushing in being greeted by Chef Gordon Ramsay and Chef Christina Tosi. Tonight they are told their next challenge, they will not be cooking in the Master Chef kitchen and its time for their very first MasterChef Junior team challenge. Shayne (red) and Adam (blue) are the captains and choose who will be on their team.

They arrive at Cal Fire the most active air attack base in the entire nation. This is the home base for some of California’s bravest first responders. They are like super heroes and today they are going to honor them by making them lunch to thank them for their hard work and service.

51 first responders will be there for lunch, they will have 75 minutes to create 51 entrees, the side will be their choice but the protein is going to be filet mignon.

Gordon Ramsay tells them the meat is to be cooked to a perfect medium rare with 2 sides and a delicious sauce; each responder will get a dish from both teams, then vote for the dish they liked the most. The team who loses will be up for elimination, and both Gordon and Christina will be watching closely to see who will definitely be leaving the competition.

The red team is immediately assigned duties from Shayne and appear to be very organized, the blue team isn’t so sure about the menu, but no one speaks up. Christina says it is a very difficult cut of meat that has to be cooked last minute or it doesn’t hold. Gordon says this is a unique chance to see which ones crack under pressure.

Mark, the self-proclaimed grill master, is already cooking the steaks and Christina calls Shayne over saying they have 65 minutes left of the challenge and the meat can’t be cooked already because if it dries out, its the kiss of death. Christina reminds them to focus on their sides and sauces right now and start the meat in 25 minutes. She tells Shayne to remember to taste everything.

Gordon stops Adam and the black garlic on the steak. Adam is told to stop with the gnocchi as it would take them too long and to change his side. After Christina says the red team already put on their steaks and Gordon explains about the gnocchi, he says the first responders will be arriving shortly but it looks like the emergency is in both kitchens.

The kids are so excited to see everyone arrive, but they look hungry and are determined to get their food out. Shayne is a good cook but he isn’t directing his team. Gordon says they are so disorganized it’s a joke; he orders him to get his team going and delegate the jobs and he does.

On the blue team the demand is taking its toll on Charlie. He looks like he isn’t feeling well and he needs a break and leaves to see the medics. Christina asks him to cheer his team from the sidelines, after all the hard work he did with the potatoes.

The first responders are excited for the food and definitely impressed about such young cooks creating an amazing meal. Let’s hope they can impress their esteemed guests. His team is sort of complaining that Adam is running around like a chicken without a head and isn’t really helping anyone.

Service stops on the blue team when Adam is serving raw steak, He tells the captain to get some standards, everyone is yelling at him but he feels too much pressure and feels like he can’t do it and the blue team is falling behind. Gonzalo steps up and takes over, saying he can take lead the blue team to victory; telling them all to communicate.

Gordon realizes there is not enough potatoes for the responders, each team mate blames the next. Christina tells Gonzalo to stop yelling at everyone because they are all on the same team. He is screaming but doing no cooking, Gordon tells him to stop shouting and to cook and listen to his captain, Adam.

Meanwhile the red team is working very well together as Gordon reminds Shayne to say please and thank you to the servers; until Christina brings back dishes that have completely rare steaks. He asks if they want to go home and that piece of crap if fit for a coyote. He says only the best will do and if they can’t, they should just get back in the firetruck and leave.

The blue team has pulled it together and their confidence has definitely grown, encouraging each other and getting all their food out. The red team really pushes to get the last of their dishes out. Blue team is the team who finished first and Gordon tells them to relax and grab a drink.

Gordon introduces the young cooks, between the ages of 8 and 13, to all the first responders, saying how honored they were to serve them today. The responders are asked to cast their votes and the winning team won with 58% of the votes. The red team won, which means the blue team will be losing 2 cooks.