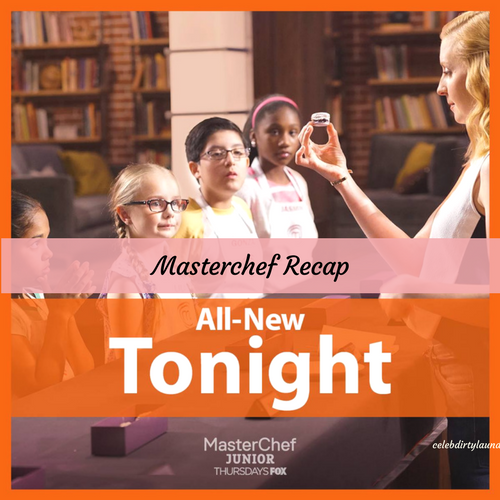 Tonight on FOX Gordon Ramsay’s Masterchef Junior continues with an all new Thursday, April 6, season 5 episode 9 called “Scouts Honor,” and we have your weekly Masterchef Junior recap below. On tonight’s Masterchef Junior episode as per the FOX synopsis, “The Top 12 cooks split up into two teams and head for the great outdoors to serve Girl Scouts, Boy Scouts and their troop leaders a pork chop entrée and two side dishes. Later, the losing group must make a box of macaroons in a pressure test.”

MasterChef Junior begins tonight with Chef Gordon Ramsay and Chef Christina Tosi bringing the remaining 12 young cooks on a hike in the San Clarita mountains, where they go to a MasterChef kitchen out in the open.

This is where their next team challenge will be, they are to cook for 50 Boy and Girls Scouts leaders and scouts. They will be working in 2 teams of 6 and the captain of the Blue team is Peyton and Evan for the Red team.

A coin is tossed and Peyton gets to pick the first person for their team. Blue team is Peyton, Justice, Jasmine, Shayne, Gonzalo, and Lila and the Red team is Evan, Mark, Cydney, Afnan, Adam, Avani. Chef Ramsay produces a bone-in porkchop as their protein. He gives them 75 minutes to prep and cook an amazing camp cook-out dish and 1 hour to serve it.

Christina says the winning team is automatically in the Top 10, the team that doesn’t win will compete in an elimination challenge after which 2 cooks will go home.

The Blue team seems to mesh together but Ramsay asks if they want to win this when he learns they are serving gravy. When Captain Peyton tells Shayne to make a vinegarette, he says he doesn’t want to do it but Ramsay pushes him to do it.

The Red team’s menu bothers Ramsay too when he shows them they are using small potatoes to make potato pancakes with. He asks if they are crazy? Cydney says she said that from the beginning, but no one is listening to her.

The scouts start to show up, some say their expectations are really high, while others expect a five star restaurant dish, unlike hotdogs and hamburgers. Ramsay finds out that Justice put the pork chops into the oven before searing them. He tells them to take off their aprons but Shayne says they are not giving up; he suggests they prove it.

All the scouts rush over and the Red team has no pork chops done and Mark is burning the ones they have. Ramsay sends the scouts over to the blue team instead. Christina comes over to encourage the Red team to get the food out because they are close to losing votes. After she tells Evan they cannot rely only on Mark for the pork chops he assigns Adam to help him.

Chef Ramsay comes to the Blue team concerned about their pork chops, he cuts on open that is on a plate to be served; he says it is so raw it is on the verge of being alive. No one wants to own up to putting the pork on the plate. Christina asks for feedback on the dishes while the scouts who are done eating shoot an arrow at the target they liked. The Blue team is done first.

Christina and Gordon introduce the Red and Blue teams to the scouts. Gordon announces one team scored 63% while the other got 37%, and Christina says the winning team is the RED team, as red smoke blows behind them.

Back in the MasterChef Junior kitchen, the red team is on the balcony and the blue team swaps their blue aprons for their white ones. The young cooks are facing their first pressure test, and at the end 2 of the cooks will be going home.

Christina lifts the box and says these things are Cosmopolitan, the second box comes off as she says they are colorful; they are classy, as she lifts the 3rd box. There is a tiny box left and Gonzalo jokes they are going to have to cook a box?

She slides the box open saying tonight they have to cook them a beautiful box of macarons. Delicious almond meringue cookies, that smooth hollow top, that ruffled bottom edge, that rich thin center, layered between butter cream or ganache. She says they are small cookies but take an incredible amount of technical skill.

The cooks are given 1 hour to make a stunning, delicious box of macaroons. Chef Ramsay tells them as many perfect ones they can fit into that box. He reminds them the timing and baking temperature have to be spot on and the flavor of their macarons is up to them.

Christina says they have all the ingredients at their stations to make the macarons, the equipment room is there to customize them with fruits, food coloring, spices and chocolates. By the time 1 hour is up, their box must be at the front on the bench.

Gonzalo is nervous because he has never eaten a macaroon or made them before, he feels he is at a weak point. Lila isn’t a baker either but she is excited about her combination of flavors. Shayne is making bacon macarons, Chef Ramsay wishes him good luck but doesn’t think it will work.

Christina comes to see Justise, who is making hers in honor of her family, as they love peanut butter and jam/jelly all the time. Gordon stops to see what Peyton is up to; she admits she has never made macarons before but when she was in Paris they were selling them on every street vendor. She says she has eaten them enough times that she thinks she can do this.

Lila drops her tray after she just went to knock the air out of them before she put them in the oven with 35 minutes to go. Christina tells Lila they still have batter and time. Gordon rushes over and tells her not to worry and get it together, and she can overcome this. From upstairs, Mark is encouraging her to keep it together.

All 6 of them manage to get their boxes to the front with no time to spare. Peyton is first up, hers are blackberry with blackberry buttercream and black cherry jam. It looks great and its delicious, Christina says she did a nice job and should be impressed with what she accomplished.

Gordon calls Shayne up next. He made a bacon maple macaron, Christina’s eyes widen as Gordon shakes his head that the bacon is in the cream. Technically they are very consistent, but the center cream is too greasy, like eating sweet, raw butter. Gordon tells him he needs to understand one thing, classics are there to be respected.

Justise’s box looks amazing. She made PB&J macarons with peanut butter cream cheese filling and homemade blueberry jam. Christina says there may be a bit too much filling but she did a fantastic job.

Lila admits this challenge was very difficult for her. She made pink lemonade macarons with a raspberry coulis and lemon zest. Gordon says visually they are beautifully colored and smell fragrant. When he tastes them, they are overcooked, she nailed the icing though; she cries.

Gonzalo admits he did bad before Christina even opens the box. Christina asks him what is going on with the box, when she sees the mess inside. He says everything that could have gone wrong, went wrong. He says this was not his best challenge. He made raspberry macaron with buttercream frosting. When she tastes it, she says the flavor is great, but they were under-mixed and could have used another minute or 2 in the oven.

Jasmine made pina colada macarons with fresh pineapple puree and lime zest. She said she wanted to show her Jamaican side with these. Gordon says they look beautiful. He tells her they are delicious and she raised the bar for the whole competition. He welcomes her back!

Christina calls the cooks to the front, as her and Gordon decide who is staying in the competition. She asks Peyton, Justise, Jasmine to head upstairs to be in the top 10. Lila, Gonzalo and Shayne are in the bottom and Gordon asks Gonzalo and Lila to step forward; Cydney begins to cry.

Lila is crying as Shayne is sent up to the balcony. He tells them both they have been so strong in the competition, polite and gracious, ambitious. They both nod when he asks if they enjoyed themselves. He says it has been a blast and tells them to come and say goodbye.