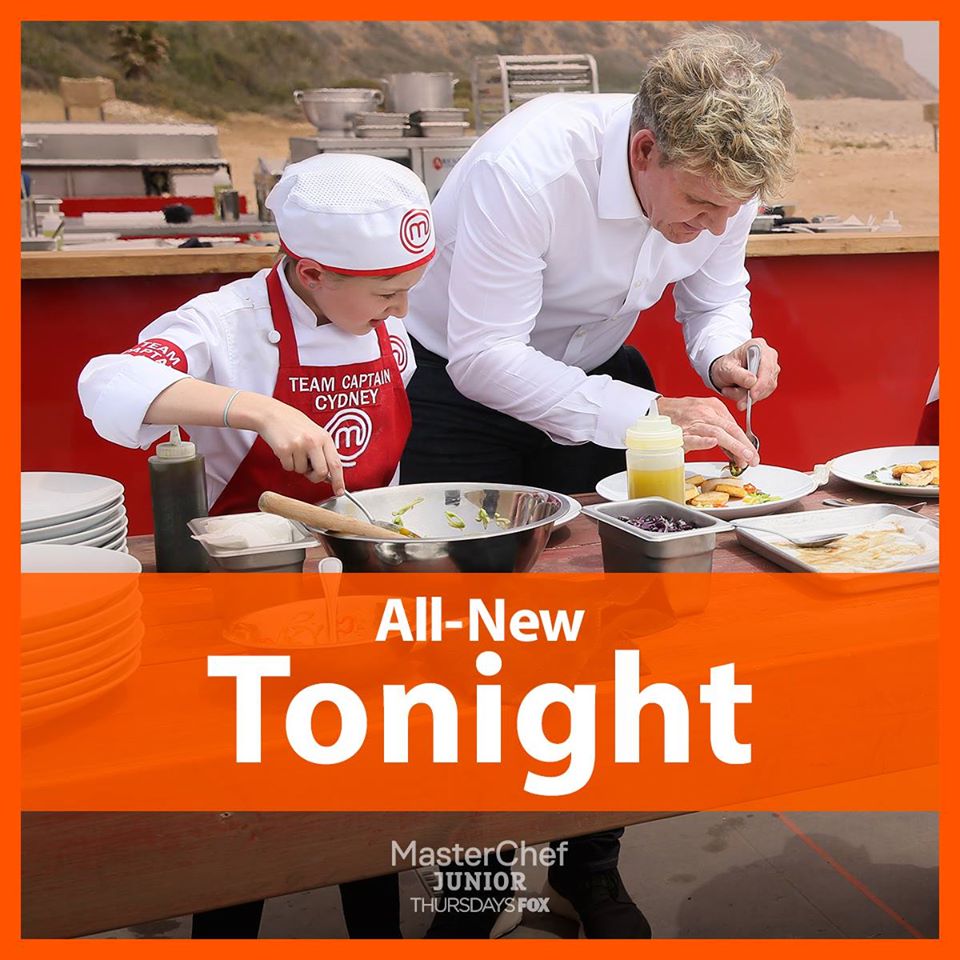 Tonight on FOX Gordon Ramsay’s Masterchef Junior continues with an all new Thursday, May 11, season 5 episode 13 called “Pop-Up Restaurant,” and we have your weekly Masterchef Junior recap below. On tonight’s Masterchef Junior episode as per the FOX synopsis, “A pop-up restaurant on the California coast is the setting for a team challenge that involves cooking for food critics, chefs and journalists, who dine on scallop appetizers and red snapper entrées.”

MasterChef Junior begins tonight with Chef Gordon Ramsay and Chef Christina Tosi greeting the top 6 junior cooks. Gordon tells them there is going to be a team challenge and the winning team will officially make it into the semi-finals. Christina announces they will be working in 2 teams of three and the Chefs will be picking the teams

They are not told what the challenge is but Gordon says Christina will drive the red team and he will drive the blue team. Gordon jokes they need helmets and they end up on dune buggies, doing donuts as they drive. The chefs are screaming and cheering until they arrive at their kitchens on the beach.

Christina tells them they need to make a Pacific Ocean side lunch for restaurant owners, foodies and journalists and the VIP guests have no idea it is children cooking their meals. On the menu is pan roasted scallops with polenta cakes and fried quail eggs. The entree is pan seared red snapper with purple potato gnocchi and saffron lemon broth.

Chef Ramsay shows them how to make and plate the dishes. Christina tells the young cooks they have an hour for each dish and Gordon informs them they will be the ones who pick the winning team.

Justise quickly tells her team what has to be done and who is doing which, while Cydney is more soft spoken and both Evan and Adam worry about her being able to lead them. As they hustle, the guests begin to arrive and Gordon and Christina begin calling out the table tops.

The red team quickly falls behind as Cydney is burning all the polenta cakes, not using the proper utensils. Gordon tells them to get a grip and says this is a joke. Christina tells the blue team this is the semi finals and they need to push themselves.

Gordon rushes to the red kitchen attempting to comfort Cydney who is crying. He tells her to stop, be strong and start acting like a team captain. They quickly regroup and are able to get their first order done. The blue team is also having problems with the scallops but Justise gets them to work together and are able to get their first table top out.

In the red kitchen, Evan starts to crack under the pressure and keeps breaking the quail eggs. Ramsay tells him to stop giving him excuses and to start giving him quality; he pulls the team together and says they need to help each other, saying Evan’s eggs look like his grandmother’s knickers. It appears Shayne’s quail eggs are not any good either and Christina says the pan is too hot, she tells Justise this is her team and she needs to get in the game. Shayne continues to struggle and Gordon says at this pace it would be quicker to hatch a little chick.

The blue team is way behind and Gordon yells they are 9 eggs short and Shayne struggles to finish the appetizer round on time. Evan frets the red team cannot lose over eggs and Christina tells them to push and they all shout for service. Christina tells them to get it together and get ready for the entree round as Gordon tells the blue team the red team is done and orders them to serve their appetizers without the eggs. He encourages them to talk it out as a team.

As they prepare to do the entrees Gordon tells both teams they need to step up their game and he wants to hear them communicate more. Christina says they need to be tasting everything as it is crucial for proper execution. Justise is very vocal with her team and Christina is proud to hear her voice and to keep it up.

The red team continue to struggle and within minutes of starting Cydney beings to break down again. Adam feels they need a strong captain or they are going to fail. Gordon tells Cydney to put down the pan, he tells her there are 4 portions of gnocchi in her pan and no snapper ready. He takes her frying pan and throws it on the beach as she begins to cry and he tells Adam to take over.

Gordon gives the red team a pep talk, saying he is not going to go through that again like the appetizers, telling them it was embarrassing. He wants Cydney to tell him the truth if she can lead her team to victory, she says the best thing for her team is Adam. She is upset but admits she can’t stay team captain if its going to overwhelm her this much.

Justise and the blue team are thriving; she says it is really stressful but they are working well. The red team is finally on the rebound with Adam as captain; Christina is really proud of him and tells him to keep it up. Adam strongly believes he should be in the semifinals.

Justise pushes Shayne and their timing screws up the fish; Gordon catches that it is raw, saying it could still be swimming and there in California they call it sushi and throws it back towards the ocean. Shayne insists he can cook the fish and Justise rushes him again.

Adam is ready to serve the last of their entrees and Gordon notices the fish is raw. He tells Cydney to stop crying and put it back in the pan. Adam tells him one-minute until the fish is properly done. Meanwhile the guests are filling out their comment cards and they seem to be split on which was better. Gordon reminds them the importance of team work and tells them to drink some water and gas down. Christina pushes the red team to the finish line.

Christina and Gordon introduce the VIP guests to the junior chefs who cooked their meals; everyone claps and cheers. Since it is a competition, only one team can win and Gordon announces the decision will be decided back in the MasterChef kitchen.

The 6 young chefs stand at the front of the kitchen as they learn the team that is safe tonight and through to the semifinals is the blue team; Shayne, Jasmine and Justise celebrate and head up to the balcony and will be in the top 4.

Gordon announces that Adam is heading upstairs and the final chef in the top 4 and semifinals. Cydney and Evan are going home. Christina says it wasn’t about winning or losing as they are both great cooks. Gordon tells them to come and say goodbye and encourages them to never stop cooking and baking.