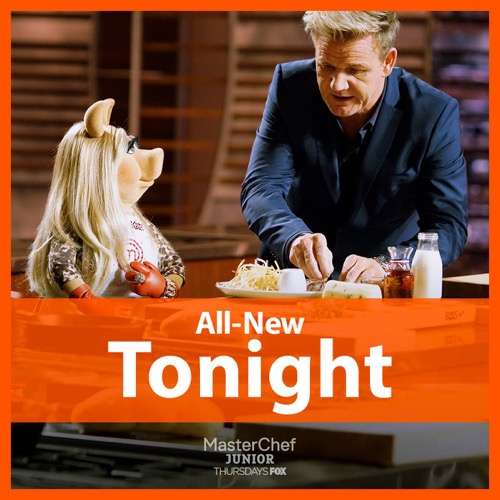 Tonight on FOX Gordon Ramsay’s Masterchef Junior continues with an all new Thursday, May 4, season 5 episode 12 called “The Muppets Take MasterChef,” and we have your weekly Masterchef Junior recap below. On tonight’s Masterchef Junior episode as per the FOX synopsis, “The Top 6 contestants split up into two teams and have 75 minutes to prepare an entrée for a guest list that includes firefighters, professional softball players, construction workers and pilots.”

MasterChef Jr begins tonight with Chef Gordon Ramsay and Chef Christina Tosi greeting the final 6 young homecooks. Tonight they will have a team challenge with 2 teams of 3. Jasmine and Adam are the team captains, Adam is red and Jasmine’s is blue.

Adam chooses Justice while Jasmine picks Shayne. Adam picks Cydney and Evan is on the Jasmine’s team. The MasterChef restaurant will be open to special guests but Chef Ramsay wants to know what the junior chefs aspire to be outside of the kitchen. Shayne says he wants to be a police officer or a preacher. Adam says since he loves the science aspects of food, he’d want to be a test kitchen operator creating recipes. Jasmine would like to be a plastic surgeon to help children with cleft palates.

The teams go to their stations and open their crates, inside there are 3 proteins to choose from: rack of lamb, monkfish or little net clams. There are 20 dinner guests who will taste both teams’ dishes and vote for the dish they preferred the most; the team that wins has a huge advantage. Christina gives them 75 minutes to conceive, create a fully composed entree.

Jasmine is loud and directive with her team as they chose monkfish for their protein. Adam is more quiet and they are concerned that Adam forgets he isn’t a one-man team and if he doesn’t stop trying to stand out it will be his tragic downfall.

Twenty-five minutes into cooking, Chef Ramsay tells them about their guests who are about to arrive. He shares that their VIP guests are a group of people who have dedicated their lives to making their childhood dreams come true including NASA scientists, ballerinas, cowboys, pilots, doctors, Olympic athletes, firefighters, construction workers, 2 members of the United States army and chefs. The chefs feel the pressure but are determined to make their guests proud.

Adam tells Chef Ramsay his red team is making a mint and pistachio encrusted rack of lamb with green bean, fennel, and cucumber salad with roast potatoes and tzatziki sauce. Chef Christina comes to visit Jasmine who shares her blue team is making monkfish with torched baby tomatoes with a buerre blanc sauce and porchetta, spinach and lentils.

As they are talking, Evan tells Shayne he is overcooking the fish. Christina tastes it and says it is okay, but he cannot let them cook any more than that. They have 20 minutes left and Adam begins to slice his lamb, Ramsay quickly stops him as its too early and the meat will dry out.

Christina comments that this is what Adam always does, he cannot cook the meat and be a team leader at the same time. She also worries the blue team has a great idea but she doesn’t think they can execute it properly.

Both chefs are yelling for the teams to work together on the plates. They are stressing they won’t get it done on time. With 60 seconds to go, Cydney can’t find what she needs to plate, but they manage to plate everything. After the plates are served, Christina tells them to take a breather outside.

Once the dinner is finished, the guests are introduced to the junior chefs who cooked their meals. Chef Ramsay announces the vote was very close as the winner only won by 55%. The team who wins the huge advantage is the BLUE team, meaning Shayne, Evan and Jasmine get the advantage, but still need to cook in the elimination challenge. Their advantage is they get 5 extra minutes to complete it.

Behind the Chefs is a huge box, hiding 2 big surprises; inside is The Muppets Miss Piggy and Swedish Chef.

Chef Ramsay and Chef Christina join Miss Piggy and Swedish Chef and reveal the challenge was designed by Miss Piggy. They will all have to make Steak Frites, her favorite dish. Ramsay makes the junior chefs laugh and cheer when they learn Miss Piggy is also joining the competition. She protests until she is presented with a bedazzled white apron with her name on it. As she goes to her station, Evan jokes that she can’t be in the competition because what will happen when she needs to cook with bacon?

At their stations they have everything they need at their station to make Steak Frites with peppercorn sauce. Christina announces the losing team has 25 minutes but the winning team has 30 minutes and they start first. Swedish Chef talks to Ramsay and Christina, Christina agrees with him while Ramsay has no clue what he is saying.

When they hit the 25-minute mark, Miss Piggy makes a call to order some Steak Frites and Chef Ramsay comes over saying that isn’t allowed and tells her to concentrate.

Christina and Ramsay begin to visit each station when Miss Piggy calls Chef Ramsay “Gary” and to get over to her station. She wants to know what he was talking to Cydney about and demands him to show her too. He starts the sauce for her and tells her to shake it as he leaves.

She calls “Garland” back and he season and starts cooking the steak, saying he needs to render the fat; she asks him who he is calling “fat”? He says he will be back in a minute. Justise tells Christina she definitely doesn’t think Swedish Chef is a better chef that Gordon.

With 5 minutes to go, Miss Piggy calls “Gerard” over. He says the steak looks great but she hasn’t made the fries yet. He puts the fries in and shakes the basket to prevent them from sticking together, but she asks him if the steam is good for his pores. He says this is a kitchen not a beauty salon, she says it’s two birds, one stone. He leaves telling her to keep an eye on them for 2 minutes.

Christina encourages Adam to stay focused as someone is going home tonight. They have one minute to go and she tells them they can do this. Gordon and Swedish Chef count down from 5. Miss Piggy looks down at the dish Chef Ramsay made for her and she says it looks nice and she did a good job.

First up is Justise, who is worried she didn’t have enough time to let her steak sit. She knows its not MasterChef worthy but she hopes the chefs like it. Christina says she nailed the cook on the steak and did a strong showing tonight. Swedish Chef makes the two halves of the steak talk to each other and gives her the okay.

Shayne the Train brings up his dish as Chef Ramsay says the individual tonight who should absolutely nail the steak is Shayne. He is impressed how well the steak is cooked evenly on the outside, the seasoning is great, the fries are crispy. He tells Shayne that if he continues to cook like this he will be around for a long time. Swedish Chef makes Shayne try a piece and then he moos at him, giving him the okay!

Jasmine is up next, she feels she started her sauce too late but thinks overall she did well. Her steak is more medium than rare, the fries are crispy but she nailed the flavoring on the steak.

Adam’s steak is closer to medium than medium rare but it tastes great. The fries are crispy and the sauce is delicious but Ramsay worries he may go home for having a steak that was overcooked by 2 minutes.

Evan presents his dish to Christina. He admits he felt pretty confident cooking steak because he has done it before at home; but he doesn’t eat it often because its not his favorite food. She says that is a shame because he nailed it, the only downside was he should have separated the shoestrings before they went into the fryer. She tells him he is becoming a real contender in the competition. Swedish Chef plays with the steak and says okie-dokie.

Cydney is worried she got distracted by Miss Piggy and approaches the Chefs in tears. She cries, telling Chef Ramsay she doesn’t think she did great and she thinks its under but doesn’t want to leave the competition. He hands her a napkin and tells her to let them taste it. He cuts the steak open telling her it is beautiful and Christina says its stunning. Swedish Chef calls her over to him and he hugs her saying she did well.

Miss Piggy brings up her dish, Christina says she is impressed with the dish. Chef Ramsay tells Swedish Chef that he made the dish, not her. Christina says its as good as a Gordon Ramsay steak and its almost too perfect. She again says she made it as Christina says she nailed it and this is a Master Class Steak and Frites.

Swedish Chef approaches her dish and asks if she made the Moo-Moo, when she says yes, he begins to throw the food at her. Chef Ramsay calls everyone to the front as Christina says they need to talk about who is going home. Christina says Miss Piggy nailed the dish and Ramsay confesses that he made the dish. Swedish Chef looks at Miss Piggy and slices his finger across his throat.

The top 3 dishes were Justise, Evan and Jasmine’s. Chef Ramsay says they have to unfortunately say goodbye to someone tonight. He tells Shayne he is safe; He says its not Adam as he is safe and Cydney begins to cry saying it is her. Chef Ramsay tells her its not her either and she is safe. She looks at him startled and all the kids begin to giggle at Miss Piggy.

Christina tells Miss Piggy she lied and Ramsay says he was the one who made her dish. She tells him apparently that’s the problem, that he should have just gotten out of her way and she would be lifting that MasterChef trophy right now. She pretends to cry, saying she is sad to be leaving and then says she is joking that this is an amazing kitchen and she had so much fun but she is ready to go back to her Twitter.

She says Christina was lovely to work with but the other guy was there too. She calls him “Gunther” “Gable” “Goober” “Gomer” … whatever!