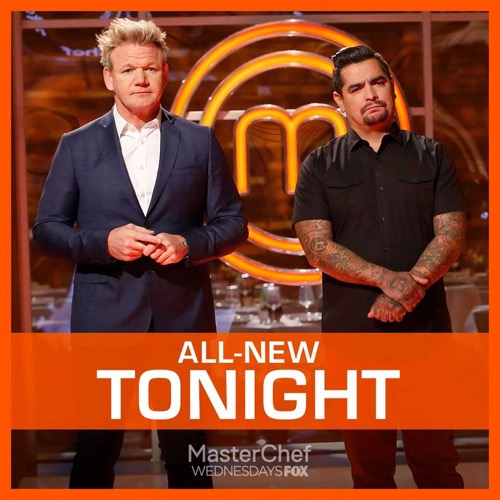 Tonight on FOX Masterchef returns with an all new Wednesday, June 14, Season 8 episode 3 called, “America’s Grocery Bag,”  and we’ve got your MasterChef recap down below! On tonight’s MasterChef Season 8 episode 3 as per the FOX synopsis, “The Top 20 chefs compete in the first mystery-box challenge of the season, which involves preparing a dish using a dozen popular ingredients found on many American home cooks’ shopping lists.”

MasterChef begins tonight with Chef Gordon Ramsay, Chef Christina Tosi and Chef Aaron Sanchez welcoming the Top 20 home cooks revealing the winner will receive $250,000, and a guaranteed spot on the next MasterChef Cruise and of course, the coveted MasterChef trophy.

They start off tonight with their very first Mystery Box challenge of the season. Under the box is a brown grocery bag filled with 12 of the most common things found on any American’s shopping list. They have one hour to take the top ingredients and the items they chose from the standard MasterChef staple pantry box; winning the challenge gives them a huge advantage moving forward.

The Chefs meet with several of the homecooks, who hear a bit about the cooks and their reasons for being there and what they are making, surprisingly a number of them are making breakfast. Chef Ramsay says its incredible all the intensity in the first mystery box challenge. He reminds them they really wanted to get their hands on that huge advantage.

Ramsay says there were 3 dishes that stood out and calls Sam, Heather and Mark forward; he then tells them they stood out for all the wrong reasons and all three dishes were a mess. Chef Aaron Sanchez tells them they are the bottom 3 and need to go to the wine room.

Chef Christina says the next 3 really impressed them; Yachecia comes forward with her biscuits and gravy with chicken-apple sausage. Christina loves that she had to make her own buttermilk. Chef Ramsay tells her it is delicious and tastes expensive. He says he would simply put a touch less cream. Chef Aaron tells her it was well done, a lot of spices but nothing over empowering. Chef Christina agrees that she “churched” up regular ingredients.

Chef Aaron calls Jennifer down, saying she made Louisiana proud. She made a blackened chicken breast with an etouffee sauce and cinnamon potatoes. She shares this is her art on a plate and he says it truly is a beautiful blackened breast, the sauce is rich, saying if she keeps cooking like that, she is going to go far. Chef Ramsay says the chicken is crispy, fragrant and its nice to see that level of finesse so early on in the competition.

Chef Christina says Brien O’Brien is the third cook who kept it simple but delicious, asking him to bring his dish forward. He made fried chicken with broccoli and bacon slaw, and jojo potatoes. Christina can’t get over the crispiness of the chicken breast, she says the jojos are smart and rustic. She wishes he cut the shallots down a little more, but feels its an untouchable dish. Chef Ramsay says the chicken is delicious and totally coated properly; he loves the rustic charm but needs a little color; saying he is showing great skill.

Chef Ramsay says they were 3 outstanding dishes but the dish of the night was cooked by Brien O’Brien. He is safe from elimination and is congratulated on his great start. Christina announces all 3 are safe from elimination but Ramsay counters that everyone in the kitchen is safe minus those in the wine cellar. He tells all 17 of them to head up to the balcony.

Sam, Heather and Mark are called back into the kitchen, where they are about to learn their fate. Chef Ramsay announces their dishes concern them, they are underwhelming and disappointing. He even calls them disgusting, saying all three of them are facing elimination and their dishes don’t have a place in MasterChef kitchen; they are given 3 brown bags and told to go back to their stations.

Sam, Heather and Mark are given the exact same ingredients and a refilled pantry box. They are told this is their chance of redemption, they can listen to the advice they were given or make an entirely new dish. This time they only have 45 minutes and all 3 are definitely up for elimination, no one is safe!

Christina says this is a MasterChef first where they are giving them a second chance. Heather is the only one changing up her dish a little bit. Sam is making the exact same mistakes he did the first time. Mark is in slow motion, the cooks on the balcony are shocked at hi, putting raw bacon inside his raw eggs. Christina tells the other two it seems that Mark just checked out and doesn’t care.

After Chef Ramsay gives Heather some advice, Mark turns to her and says, “Do what I do Heather and ignore them!” Sam disagrees. Chef Ramsay asks Mark if this is a big joke to him and tells him either take is serious or take his apron off. Everyone feels Mark doesn’t belong here. With 2 minutes to go, Mark brings his dish down to the front while Heather and Sam rush to get there before time runs out.

Chef Ramsay comes to Sam who made meatloaf with mashed potatoes and carrots. Its not the prettiest. He says it does taste better than the first round, he is encouraged to pace himself and prioritizing is what he needs to learn. Chef Christina says its not visually appetizing but it taste delicious. She says this one is a definitely better written story, but she isn’t sure its MasterChef worthy!
Chef Aaron tastes Heather’s dish, Chimichurri Chicken kabob with vinaigrette and french fries. He says the chicken looks a lot moister, its a difference between night and day in the taste, he says her dish is well-done. Chef Christina says there is heat and flavor, the dish is visually more appealing, but she has to see if this was enough to keep her in the competition.

Chef Ramsay approaches Mark, asking if he has done better than he did earlier. His dish is chocolate chip pancakes with baked eggs, bacon and cilantro. He says his dish is tough to look at, asking him if he is just going through the motions. Mark thinks this is the best breakfast he has ever cooked and feels he scored a touchdown. Eboni whispers that Mark’s a douche.

Chef Ramsay says it tastes nice, but he didn’t maximize those 90 minutes wondering if he is hungry enough to be the next MasterChef? He feels he is as Eboni smirks. Chef Christina wants to know if a chocolate chip pancake and baked eggs is even worthy of this competition.

The judges discuss whether they should send one or all home, even though there was improvement. Chef Ramsay says some of them stuck to their guns and some of them changed their ways. He tells Sam and Heather to make their way to the balcony because they showed enough improvement.

Mark is told his second attempt at an American breakfast wasn’t good enough, his time wasn’t utilized properly and they don’t feel the hunger. Chef Ramsay says he personally doesn’t think he is worthy of becoming a MasterChef. He asks him to return his apron to his station and go home!