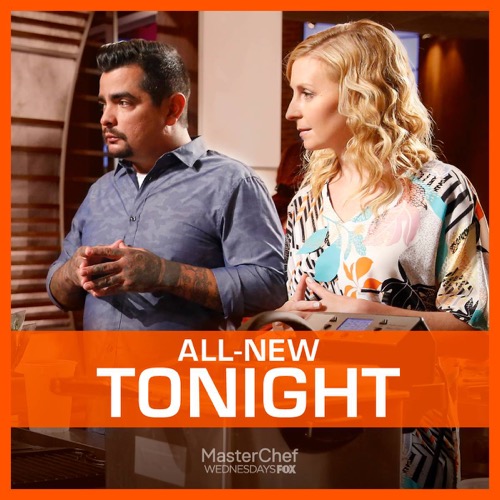 Tonight on FOX Masterchef returns with an all new Wednesday, June 28, Season 8 episode 5 called, “Feeding the Lifeguards,”  and we’ve got your MasterChef recap down below! On tonight’s MasterChef Season 8 episode 5 as per the FOX synopsis, “The Top 18 cooks compete in a mystery-box challenge that includes preparing shellfish, which is followed by an elimination round that entails creating a Gordon Ramsay classic.”

MasterChef begins tonight with the home cooks entering the MasterChef kitchen where Chef Gordon Ramsay tells them they are being tested in their next big mystery box challenge. Chef Aaron Sanchez tells them to lift their boxes, finding some of the finest shellfish the world has to offer. Jason is dancing with confidence; Chef Ramsay gives them 60 minutes to make the best shellfish dish of their lives.

Chef Christina Tosi and Chef Aaron approach Jeff who is making a sauteed mussel dish with chorizo and some shrimp, making it with some Spanish flare. He tears up telling them he is cooking for his 3 month old son, wanting to make him proud. Both Christina and Aaron love his passion.

Chef Ramsay comes to see Jason commenting on his face looking like it was Christmas morning. He is working with the clams, some shrimp and making tempura spot prawns. He wishes him good luck with 15 minutes remaining.

Christina and Aaron visit Newton’s station who unfortunately loves seafood but coming from North Texas ranch country has to drive too far to get fresh fish. He is working with mussels and soft shell crabs. He chokes up that his wife, family and friends are supporting him to taste the dream.

10 minutes left, Chef Ramsay is impressed with Jason, telling Aaron and Christina how well he is doing. They share that Jeff is going the Spanish route. Newton is seizing the day by working with 3 different shellfish he isn’t familiar with.

Chef Aaron calls up Jeff first, who says he is in it to win it as this is a tribute to Tampa. He made Sauteed Mussels with chorizo, prawns and garlic. Aaron likes the smooth light broth but he thinks he should have added couscous to soak up the broth. Chef Ramsay says it is delicious, loves what he did with the ingredients and feels there is no stopping him.
Chef Christina tells Necco to step forward and its his first time in the top 3. He made Uni Tagliatelle with roasted spot prawns and southern mussels casino. When she tastes it, and loves the spot prawn. She says he was smart with his preparation and tells him if this is what he has under his belt she is excited to see what else he has. Chef Aaron says his pasta is spectacular and if this is what he’s got with three different shellfish, everyone behind him should be taking notice.

Chef Ramsay says the third and final person coming forward, they can really see this person’s passion on their plate, he asks Jason to come up with his dish. He jokes that he has never seen a smile so wide. He shares that this passion comes from his parents coming from Taiwan and these ingredients were saved for special occasions as they didn’t have much and he wanted to treat them with respect.

Jason’s dish was Tempura spot prawns with uni-yuzu mayonnaise and clams in shellfish broth. Chef Ramsay tastes the dish and tells Jason he loves him, and this is what he calls 60 minutes of effort. Chef Ramsay says it is a work of art and for the first time he wouldn’t change anything. Christina says the broth is out of this world, the tempura reminds her of every trip to Japan.

Chef Ramsay announces Jason as the top dish, who is safe from elimination and for the rest of them, their elimination challenge starts now. They are making a Gordon Ramsay classic and he is going to show them how to make one of the first things that he mastered: scrambled eggs with roasted vine-tomatoes and grilled mushrooms.

Eboni admits she has never made a scrambled egg before. Everyone watches intently as Chef Ramsay shows them how to make them. Chef Aaron tells them to head back to their stations after the demonstration, they have 15 minutes to make a perfect plate of scrambled eggs, roasted vine tomatoes and grilled mushrooms.

The Chefs go to each station to taste the food. Gabriel is sent upstairs as Jeff is not safe. Newton is safe, Sam is the same as Jeff, under seasoned and not safe. Jenny goes upstairs as well as Brien. Heather’s tomatoes are wilted, no mushrooms on her plate and the eggs are not seasoned so she isn’t safe.

Yachecia is staying down with her disastrous dish. Dino’s eggs are over cooked, rubbery and bouncy; he is not safe. Caitlin’s eggs are under seasoned and not safe. Necco feels his eggs are tasty, they agree and he goes upstairs. Eboni is very nervous about her eggs but Chef Aaron feel she nailed it, sends her upstairs. Daniel rates his eggs pretty nice, but kept burning the bread. Chef Ramsay tells him to get a toaster but he is safe because of the eggs.

The 6 cooks who stayed down are brought to the front of the kitchen, their place in the competition is on the line. Christina tells them that being good students means taking the criticism and learn from their mistakes. Chef Ramsay gives them one more chance to do this challenge all over again. They are given only 10 minutes to do it.

Chef Christina tells them to bring their dishes to the front. Chef Ramsay tells Jeff visually it looks silky, he tastes them saying they are rich and creamy and he has nailed it. Chef Aaron tastes Yachecia’s eggs saying it is airy, well seasoned and fluffy and tells her she did an excellent job.
Caitlin’s has improved visually and Chef Christina says the seasoning has improved too. Sam’s eggs are runny and Chef Ramsay says it looks like a grilled cheese, asking if he has to eat it through a straw; Sam admits he has timing issues. Sam said he would give himself a five but Ramsay says he is being generous.

Dino’s dish has improved as well. Chef Aaron says it is creamy, well seasoned and consistent in flavor and the way it was cooked. Heather is the final cook for the elimination challenge. Chef Christina takes a spoonful and before she puts it in her mouth she says there is a lot of pepper; Christina begins to cough after she takes a bite and shows her how grey her dish became because of the pepper.

The chefs discuss the egg dishes, as Christina continues to cough. Chef Aaron says this was about who can adapt and learn and some of them did betters than others. Two home cooks Yachecia and Dino displayed they can take direction well and are told to head upstairs.

Chef Christina calls Caitlin and Jeff to also go upstairs while Sam and Heather are left while Chef Ramsay says at least one of them is going home tonight. He didn’t expect it to come down to this. Sam steps forward and tells him to say good night to Heather and make his way up those stairs.

Heather is told she has a lot of gusto and drive but she wasn’t happy, Christina tells her to leave her apron on her station.