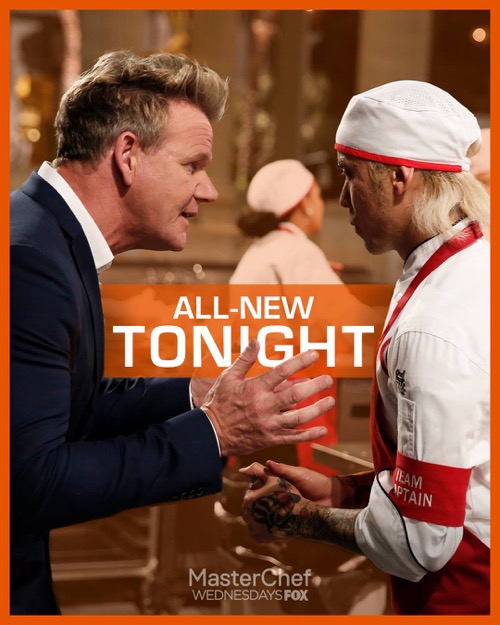 Tonight on FOX Masterchef returns with an all new Wednesday, August 2, Season 8 episode 11 called, “Vegas Deluxe & Oyster Shucks,”  and we’ve got your MasterChef recap down below! On tonight’s MasterChef Season 8 episode 11 as per the FOX synopsis, “The Top 12 head to Las Vegas for a team challenge in which they serve 50 VIPs in entertainment and hospitality at Caesars Palace for its 50th Anniversary party. Each guest will taste both teams’ dishes and then cast a vote for their favorite dish.”

Tonight is the 50th Anniversary of Caesar’s Palace and the Top 12 homecooks travel to Las Vegas where they are greeted by Chef Gordon Ramsay, Chef Aaron Sanchez and Chef Christina Tosi who reveal they will be feeding 50 VIPs in entertainment and hospitality.

Dino and Daniel are the team captains; Dino is given the choice of choosing his whole team first or he could decide which protein each team will have to cook tonight – sea bass or rib cap. Dino takes a gamble and chooses people over protein and Daniel gets to choose the protein; picking sea bass.

Daniel quickly assigns his team to their individual tasks and stations, asking if there is anything they want to add or change while Dino struggles for control with his team as they disagree with pretty much everything he planned for in the dish and Cate is taking over while his ideas are all shut down; he is furious he is wearing the captain band and no one realizes it.

Gordon, Christina and Aaron feel Daniel will be able to rise to the occasion and run his team smoothly while Dino is great individually but not a good team captain or player; wondering if Dino is running the team or the team runs him. When Chef Ramsay asks him about the dish he refers to Cate; he is told he is depending on Dino and is asking him, not Cate.

Its clear Dino has NO clue what is happening or the dish what they are making. Chef Ramsay yells for them to get in sync and get it together. He tells them they are making some stupid mistakes, ordering Dino to speak up, have a meeting and be on the same page. He says he is going with his original plan and if it fails, its on him.

As the VIPs arrive, the blue team is told to pick up the pace. Chef Gordon Ramsay welcomes them and they cheers the first 50 years and hope for another 50; service is called. The red team is serving rib cap with parsnip puree, chanterelles and romanesco with hazelnut crumble.

The blue team is not serving anything because the barley isn’t done; Daniel is disappointed in Yachecia who said she could make it and never said she was having a problem. Daniel walks around it, the table is bare. They are serving a poached sea bass with pickled leeks turnip puree and stuffed squash blossom. Daniel hopes the flavors will be their saving grace and diners won’t miss the component.

Several diners are complaining that their rib cap was too raw. Chef Ramsay finds out that Jason has been cutting off the tips and wasting them, and even though the tips are raw, he still served the middle which would be even more raw and completely under. Dino is embarrassed saying if they are serving out raw steak they are screwed.

Ramsay yells at Dino to talk to Eboni and she shouts to Dino and the others not to touch her damn meat, as she has told them it needs to rest before they serve it. Chef Sanchez tells Newton to stop freaking him out and use spoons, not his big paws. Ramsay praises Eboni saying the meat is cooked beautifully. Some are getting raw fish on their plates and have to vote for the red team.

Dinner service is done and the votes are in; both teams are introduced to the VIPs as one team came out on top. The winner of tonight’s challenge had 68% of the votes and that team is the Red team; meaning the blue team is heading into the dreaded pressure test back in MasterChef kitchen!

Instead of returning to the MasterChef Kitchen, Chef Ramsay tells the blue team that even though there is 6 of them, only 2 of them will go head-to-head in the pressure test and the decision has to be made by Daniel the team captain and he chooses Yachecia and Newton. Everyone feels Daniel should have been in the test and Newton thanks him for throwing him under the bus.

Chef Ramsay welcomes them to the Nobu Villa, they can see that MasterChef has taken over Las Vegas and after this pressure test, one of them will be going back with them while the other will be left right there. Chef Sanchez gives them their black aprons. Chef Tosi says this dish isn’t for the faint-hearted, it is champagne poached oysters. The dish could easily cost $100 in a restaurant and this is Las Vegas on a plate; they are expecting a perfect replication on a dish.

At their stations they have everything they need to make an impeccable dish and have 45 minutes to replicate the decadent oyster dish. Yachecia wishes him good luck and he gives her his best wishes.

Ramsay says they first must get the pasta dough ready, then open and shuck the oysters, get the sauce made and with minutes to go cut everything and put it together. Christina says its going to come down to finesse, timing and confidence but one thing is for sure, one of them is not coming back to MasterChef kitchen.

Both feel its a great challenge as neither had ever made an oyster dish before and each are making huge mistakes as all three Chefs stress over what they are doing, counting down the last minutes and telling them to use gentle hands, feeling its anyone’s game right now. Yachecia is finishing her dish as Newton is unable to open his tin of caviar. Chef Ramsay says it was a quick 45 minutes and tells them they did a good job.

Newton feels he did awful, his sauce is gone and his caviar is missing. She says what is there is plump and rich, the pasta is beautiful, almost to perfection but the reality is the dish is unfinished and the question will be whether the components he has on the dish are good enough for him to stay. Chef Aaron loves the dish too, but the acid from the sauce would have been a welcomed bite to the dish and is sinking the dish.

Chef Ramsay says he has respect for both of them for doing this in 45 minutes. He asks her what is wrong with the dish and says you can see it a mile away, but she hesitates, so he tells her the sauce is way too thin and literally washed off the oysters; the pasta is too thin, explaining the humidity caused the pasta to get clumpy from the extra flour. The oysters are cooked beautifully but the let down is the pasta but it was a very strong effort and he isn’t sure it is good enough to keep her in.

Chef Aaron tries the oyster and says its cooked perfectly, she has the right proportion of caviar to oyster but he can’t find the sauce and the refinement element of the garnishes is missing. Her time management wasn’t good at the end and thinks the oyster has delivered.

After the Chefs deliberate saying it comes down to the oysters and argue about it since the caviar was in a can and not made, so which one did the better job? Chef Ramsay said it came down to the finest of details and the person who executed their oyster dish a touch better is not going to be revealed until next week’s episode.