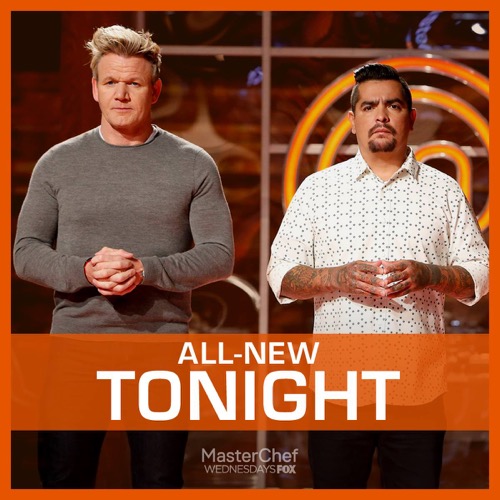 Tonight on FOX Masterchef returns with an all new Wednesday, August 2, Season 8 episode 9 called, “Holy Cannoli,”  and we’ve got your MasterChef recap down below! On tonight’s MasterChef Season 8 episode 9 as per the FOX synopsis, “The kitchen is transformed into a full dining room to welcome purveyors of local ingredients, including butchers, vegetable farmers, beekeepers and herb growers, when the contestants split up for a team challenge using their guests’ products. Later, the losing team must prepare cannoli as part of a pressure test.”

MasterChef Season 8 Episode 9 begins tonight with Chef Christina Tosi, Chef Aaron Sanchez and Chef Gordon Ramsey greeting the top home cooks. Chef Ramsay says tonight things will be different as they will be cooking for a fully booked restaurant in two teams of 7. The Chefs are picking the team captains – 21 year old Adam is the captain of the red team and Caitlin for the blue team.

Adam chooses Brien, Eboni, Newton, Dino, Yachecia, and Jeff while Caitlin chooses Daniel, Cate, Jenny, Gabriel, Reba and Jason. Chef Aaron says they will be filling the restaurant with local ingredient purveyors. They are the backbone of the culinary world and they will be cooking with their ingredients.

Chef Ramsay and Chef Sanchez bring in two big boxes, each team has one box to work with; the contents are identical, the teams take their boxes back to their kitchens and each team has 90 minutes to turn the farm fresh ingredients into MasterChef worthy dishes. The diners will vote after tasting both dishes.

The Chefs talk about the battle of the young guns. Chef Sanchez thinks the red team has it because Adam is a very well seasoned young man, and a very savvy palate and if he can transfer that to a team setting. Chef Ramsay has his money on the blue team because there isn’t a single strong character under Caitlin and she will dominate the team but Chef Christina wants to know who will call Caitlin out when she makes a mistake.

Caitlin didn’t listen to Daniel when he felt she shouldn’t be cooking the halibut with the skin on and when Chef Ramsay hears about it, he tells her keeping the skin on will make it very rubbery and it needs to get crispy and it won’t. He says the elements she wants on the dish including ricotta doesn’t make sense, which many of her teammates agree with but no one speaks up against her. He tells her to stop wasting time on the ricotta and rectify the dish. Most of the team continue to work with the ricotta but Reba says they need to take in what Chef Ramsay said into consideration.

Chef Ramsay tells Christina and Aaron they are cooking the fish with the skin on making it like its wrapped in rubber and then they are concerned thy are making fish and cheese. Its clear not many are following Ramsay’s sage advice.

Adam explains his dish to Chef Christina and she says it has a lot of components and he needs to make sure it is cohesive on the plate. Christina is happy to hear Adam’s voice and louder and more distinct than she has ever heard him; she is worried at how strange the dish sounds. They have pork chop with garlic bok choy, parmesean polenta, blue cheese stuffed dates ; Chef Ramsay says it sounds dreadful.

The diners begin to arrive and Chef Ramsay welcomes them and informs the cooks they have 30 minutes to go and the purveyors are seated. Both teams push to get their dishes together, the red team isn’t too organized as Eboni feels she is not being used and Brien is still cutting the pork for the chops and doing it very clumsily. Chef Ramsay calls him an idiot for cutting off the fat instead of rendering it and Chef Ramsay says the portions are off and would be embarrassing, unwilling to serve raw pork.

With 10 minutes to go, Chef Ramsay is furious that at the rate of plating half the dining room will not get food. Caitlin and Jason are plating with 2 minutes to go and she calls Jenny over to help too. Service is called in and both team captains are happy with their dishes.

The diners enjoy their dish and place their votes. The chefs introduce both teams to the diners as Christina holds the results, and the one team won in a landslide; the winner is the BLUE team! The red team will face the dreaded pressure test right now as the blue team is sent upstairs.

Not all of the red team will face the pressure test, Adam is asked to give them one name and he can save himself. He chooses Brien to be safe but Jeff feels that is a crock, as well as Eboni who is shocked because Brien could have done better at another station. He says he chose Brien because he doesn’t think he can beat Brien. Chef Ramsay says its not up to him and Christina says the one element was the polenta and Yachecia is send upstairs because she did a great job.

Christina produces a box with a treasures Italian snack, the cannoli; Dino celebrates because he is Italian and is sure he can win this hands down. They are told to go back to their stations where they have everything they need to make the cannoli shells and are given ingredients to make it their own.

Jeff is losing his mind when he is running out of time and when he attempts to fill his cannoli he shouts there isn’t enough and throws his hand to his head. Christina isn’t sure he could pull it off, but he returns and attempts to calm himself; with less than a minute left, Brien isn’t even done frying his cannoli. Everyone shouts for them to get them in the box, otherwise they don’t count.

Adam’s box is opened and Christina says visually it looks sloppy. The shell is beautifully fried, but the ginger looks like the cannoli is infested with worms and if she swallows that she is choking on it and honestly tells him she doesn’t know if that will keep him in.

Aaron comes to Dino’s box, and comments on how calm he is, saying it felt like his mother was there behind him. He says it looks like his Italian grandmother made it. Aaron takes a bite and loves the blood orange, then eats the chocolate hazelnut cannoli too and says this is how to keep honor to his ancestry.

Eboni’s box is opened by Chef Ramsay and they look incredible. When he takes a bite he says they are delicious and is impressed with her making them for the first time and made a near perfect cannoli.

Christina comes to Brien’s box and when she opens it she asks him how his math is, and he admits he only made 4 instead of 6. She says of course it is better to have 4 elegant cannolis than 6 sloppy ones but none of them are good quality; the filling is too loose and looks like vomit. She says there is nothing wrong with the peanut butter filling but it doesn’t belong in a cannoli and she isn’t impressed.

Chef Aaron comes to Jeff’s box and feels his wasn’t 100% and promises his box will be unique and he asks if this is the ending of Jeff’s time? There is only 5 cannolis and when he tastes it he says it tastes like bacon left on a griddle too long and then stuffed into a cannoli. He says Adam is in trouble but him and Brien have trouble with their math and he is in the same boat.

Chef Ramsay goes to sees Newton’s box, who jokes that he can count to 6. He says they look right, when Ramsay cuts it open he says it is beautiful, think and crisp on the outside. Newton tastes it and says it tastes good. Ramsay says this is him in a dessert, and there is so much potential and did a good job.

The judges deliberate and Christina says it was a very hard pressure test and some cooks impressed them – Dino and Eboni, who are jumping to the front of the group. Newton is also told he did a great job and all 3 go to the balcony.

Adam, Brien and Jeff are told the competition is turning a corner – the stronger are getting stronger while the weaker are becoming more obvious. Jeff and Adam step forward and are told they both should have done much better; they are told to untie their aprons and head upstairs. Brien is told he just didn’t come close to staying tonight and is told to take his apron off and head home.