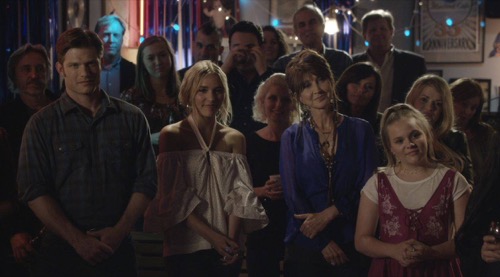 Tonight on CMT Nashville starring Hayden Panettiere returns with an all new Thursday, August 3, 2017, season 5 episode 22  finale called, “Reasons to Quit and we have your weekly Nashville recap below for you. On tonight’s Nashville episode, as per the CMT synopsis, “Season 5 ends with Deacon and the artists of Highway 65 taking a stand and Zach sending a message. Meanwhile, Maddie and Juliette’s conflict comes to a head; Daphne attends a pool party; and Gunnar returns from Avery’s tour..”

Brad and Deacon meet. He tells Deacon now that Zach has jumped ship he would be willing to buy the label. Deacon isn’t interested in selling. On his way out, Deacon runs into Jessie who is dropping off her and Brad’s son. Her son doesn’t want to go. Deacon witnesses the whole thing.

Avery calls Juliette who is angry. Her and Maddie still aren’t talking. Her AC is broken and she is hot. On top of that she has a pre-show party tonight. As she rants and raves to Avery, his female bandmate licks an ice cream cone erotically, grabbing his attention on purpose.

A secretary at Highway 65 calls Deacon. The power has been shut off per the order of Zach Welles. Deacon gets to the label and discovers that Zach has withdrawn all the money from the accounts. It will take 3 days to resume power.

Daphne is trying to pick out and outfit. She needs Maddie’s help who is busy getting ready. Deacon calls home He calls the entire office, telling them to report to Tracks Studio. The girls show up. Deacon tells them that Zach is just flexing his muscles.Will

Will shows up. He can’t find Zach, he and Gunnar have been looking. Scarlett shows up. She didn’t know Gunnar was back in town.

Juliette calls Deacon. She isn’t coming in until later. They all hang out and sing. Jessie shows up with milkshakes and burgers. Maddie and Daphne sit outside eating, talking about what their dad will do now. Gunnar calls to say he found Zach. Deacon leaves to meet him. Zach tells Deacon he has been pushed too far. He isn’t going to help until they all beg him too. Deacon calls him small before walking off. Deacon isn’t giving in.

Juliette shows up at the pre-show party. She is feeling uncomfortable. Glen gives her a pep talk. Juliette waves to Maddie who ignores her. Maddie walks off, leaving Deacon and Daphne behind. Deacon wants to know what is going on.

Daphne finally tells him. Deacon finds Juliette and confronts her. He tells her she can’t make it right. She is off the label when they get it back up and running.

Brad meets with Zach and Alyssa. Brad wants the end of Highway 65 to benefit the both of them. Brad wants to own it all, the songs, the artists, the network.

Deacon watches Scarlett and Will sing. Gunnar shows up. He and Scarlett say hi uncomfortably. Gunnar asks her to go for a walk. He is ready to talk. Really talk.

Avery calls. Juliette is upset. She is resting on the couch, wallowing. She wants him to come home. She is crying. Avery tells her about the fate of Highway 65. He asks her if she has spoken to Deacon. She needs to make sure she relays to Deacon that her and Avery are supportive of him. Juliette gets an idea.

She lets him go while reading an article about Scarlett written by Mackenzie Rhodes.

Avery’s female bandmate asks him if he is okay. He tells her he is fine. She doesn’t believe him. She knows the Juliettes of this world and she is bound to leave a path of destruction. Avery asks her why she cares. She doesn’t give a response, just gets up and leaves.

Daphne is at her party. She runs into Jake, Jessie’s son. They talk a little bit. Meanwhile, Scarlett is laying on the couch. Gunnar is telling her how he ran into an old friend in Texas and did some soul searching. She tells him that one day she hopes he can soul search on his own.

Jessie picks up Jake and Daphne at their party. Jessie asks how it went and explains to Daphne that Deacon is busy so she thought it would be best if she picks her up and gives her a ride.

Zach and Will are talking about Highway 65. Zach assures Will that he won’t get left behind because of this mess. Will explains that Deacon and the rest of them are his friends. He isn’t going to leave them behind. He walks to the door and tells Zach not to call him.

The gang gets together at the Blue Bird. Outside, Alyssa is smoking when Deacon approaches her. He asks where Zach is. She tells him she doesn’t know where he is. She tells him she wishes that he could understand that artistic integrity comes with a price. She leans forward and kisses him. He pushes her away.

What was that for? She explains that he is a sad man who has been to hell and back. He looked like he needed it. She senses pain in people. He wishes her the best and leaves quickly confused by her behavior.

Gunnar approaches Scarlett out back at the cafe. He knows he has faults, but she does too. He is sick of trying. They get called to the stage. Gunnar selects a fitting song to sing with her that makes her cry half way through the song. She keeps going while Deacon, Daphne and Will cringe in the audience.

Zach gets a call from Mackenzie Rhodes. She is writing a story about him and wants to confirm some facts. He gets angry. She taunts him with the knowledge of what he is doing to Deacon and the others. He gets angry and threatens her. If she publishes a story like that he will sue her. She laughs and hangs up. She is with Juliette, who tells her she doesn’t need to publish this story. She will have one better for her.

Avery gets a knock on his hotel room door. It’s his bandmate with apology sandwiches. In the backdrop, ET is on with a story about Juliette dropping out of the awards show, admitting to stealing Maddie’s song and withdrawing her nomination. Avery immediately starts packing while his bandmate scols him again for running to save Juliette from herself. He doesn’t care. He is going home.

Daphne is looking for her cell phone. Deacon tries to help her. She hopes she didn’t leave it at her stupid party. He asks her why it was stupid. She asks him why Jessie picked her up. It was just a favor. Daphne asks if Jessie will be around more.

Deacon meets Jessie, who has Daphne’s phone. They talk about his upcoming trip to LA with Maddie. They hug goodbye for a longtime, close to sharing a kiss, but pull back away from one another and say bye.

Deacon stops by the label. Zach is there, angry and crying. He can’t believe that Deacon would call Mackenzie. Deacon sits down with him. He explains to him that he liked having a family and he should stop fighting it. He sees Zach’s loneliness. He has enough money. He needs to enjoy life.

Scarlett pays Juliette a visit. She knows what Juliette did. Mackenzie called her. Scarlett forgives her and she thinks the others have too. Juliette doesn’t think it is going to be all right. She has a darkness in her that just won’t go away.

Juliette watches Maddie perform at the music awards while she sits on her couch. Meanwhile, Scarlett gives her key back to Gunnar while the two say goodbye.

He tells her to keep it for an emergency.