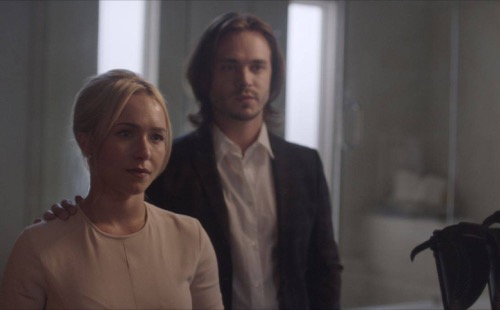 Tonight on CMT Nashville starring Hayden Panettiere returns with an all new Thursday, February 16, 2017, season 5 episode 8 called, “Stand Beside Me.” and we have your weekly Nashville recap below for you. On tonight’s Nashville episode, as per the CMT synopsis, “Rayna (Connie Britton) and Deacon (Charles Esten)  take precautions as Hockney tests the limits of the restraining order; Juliette (Hayden Panettiere) asks the church choir to work with her on an album; Scarlett finds herself drawn to Damien.”

Tonight’s episode of Nashville kicks off with Deacon and Rayna having breakfast with the girls. Maddie is not a happy camper when she realizes the security guards are back, her parents explain that they had to tighten security because Rayna’s stalker got out of jail. They have a restraining order and he has to stay 300 ft. away, but there are no guarantees.

Juliette spends the morning at bible study with her new friend Haley. Afterwards, Juliette informs Haley that she is doing a gospel album, and she wants Haley and the choir to record with. Haley isn’t thrilled – she thinks that it is a bad idea. Haley reluctantly agrees to let Juliette meet with the choir.

Scarlett meets up with Damien at a diner, he called her and said he had to see her urgently. Damien says that something happened between them, and he wants to explore it. Scarlett agrees to have lunch with him and get to know him a little more.

Later that night, Rayna’s stalker shows up outside of Rayna’s house. They can see him on the security camera, but there is nothing the police can do because he is technically 317 feet away from the house and isn’t breaking the law. Deacon is fuming, he wants to confront Hockney, but the police won’t let him.

The stalker situation is taking a toll on Rayna and her family. Rayna has a ton of work to do, and has barely been sleeping. The next day she tries to get Daphne up for school, but Daphne says her stomach hurts and she doesn’t want to go to school. Rayna convinces her to go to school, but Daphne excuses herself from class to use the bathroom. She frantically calls Maddie at work and tells her that she has her period. Daphne begs Maddie to bring her come clean clothes to school.

Deacon shows up at Scarlett’s house, frazzled. He rants to her about Rayna’s stalker and being trapped in her own house. Scarlett has news too, she explains what has been happening between her and Damien and seeks advice.

When Deacon gets home, he walks in on a screaming match between Daphne and Maddie. Apparently, Daphne is furious that Maddie called Rayna and sent her to the school instead of coming herself. Maddie shouts at her parents that they need to talk to Daphne and storms out of the house. Haley arranges a meeting between Juliette and the choir. Juliette explains that she is working on a gospel album and gospel album and she wants them to record with her. Some of the women in the choir are not thrilled about the idea, they imply that Juliette has been going to church for three months and she doesn’t know anything about gospel, or their religion.

Haley arranges a meeting between Juliette and the choir. Juliette explains that she is working on a gospel album and gospel album and she wants them to record with her. Some of the women in the choir are not thrilled about the idea, they imply that Juliette has been going to church for three months and she doesn’t know anything about gospel, or their religion.

Scarlett sits down with Gunnar to have a chat with him about Damien. She informs Gunnar that she doesn’t want to be in a relationship right now, not with him or Damien. Scarlett needs some time to sort out her feelings. Gunnar accusing Scarlett of dumping him just so that she can get a free pass to sleep with Damien. Scarlett tells Gunnar the hard truth, so much has happened between them that she is numb, and she’s not even sure she still has feelings for him.

Juliette stop by the studio to hear Avery laying down his new track. Later that night he asks what she thought. They wind up arguing because Juliette thinks that Avery’s song was a little juvenile, and he’s outgrown his “angry kid” songs.

Rayna surprises Daphne with a gift, to celebrate her getting her first period. It seems like Daphne may have been on to something by trying to hide her period from her mom, because Rayna is making a big deal about it.

Juliette heads back to the church to meet with the choir, she apologizes for offending the and gives a powerful speech about what their music has done for her since the crash. Juliette finally appeals to them, and they agree to do the album with her.

Maddie slips out and goes to Clay’s show at a local bar after Rayna told her not to, it’s too crazy with the stalker out running around. Rayna stops by the club to make sure that Maddie is okay and the security guards are with her, and she’s pleasantly surprised by Clay’s singing. After the show, Rayna invites him to stop by her office to talk about his career.

Rayna heads to the office to get some work done late at night, the security guards wait for her outside. Rayna is listening to music and suddenly her stalker barges in to her office and locks the door behind him. Rayna tries to stay calm, he reveals that his name is Wayne, and he just wants to talk.

Wayne seems a little frantic, and scatter-brained. He rants that he has been trying to talk to her for weeks and that they are connected, Wayne thinks that Rayna understands her better than anyone else and her music has changed his life. Things are going south fast, apparently, he was beaten by his father and grew up in an alcoholic home.

Rayna gives Wayne a pep-talk about growing up with a socio-path, she manages to call 911 on her cellphone while he’ distracted. Rayna tries to make a run for it, and Wayne chases after her with a knife. The police finally arrive, and just when it looks like Wayne is about to slit her throat, he drops the knife and is arrested. The police rush a frantic and delirious Rayna to a cop car to take her home.

Rayna calls Deacon sobbing from the back of the cop car, and tries to explain what happened. The cop car flies through an intersection and another car smashes right in to the passenger side.