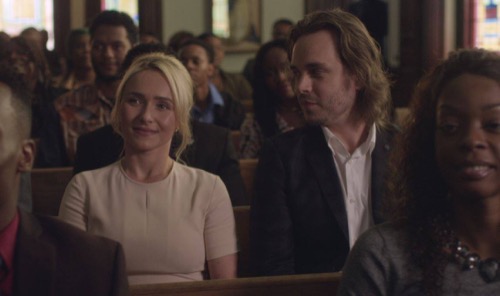 Tonight on CMT Nashville starring Hayden Panettiere returns with an all new Thursday, February 9, 2017, season 5 episode 7 called, “Hurricane.” and we have your weekly Nashville recap below for you. On tonight’s Nashville episode, as per the CMT synopsis, “Rayna (Connie Britton) and Deacon (Charles Esten) struggle to write their album; Maddie (Lennon Stella) and Daphne (Maisy Stella) create a disturbance at home; Damien apologies to Scarlett; (Clare Bowen)  Scarlett and Gunnar (Sam Palladio) question their relationship.”

While Rayna and Deacon are teasing each other about their first kiss, there’s a knock on the door. A man named Gene enters their house with camera equipment and announces that Zach sent him to record some footage of them writing their album together. Deacon obviously isn’t too thrilled about it.

Scarlett and Gunnar are grabbing a bite to eat at the diner, their music video just when live and already has over a million hits. While they are basking in their new found success, their phones start ringing off the hook, everyone wants an interview with The Exes.

Rayna sends Gene to shoot in the kitchen so that she and Deacon can talk. Rayna calls Zach and tells him that filming with Gene is not going to work. She’s not making a reality TV show, she is trying to write an album. Zach convinces her to give it a shot and promises that she will have final approval.

Maddie is at Clay’s house listening to music with him. Clay wants to take Maddie home because it is getting late, but Maddie wants to spend the night at his place.

At home, Rayna is tossing and turning in bed. She wakes Deacon up because she is worried aboutMaddie and Clay, she can’t get over their age difference. Rayna obviously isn’t tired, and she’s been up all night worrying. But, Deacon isn’t too upset about it and goes back to sleep.Scarlett and Gunnar kick off their interviews with the Today Show, the director of the video tags along. After their interview, Gunnar is a little upset about how buddy buddy Scarlett and the director were on live television.

At their house, Rayna and Deacon are trying to write, with Gene breathing down their necks. Drudging up their past seems to be taking a toll on Rayna, while they work on their lyrics about the past, Rayna keeps having flashbacks of herself and Deacon fighting years ago.

Scarlett heads out to dinner with the director of the video, Gunnar says that he can’t make it. Damien apologizes to Scarlett for being so hard on her while they were filming. They order a few drinks and Scarlett opens up to Damien and tells him about her childhood and where she came from. They flirt shamelessly with each other.

Deacon can tell that Rayna is getting frustrated, and having Gene breathing down their necks doesn’t help. Deacon decides to take Rayna on a spontaneous date, and they run out of the house and head to the bowling alley.

Back at home, Maddie and Daphne are baking a cake in the kitchen. Clay shows up, and Maddie takes him up to her room, she tells Daphne to take the cake out of the oven when its done.

Deacon and Rayna are having a great night, and then they get a call from their security – there’s a fire alarm going off at their house. Deacon and Rayna rush home and there are fire trucks in front of their house. The firefighters reassure them that everything is fine, it was just smoke.

Deacon and Rayna aren’t thrilled when they find Clay in the kitchen. Clay rushes out of the house while Rayna proceeds to go up one side of Maddie and down the other. She’s furious that Maddie had Clay in the house with her little sister, and they obviously weren’t watching her because they nearly burnt the house down.

Scarlett stops by the office the next day to chat with Rayna, on her way out she bumps in to Damien. She thanks him for the work he did and shakes his hand. Damien is leaving town, before he goes, he tells Scarlett to stay open – he knows great things will happen to her. They share a hug and then Damien kisses her.

Rayna specifically said that she didn’t want the kids taped, but Gene is at her house taping Daphne. Daphne feels uncomfortable when Gene starts asking her how often her parents fight.

Rayna and Deacon are getting discouraged because they both seem to have writers block – this album is not turning out to be how Rayna pictured. Deacon thinks that they should spend some time writing apart to see how it goes. Rayna gets upset and thinks that he is quitting the album.

They argue and Rayna breaks down in tears, she is scared they are going to lose each other while trying to make their album.

The next day at the breakfast table, things are tense. Daphne makes jokes about her parents not speaking to each other, and Gene tries to capture it all on tape.

Scarlett sits Gunnar down and confesses to him that she was having feelings for Damien, she reassures him that he has nothing to worry about now because Damien is gone. Gunnar obviously isn’t too happy, and storms out.

Maddie heads in to Daphne’s room to talk to her about Clay coming over, she wants to make sure that she’s not confused about her having a boy over. Daphne feels for Maddie, she can tell that being in love hurts, it seems to make everyone crazy.

Deacon is up late alone in the livingroom, strumming on his guitar. Rayna is obviously miserable since they got in her fight, but she can’t drum up the courage to join him. It looks like Deacon is spending the night on the couch. In the morning, Rayna joins him on the couch and they make amends. It turns out, while they were sleeping in separate bedrooms, they both were able to finally write a song. They sit down with the guitar and begin cranking out music like its nothing.

Scarlett and Gunnar head out for lunch, he’s still angry about her Damien confession. On the way in to the restaurant, some girls stop Scarlett for her autograph, but they don’t even recognize Gunnar. They head inside and get a table, and they begin arguing all over again.

Scarlett and Gunnar head home and make up and head to bed together, meanwhile Damien blows up Scarlett’s phone with text messages. It turns out that he never left town and he wants to see her again.

Deacon and Rayna head to the studio to lay down their new song, it sounds like they hit the nail on the head.