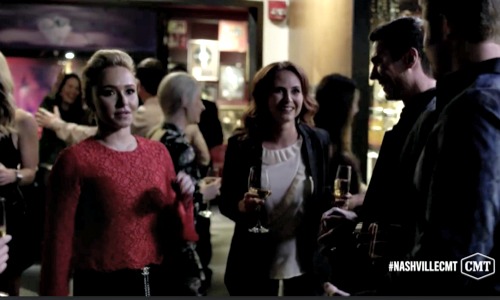 Tonight on CMT Nashville starring Hayden Panettiere returns with an all new Thursday, July 20, 2017, season 5 episode 19 called, “You Can’t Lose Me” and we have your weekly Nashville recap below for you. On tonight’s Nashville episode, as per the CMT synopsis, “Juliette takes great pains to keep Maddie from learning the truth; Deacon considers a new artist for Highway 65; Scarlett’s pregnancy faces complications; Gunnar searches for the mugger.”

It’s morning. Scarlett wakes up from a nightmare in her bed. She goes to see Gunnar in the living room. She thanks him for spending the night. He tells her the police called. They have a suspect. They decide that Gunnar will go to id the man.

Daphne is headed off to school. Deacon teases her about Flynn, her new boyfriend. She tells him that he isn’t her boyfriend. At the studio, Zach is holding a meeting with Juliette. He invites Maddie to stop in. Zach has an idea. He wants Maddie to drop in and sing at one of Juliette’s gigs tonight. Juliette isn’t happy, but hides it. She realizes that Maddie will meet Travis, the songwriter, who passed along a song to Maddie that Juliette stole.

Deacon calls Jessie to tell her he has received a call about her from a manager. Meanwhile, Gunnar is at the station. They didn’t get the right guy. He is angry.

At home, Scarlett is laying on her bed. She is in pain. She looks down after sitting up and sees blood between her legs on her bed. She calls Deacon. He arrives to find her trying to clean up in the bathroom. She is visibly shaken and scared. He picks her up and carries her out the front door and to the hospital.

At the hospital, Scarlett leans on Deacon in the waiting room. She doesn’t want him to call Gunnar yet. Juliette comes home to see flowers from Travis. She calls him to say thanks and offer him an invitation to another event on the same

Scarlett is in the bed getting examined. Her baby’s heart has stopped beating. She cries, saying no over and over. Deacon consoles her. Deacon leaves to meet Gunnar outside. He tells him to be strong. Gunnar goes in. He rushes to Scarlett’s side. The doctor comes in. They inform her about the robbery and Scarlett falling. She tells them that the robbery is most likely not the cause, but a chromosome defect. She begins having back pain. She doesn’t want Gunnar or Deacon in the room. She needs to do it alone.

Scarlett and Gunnar come home together. Gunnar cleans her bed and offers to get her anything she might need. She thanks him and tells him she needs to be alone. She leans up against the wall before sliding down and crying.

Maddie is on stage. She welcomes Juliette to the stage. They sing together to a happy crowd. Gunnar is drinking at home. Will tries to comfort him, but isn’t aware that Scarlett lost the baby. Gunnar is angry that he stood there scared and didn’t defend Scarlett.

Gunnar wakes from a nightmare in his bed. Scarlett is at home looking at social media. Scarlett hears someone at the door. It’s Jessie Caine. She is trying to slip away. She left a gift at the door. Scarlett stops her. Jessie explains that Deacon made a mistake and slipped up and told her. She knows how it feels. It has happened to her twice.

Juliette is looking through clothes in her house. Maddie stops by. Maddie thanks her. Juliette tells her that they needs to talk soon. Gunnar is outside of the store where they were robbed. He is searching for the guy who robbed them.

Jessie and Scarlett is sitting on the couch talking about forgiveness and feeling like failures. Scarlett begins to cry. She only has a blanket left, the blanket they wrapped her baby in before they took her away. Deacon arrives to find them laughing.

Gunnar sees the kid that robbed them on the street. He gets out of his car and chases after him. He yells at him before punching him repeatedly. He lets him run away.

Deacon and Jessie leave Scarlett’s. He is angry that Jessie just showed up. She tries to explain. He is afraid Scarlett could be mad at him. Jessie tells him that it has happened to her. He pauses and then apologizes.

Travis and Maddie arrive at the party at the same time. Juliette keeps them apart. She tells Maddie that she looks sick. Maddie gets nervous and heads home. Outside she sees Travis. He shares that he was surprised she passed on the song. Maddie goes back in to the party. She confront Juliette, who tries to get her to be quiet. Maddie doesn’t care. She throws a drink in her face in front of everyone before calling her a liar and leaving.

Scarlett shows up at Gunnar’s. She tells him that he doesn’t need to take care of her. She needs to break up with him because he is never happy. She is afraid to disappoint him. She can barely carry herself now let alone him.

Gunnar is sitting in his bed, depressed. Avery calls him to ask how he is. He invites Gunnar to Texas. It will make him feel better. He heads over to Scarlett’s to get some of his stuff. He tells her he is going to Texas. She stops him in his tracks and hugs him.

Juliette shows up at Maddie’s. Daphne answers the door. Juliette asks for Maddie, but Daphne tells her that she is not available. Juliette asks her to relay a message – she knows what she did and knew it was wrong but she didn’t anyways. She is sorry. Deacon tries to talk to Maddie about it, but she wants to deal with it on her own.

Deacon sees Jessie at Scarlett’s party. She makes a joke that she was invited. He apologizes to her once again and she accepts but explains that she will not be signing with the studio. She needs to keep boundaries. He agrees. He introduces her to the girls.

Scarlett takes the stage and announces her goal to bring light to issues like STDs, unplanned pregnancy and miscarriages. She announces her miscarriage before singing. Deacon and the girls watch with tear filled eyes.