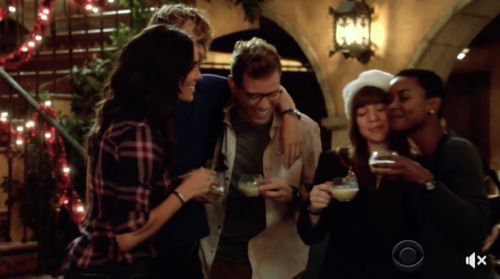 Tonight on CBS NCIS: Los Angeles returns with an all-new Sunday, December 17, 2017, season 9 episode 11 Fall Finale called, “All Is Bright” and we have your weekly NCIS: Los Angeles recap below. On tonight’s NCIS Los Angeles episode, as per the CBS synopsis, “The team investigates a ransomware attack that takes out the entire power grid for west L.A. and paralyzes the city. Also, as the first holiday season since the death of Sam’s wife nears, he struggles to find the best way for his family to celebrate.”

Hidoko had had to break some bad news to Eric and Nell on tonight’s all-new episode of “NCIS: Los Angeles” when she saw them putting up Christmas decorations at the office and new it wouldn’t go down well with Mosley.

Mosley didn’t like Christmas decorations and she wasn’t overly fond of the season in general. But Eric and Nell thought they would be able to change Mosley’s mind and so they tried plugging in their tree because “no one could hate a lit up tree”, but unfortunately the duo’s timing was off. They plugged in their tree the same time the whole city suffered a blackout. So they thought they had short-circuited the system at work and had actually gone into hiding because they hadn’t wanted to get into trouble,

But Hidoko found them in the storage room and she told them that they were in the clear. The whole city had lost power at the same time and so Mosley didn’t know about the tree incident though she still needed them in the ops room. Mosley had wanted to know what happened to make the whole city shut down and so she called in everyone. Sam had no problem with getting to work because he could swim there meanwhile everyone else had suffered setbacks in getting to work. Deeks and Kensi got stuck in traffic and Callen had been forced to check on Finn.

Finn was the young kid that Callen had sort of taken in as a protégé, however, Finn hadn’t been at his apartment. He had actually rented the room out on Airbnb without telling Callen and was out in the world doing god knows what. But back at the office, the team had found out that the blackout hadn’t been an accident. Someone had deliberately shut down the power grid and was holding it for ransom unless they were paid twenty million dollars. So Eric and Sam went down to the grid to check on things from there and Eric had quickly learned it had been an inside job.

Someone from inside the power company had been responsible for the malware and so they asked the boss if there was anyone at the office knew Russian. The Russian alphabet had been used to put in the code used for the malware and it hadn’t been used like a pro meaning whoever was behind it hadn’t known Russian all that well. But there was one person that matched the description. His name was Edgar Parsons and his boss figured he picked up some of the Russian languages what with all the video games he played.

So the team sent two of their own to Edgar’s home. Kensi and Deeks had finally gotten out of traffic by then and had no problem with searching for Edgar as long as they got to motorcycle. But finding Edgar and getting answers from him hadn’t been that bad. The guy had felt sorry for what he did and had told them that he only did it for the money. Not the twenty million he had told everyone he wanted in exchange for clearing up the ransomware, but the thousands of dollars he had gotten paid to shut down the power grid and so the couple realized there was something bigger at play.

There weren’t a lot of reasons for why someone would shut down the power grid however the motive was the same. Someone had been plotting to do something when the power was out and so the team looked for the mysterious woman that Edgar told them about. She had apparently met with him right in front of work and so it wasn’t that hard to track her. But the woman they were looking for proved to be a familiar face. She was a Fuentes of the notorious Fuentes family that used to run the Morello cartel. So Sam who had some dealings with them had questioned if their suspect wanted to rebuild the cartel.

The cartel used to be run by Jose Fuentes and Jose was locked up. But Jose had recently been transferred to a prison three miles away and so Sam decided to check it out with his newly return partner, Callen. The guys had gone to the prison and they had been told the blackout hadn’t affected them. The warden said their backup generator had kicked in three minutes after the blackout and that the only problems they had with the TV. The TV was still out and the prisoners were all getting upset about missing out on their soap operas. So the guys had thought everything was fine.

They just wanted to check on Jose before they left and so they had gone to see him. But the man in Jose’s cell hadn’t been Jose. It had been a maintenance worker that the Fuentes had information on and so they had coerced him into taking Jose’s place while the real Jose was broken out of prison. So Kensi and Deeks managed to track down the sister and they talked to her about how she broke her brother out of jail though she hadn’t done it for the reason they suspected. They thought she did it so that her brother could take over the business when in fact she did because she along with her brother had grown up without their father and they hadn’t wanted that for Roberto.

Roberto was Jose’s son and he was born five months after Jose went to prison. But the team track down Jose at the welcome back party that his sister eventually told him about. So they were able to arrest Jose again and, while they were at it, they allowed him thirty minutes with his son so that Roberto wouldn’t remember his father getting arrested so close to Christmas. And while what he had seen had been heartbreaking, Callen felt that he should try to reach out to Finn and stop Finn from doing whatever he was doing.

But all Finn had been doing was letting out the apartment to get enough cash to buy the other kids at the shelter some Christmas gifts. So Callen learned to let that one go!