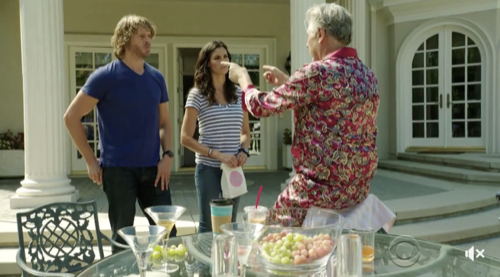 Tonight on CBS NCIS: Los Angeles returns with an all-new Sunday, October 29, 2017, season 9 episode 5 called, “Mountebank” and we have your weekly NCIS: Los Angeles recap below. On tonight’s NCIS Los Angeles episode, as per the CBS synopsis, “Sam goes undercover as a day trader after a prominent investment banker with ties to a Russian oligarch is murdered. Meanwhile, one of Callen’s aliases is the victim of credit card theft, and Mosley is concerned it signals something bigger.”

An unfortunate accident proved too good to be true on tonight’s episode of “NCIS: LA” after NCIS found out the victim was Phillip Nelson.

Nelson was part of the Naval Reserve and his calls had been monitored for several years because he was a known contact of Abram Sokolov who was a known gun as well as a drug runner. But the authorities hadn’t been able to find Sokolov on their own and so they had been sitting on Nelson until finally, they got what they wanted. Sokolov had called Nelson and the two had used code words like Mountebank and they had argued over it what Sokolov supposedly wanting to start over there and Nelson telling him he shouldn’t.

But Sokolov had eventually hung up on his good friend because he said he’ll do what he wants and so it didn’t seem like a coincidence that Nelson was murdered moments after telling Sokolov no. Not many people would tell someone that dangerous “no” and therefore NCIS had a good reason to believe Sokolov had killed off Nelson before the other man could interrupt his plans. So they had tried to figure out what Mountebank really stood for and was going to infiltrate Nelson’s office at the bank when Mosley pulled rank.

Mosley said Callen couldn’t go in undercover on this one. She had recently found out that one of Callen’s aliases had gotten their identity stolen and she wasn’t the only one that thought it may have something to do with the case. Both Mosley and Sam knew that the alias, Dexter Hughes, moved in the same circles as Nelson and so suspected the identity had been stolen to keep Callen away from this case. But Callen hadn’t liked being benched or that Mosley found out about his stolen identity. So he decided to look into himself.

Callen had gotten some help from Nell and she told him that someone had used Dexter Hughes to rent an apartment in Santa Monica. But while Callen did that, Sam had gotten a job at the same bank where Nelson formerly worked and he had managed to impress everyone with his tech-savvy friends backing him up. So Sam waited everyone out and had then snuck into Nelson’s computer to find out what he was working on and what it had to do with some information they found because the information had been terrifying.

The team found out the bank was moving a lot of stock and it seemed like it was preparing for the market to crash. But it takes a lot for that to happen and so that made the team believe in the worse. They assumed the bank was preparing for a terrorist attack that could sink the US Dollar and so they had to find out where it was in order to stop before it was too late. So Sam made sure he got close to the boss and that proved to be a profitable relationship. He was later told that he would be accompanying her to Nicaragua and that he was supposed to act as her second on a deal.

But Deeks and Kensi had also gotten some info. They had gone to Arkady’s place to find out where they could run into acquaintances of Sokolov and had gotten dragged to an underground gambling ring. The place had apparently known Arkady well and so he used that to get his friends inside. Which is how they met Sokolov’s sister! She told them how she never liked her brother, but she had only agreed to talk to them once Deeks beat her several times at poker and was holding onto her jewelry for leverage. So the sister eventually told about Nelson.

Nelson had agreed to work for Sokolov because Sokolov had gotten dirt on him. But the sister also knew that Sokolov hadn’t cut ties with the bank because he also had dirt on Nelson’s boss Leigha Winters and so the guys later brought Leigha to the boat shed. They had had dirt on her and could prove she willingly took part in money laundering for Sokolov. So they left the questioning up to Callen. Callen had gotten back on the case after he found out a kid had stolen his identity and that the kid had nothing to do with Sokolov.

So Callen grilled Leigha until she broke. She admitted that she was working for Sokolov and that she hadn’t known who he was until a week ago. But Leigha had only agreed to do it because Sokolov had something on her and so she was willing to help them. She told them that Sokolov had gotten the bank to move so money because he was going to send it to the Ukraine yet arming the Ukraine with American money for a war they couldn’t win was only going to bring further conflict between the US and Russia. And so Sokolov hadn’t been planning a terrorist attack, he was planning a war.

Sokolov probably hoped to use the conflict to profit and he didn’t care about everyone such a war would affect. But the team did. They found Sokolov was in the city and had Leigha continue on to the meeting though they had planned something beforehand. They had gotten Leigha to go in wanting to be friends with Sokolov and had shot at them to get them to flee without the money as well as build up Sokolov’s trust in Leigha. So Sokolov had thought he escaped imprisonment thanks to his new friend and he hadn’t realized that he had gotten bugged.

NCIS had wanted to track Sokolov to see where he was heading and who he was dealing with. But they had made sure to stop him from fleeing with the money because that kept him from interfering in the Ukraine. So they won at what they were supposed to do and Callen had managed to make a friend out of it. He had ended up bonding with the kid that stole his identity because the kid had reminded himself at that age and how he needed someone to take a chance on him.