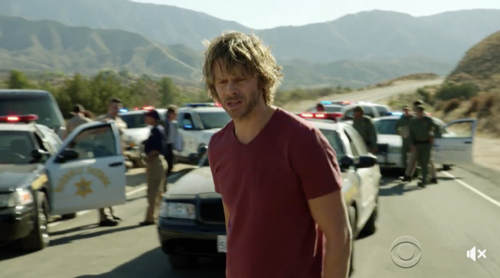 Tonight on CBS NCIS: Los Angeles returns with an all-new Sunday, November 19, 2017, season 9 episode 8 called, “This Is What We Do” and we have your weekly NCIS: Los Angeles recap below. On tonight’s NCIS Los Angeles episode, as per the CBS synopsis, “The NCIS team must locate a group of unknown assailants who illegally crossed the border and attacked California Highway Patrol officers. Also, Homeland Security sends over Specialist Sydney Jones, Nell’s older and bossy sister, to assist NCIS.”

There was an incident! Border Patrol had stopped a suspicious truck on the road and had found a group of illegal immigrants hiding out in the back however that hadn’t been the incident. That had been the beginning. It wasn’t long after the truck had gotten pulled over that several shooters arrived on the scene and killed everyone they saw whether they were illegal or not. But the team did start out with a lead on this one. They had found a young boy hiding not far away and he appeared to be the only survivor of the shooting. So Kensi had tried to get the boy to open and tell them what he saw however he wouldn’t even look at her much less talk to her.

The kid pretended like Kensi wasn’t in the room with him. But Kensi thought he would be more open or at least tell them his name if he had something to eat and therefore sent out Deeks to get the food, but Deeks picked up junk food. He picked hamburgers with fries and soda and Kensi got snitty with him because that didn’t sound like a notorious meal. So the couple had given their guest some privacy while they discussed what was best for him and that had given EAD Mosley her chance. She went into the room with a video game and had gotten everything she could out of the kid. Which wasn’t much!

He had been traveling with his mother when they got pulled over and he hadn’t recognized the shooters. But he did say they weren’t Mexican because they hadn’t been speaking in either Spanish or English. So that got everyone thinking and they suspected that the shooters were sent after someone sneaking over and had tried to catch them before anyone else could learn that they were there though the team hadn’t known how close they were with their theory until they met Nell’s sister. Her sister was a fed as well and she knew who they were unknowingly tracking. She said they were part of the group Tahir-al-Sham and the group was looking for Ahmed Han Asakeem.

Asakeem had cut a deal for himself and was back in the city. But the team went looking for Asakeem and had sort of broken him out of custody in order to get him for themselves. So they took him to the boathouse and questioned him about shooters however he claimed not to know a thing about them because he wasn’t involved in those type of things. Asakeem still believes he was a patriot and so he wouldn’t understand why several men from Tahir-al-Sham were killed after trying to cross the border. He said that refugees were coming in more by the day and he had been trying to help his country when he had gotten taken in.

But that had upset Kensi. She had been listening on the conversation and had wanted the chance to confront Asakeem for being a traitor, but he doesn’t count himself as one because he said he had remained loyal to the country of his birth. So Asakeem kept coming up with excuses for why he was a good guy and that had frustrated the person he had tried to kill. Kensi continued to believe that Asakeem was hiding something and so she tried to stay on him while Eric worked with Nell’s sister behind Nell’s back. She doesn’t like Sydney and believed Sydney bullied her for most of her life. And she avoiding her sister gave Eric no other choice than to work with Sydney.

Sydney was just as whip-smart and together they found out who had put the hit on Asakeem. But to get Kasami, they had to lay a trap. They dangled something in front of him that they knew he wanted and so they used Asakeem as bait. Sam pretended to be a like-minded man that wanted to smuggle Asakeem back into Syria and they had even turned one of Kasami’s men to get him took the deal. So Kasami agreed and they got him out in the open when they made their move. They trapped him and most of his party before they could flee and got them to own up to the others’ deaths.

So it turns out that Asakeem had been telling the truth when he said he hadn’t been part of what happened with the shooting and there had been a moment when he could have made a run for it, but just chose to stay and pray and so Kensi doesn’t know what to think of him. But things were changing and Callen had partially found out why Hetty left. She left because she didn’t want to bring down the agency with an illegal activity. So she hadn’t turned her backs on them. She had just tried to do something she believed and found herself in some trouble because she got taken a prisoner in Vietnam.

And while Nell confronted her sister, Sydney explained that she hadn’t meant to hurt Nell when she did all those things because she had really tried to teach Nell how to be tough or at the very most tougher than she was in a world that wasn’t kind to girls.