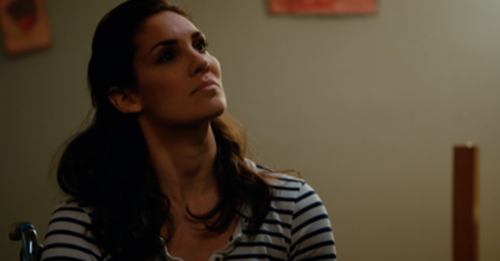 Tonight on CBS NCIS: Los Angeles returns with an all new Sunday, February 19, 2017, season 8 episode 15 called, “Payback” and we have your weekly NCIS: Los Angeles recap below. On tonight’s NCIS Los Angeles episode, as per the CBS synopsis, “Emotions run high for the team as one agent is held in an unknown location and tortured by the mole, while another discovers he was betrayed by someone he least expected.”

NCIS: LA begins tonight with CIA Officer Ferris (Kurt Yaegar) getting creeped out by Kensi Blyth (Daniela Ruah) smiling at him as he tries to intimidate her with the electric saw. She taunts him that maybe she was the one who made him feel like losing a leg didn’t matter; he says he was just playing a role. She scoffs that he doesn’t have it in him to cut off her leg.

Nelle Jones (Renee Felice Smith) and Eric Beale (Barrett Foa) are tracing 3 phones, that lead no where; the last number is at a church in Korea town, they inform G. Callen (Chris O’Donnell), Sam Hanna (LL Cool J) and Marty Deeks (Eric Christian Olsen) where Kensi could be. Ferris answers the phone, but injects Kensi immediately upon hanging up.

Sam says Deeks is too close to this and loosing his focus; they enter the church and go 3 separate directions. In one of the back rooms, Callen finds a woman strapped to a wheel chair with a black bag over her head; when he uncovers her face, they see it is Joelle Taylor (Elizabeth Bogush) and not Kensi.

Deeks wants to know where Kensi is. Joelle says she is fine but just rattled; Deeks gets irrritated when she has no idea who took her nor where he went. Deeks dashes from the room, yelling he has to find her.

Hetty Lange (linda Hunt) is interrogating Vostanik Sabatino (Erik Palladino) asking where Kensi is; he said Ferris never told him. He claims he is on Hetty’s side and telling the truth; saying he wants these guys as badly as she does. Deeks comes in the room and attacks Sabatino demanding to know where Kensi is, after a few punches, Sam pulls him back.

Sabatino tells Hetty her team needs to get a hold of their emotions, she says Deeks is showing more grace than she would have expected. He claims its not personal, she says him and his ghouls were picking off everyone on her team. He said he was trying to weed out the bad ones, she again asks where Kensi is? Sam refuses to let him back in the interrogation room.

Callen brings Joelle back with him; they debate whether to release Sabatino to see where he goes or keep him locked up. Nell returns to the church to look for evidence, bouncing ideas with Eric. Their question is why did he leave Joelle behind; Nell says maybe Kensi wasn’t even there and they have no idea where she is or what she has been through since Ferris took her that morning?

Hetty tells Callen to use his instincts with Sabatino because he is a parasite. Callen says the only question he has is how did Sabatino think this was all going to end? He says he was hoping he would end up the hero bringing in corrupt CIA agents. He says he is their only shot of finding Kensi. He says Ferris has gone underground and IF Kensi is still alive, he took Kensi with him. Callen says they will find her another way; Sabatino says that is a mistake and Ferris is sick, and he didn’t join the CIA out of love for his country.

As Sabatino continues to talk to Callen, Deeks is angry saying Hetty shouldn’t have let Kensi come back, she wasn’t ready. Sam says Kensi is as tough as nails, she will survive. Meanwhile Ferris attempts to wake Kensi up telling her they are home.

Sam joins in on the interrogation where Sabatino says he had nothing to do with the men showing up at his son’s school. He admits he didn’t know about them until he saye Hetty recall Carl Brown (Adam Bartley). Sam is pissed off that Sabatino is giving his wife, Michelle a bad name; Sabatino insists they need him to help them.

Deeks throws a table out of frustration and Hetty asks him if that makes him feel better. When Hetty says Sabatino might not have anything to give them, Deeks says he cannot live with that; Hetty says he might not have a choice. He accuses her of putting Kensi in this position in the first place. He tells her if anything happens to Kensi it is all on Hetty.

Nell finds a black case that the electric saw was in, she shares with Eric that it is empty and she finds what appears to be wheelchair marks in the dirt, the same as in the room where they found Joelle. Eric yells “beard” and Nell says no beard. Eric draws his gun as an older man walks through the room he is in.

He refuses to drop to his knees, and throws Hetty’s key card at Eric, revealing Hetty gave it to him. Eric learns he is retired Admiral AJ Chegwidden (John M. Jackson). He orders Eric to get him up to speed after they joke about being gamers. Sam and Deeks give in on Sam’s suggestion of trusting him. Hetty tells them to “give em hell”.

A woman (Anzu Lawson) arrives at Owen Granger’s (Miguel Ferrer) room, telling the officer outside she just wants to hold his hand for a while. She turns off the monitors and prepares a syringe, she injects it into his IV and he shoots her pushing the monitor onto her.

Eric is showing Admiral around when Nell returns; he tells her Henrietta (Hetty) needed his help and that’s why he is back. He says NCIS: LA is a mess and orders Eric to sent full security detail to the hospital and boat shed. He wants security footage of the shooting and a full work up of the woman Granger killed. He wants to know where Hetty is, Nell says she doesn’t know and Eric says the boat shed. Admiral says crew it, and send security to the hospital he is going to the boat shed himself.

Sabatino brings Callen, Sam and Deeks to an address he was given, but they feel they are being set up; when they enter the house they don’t find Kensi and Sam reminds him it isn’t over. Hetty gives Joelle tea, and tells her, her betrayal of Callen will not go unpunished.

Joelle says she was initially there to keep an eye on Callen but she never meant to hurt anyone, she was dragged into like the rest of them. As Joelle raises her gun to shoot Hetty, Admiral knocks her out with a boat oar. He learns the red-head was Callen’s ex-girlfriend.

Ferris attempts to wake Kensi up, who pretends she is choking so he would cut her loose from the wheelchair; she kicks him away from her, but he grabs a sledge hammer to crush her hands. They are heavily fighting, both bleeding when a man and woman come in and tell them both to hold it.

At the boat shed, Hetty says she needs answers from Joelle. He dumps cold water on her face but her head hurts. Hetty wants to know where Keni and Ferris are. Callen runs to Joelle who is still lying on the ground. Hetty orders him to step back from Officer Taylor (Joelle). Deeks says, “Oh Snap!” and Sabatino sarcastically says that he was supposed to be the bad guy.

Nell visits Granger, who tells her field work suits her. She comes to retrieve the woman’s cell phone. She uses the dead woman’s ring finger to unlock the phone. Callen confronts Joelle about her lies, he forgives her for the lying as its part of the job, but he can’t forgive her for the betrayal. Callen leaves the room and Sam asked if he wanted to talk, he blames them for introducing them.

Eric calls, giving them another address where Kensi could be. The man and woman have restrained Kensi again in the wheelchair and the woman gets a call with photos of a dead Granger and Hetty.

When they arrive at the address, Sabatino is handcuffed to the door of the SUV. Ferris and his accomplices know they have arrived. Sam kills the man as Callen and Deeks dodge bullets. Kensi calls for Deeks as Ferris has the saw running at her neck.

When he shoots the man in the head, Kensi says, “double tap to the head? You must really love me!” He is worried that his baby is bleeding; Callen and Sam arrive asking if Kensi is okay, they both tell them to get out of the room. Deeks confesses she really scared him.

Deeks carries Kensi over the threshhold, blissfully happy until he also sees that Sabatino is gone. Hetty thanks Admiral for coming to help; she says better people have tried to kill Granger, including him. He says he was young and Granger was stupid. She offers Admiral to stay a while, she could use the help and maybe even a good lawyer.

At home, Callen takes a saw and finally cuts the table in half that he bought with Joelle; kicking the pieces apart. Hetty sits with Granger, telling him he just needs to rest. He jokes a little and she tells him to stop being a smartass.