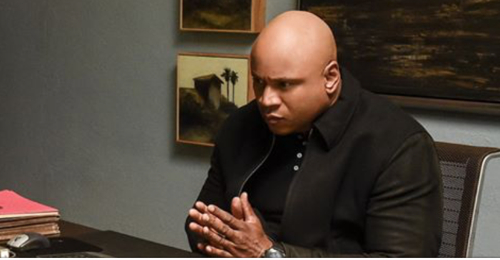 Tonight on CBS NCIS: Los Angeles returns with an all new Sunday, May 7, 2017, season 8 episode 23 called, “Uncaged” and we have your weekly NCIS: Los Angeles recap below. On tonight’s NCIS Los Angeles episode, as per the CBS synopsis, “Sam’s wife is kidnapped and her abductors demand that Sam’s arch nemesis, Tahir Khaled, be released from prison in exchange for her. ”

A man is walking his dog and comes across a dead man hanging from a pole. He calls the police. Sam and his family eat breakfast as he gets a call from Henry that a man in custody wants to give information but will only speak to Michelle. They drop off their daughter and head to meet with him. They review Sidorov’s case before they go to meet with him. He tells her about a pending purchase of uranium.

Cullen picks up Sam and they go to check out the scene where the man was found hanging. They find out the victim is Tom Olsen. Sam is upset about the death. He and Tom were Navy Seals together. As Sam talks to the FBI the real Tom Olsen comes up. It turns out someone stole Tom’s ID several weeks ago. It was a set up to find Michelle. Just as Sam calls to warn Michelle, three men break into the house and kidnap Michelle.

Sam and the police arrive at the house but Michelle is already gone. Marty and Kensi join the search for Michelle. Sam and Cullen return to Sidorov to see who he is working with. He refuses to cooperate. Marty and Kensi see that a building across the street has a camera so they download the images. The team gets a call with video of Michelle. The kidnappers say that Khaled must be released or Michelle will die. They are keeping her in an air tight room with only 8 hours of oxygen.

Hetty realizes that Khaled is in the same prison as Sidorov. Michelle thinks they drove 90 minutes to get to the kidding place. The team estimates that she is within a 20,000 mile radius and is being held in a freezer or refrigerator. Sam and Cullen go to the prison to talk to Khaled. He mocks Sam and offers no help. Sam gets a call from Sabantino and goes to meet him. Sabantino has Sidorov and shots him in the leg and demands that he tell Sam everything.

He tells Sam he doesn’t know who paid him but a large sum of money was transferred into his bank account in Russia. Cullen tries to track the money to find the kidnappers. The money originated in North Sudan. Michelle is down to 4 hours of oxygen. Sam goes to talk to Hetty. Hetty is working on getting Khaled released. They both realize that is their only hope. There is just not enough time to find her. Michelle and Sam talking about their life together and cry.

Hetty is able to get Khaled released but the team must watch him at all times without being detected. Michelle struggles to breathe. Khaled is released and picked up by a white car. Callem follows Khaled by helicopter as he drives into a parking structure. Soon five of the exact white cars leave the structure and Callem loose Khaled. Hetty calls off the tracking of Khaled.

Sam realizes that Michelle is being held within one mile of their house. All available agents join the search. Marty and Kensi return to the warehouse where they got the camera footage to search for Michelle. Three men open fire on them. They know she is being held there and just have to find her. They shoot the men and find Michelle but they are too late. She is dead.