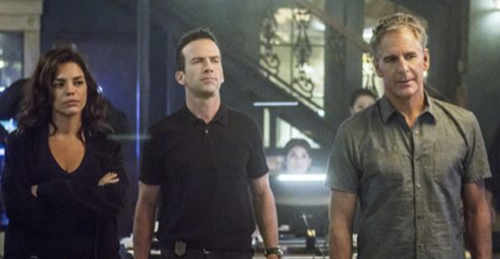 Tonight on CBS NCIS: New Orleans returns with an all-new Tuesday, October 3, 2017, season 4 episode 2 called, “The Asset,” and we have your NCIS: New Orleans recap below. On tonight’s NCIS: New Orleans Premiere episode as per the CBS synopsis, “Pride and his team join forces with FBI Director Isler when a Russian operative, who is in the U.S. to provide intelligence on sleeper agents, disappears after his Navy escort is murdered. Meanwhile, Tammy partners with former sleeper agent Eva Azarova to locate the missing operative Eva has known since childhood.”

The team was investigating a disappearance. There had been a 911 call about a domestic disturbance at the home of Petty Officer Lindsey Kirk however the cops had come by and they hadn’t found anyone much less evidence of a break-in. But then Kirk missed two days of work and her CO had gotten worried about her. So NCIS were brought in when there’s no was evidence of Kirk leaving town and they thought they found something suspicious when they checked out Kirk’s home.

Kirk’s home had initially come across as pristine and the one thing that seemed out of place had been her dresser. There were marks in the floor where the dresser had been dragged. So LaSalle checked behind the dresser and he saw a dent in the wall, but the surrounding area had showed blood splatter and so Kirk’s head must have gotten thrown into the wall. But, unfortunately, there wasn’t evidence of anyone of having a problem with Kirk and the one lead they had came from an unlikely source.

The source was Martha Roberts. She was known as a kook and thought she had a personal connection to Pride. But Pride was going away that weekend to have a Father-Daughter Fishing Trip and so he didn’t have time for Martha. She was unstable and the team knew they couldn’t rely on anything she said. So Pride tried to fob Martha off on someone else and she had seen right through it. She knew that he was trying to get rid of her and she wasn’t having it because she just wanted to work with Pride.

Martha considered Pride to be her mentor in crime-fighting and so she didn’t want to let Pride get away. But Martha waited until Pride was alone before she made her move. She came up behind him and used her stun gun on him. So Martha ended up taking Pride prisoner and she also made sure that no one would go looking for him. She texted his daughter with his phone saying that he had to work and allowed his team to still believe he had gone on that fishing trip. And so Martha had Pride all to herself and she wasn’t going to let him go until they caught their culprit.

Martha believed a man she called “Mr. Lonesome” has been kidnapping women from all over Louisiana for the last decade and she wanted to catch the guy with Pride. Pride was basically Martha’s idol and so she thought he would see the pattern that she was apparently seeing. But Pride couldn’t full trust Martha even if Martha was onto something. She said that the guys she’s been tracking has been kidnapping women with no families because he didn’t want anyone that would miss them and that his guy has a type.

Martha said that Mr. Lonesome went after brunettes with blue eye that tended to keep to themselves and so she texted LaSalle with some things she’s picked about Mr. Lonesome because she wanted to prove to Pride that she was onto something. But Pride had waited until she was out of the room before he escaped his rope ties and he had sent a message saying Martha had kidnapped him. So Martha later punished Pride for that and she said that his message wouldn’t get through because she had a signal blocker up.

Martha hadn’t trusted Pride to sit still and so she had been very angry at her prisoner when he doubted her like so many others. But Martha would have lashed out even further if LaSalle hadn’t texted back. LaSalle and the others had followed the clues Martha gave them and they had found a body. The body wasn’t Kirk though she did fit the profile and Martha knew who she was. She was Shelley Wright and had supposedly run away from Baton Rouge nine months ago. So Martha thought she had been proven right except Pride had his doubts.

Pride has asked Martha a few questions about Mr. Lonesome and she told him everything she knew. Like how the killer builds sundials for his victims and leaves them flowers because in his mind he isn’t the villain. She said that Mr. Lonesome thought he was saving those girls and that he wouldn’t kill them right away. But Pride reminded Martha that she kidnapped the same way Mr. Lonesome kidnapped those girls and that he didn’t really see a difference between the two. So Martha got what he was trying to say and she freaked out after been accused of being Mr. Lonesome.

Martha said that she wasn’t the killer and that she had deliberately gone off her medication because she had wanted to get justice for Mr. Lonesome’s victims. But while Martha was freaking out, Pride’s team had caught on to his disappearance. They knew that Pride had gone fishing where he couldn’t get reception and so they called Laurel when they couldn’t get in touch with their boss, but she told him that her dad texted her he was working on the case. So the team traced the text message they received and they tracked back to an area they could search.

The area had a handful of cabins nearby and so it hadn’t taken the team long in finding Pride. But by then, Pride no longer believed Martha was Mr. Lonesome. He told his team to back down and then he finally talked to Martha. Martha had been put in psychiatric care when she was twelve and the people responsible for her had thrown her into a sensory deprivation room. So Martha knew what it was like to be thrown away and she had focused so much on the case because she didn’t want those girls to suffer from the same thing. And so Martha proved to be invaluable.

Martha told the rest of the team that Mr. Lonesome stalked his victims to the point where he knew everything about them. Almost like it was magic! But Gregorio figured he must have been spying on the women through the same source and so she checked their phone records. She found out each victim had called the Helpline in their area and that they were looking for someone to talk to when they accidentally gave Mr. Lonesome all he needed to know. So the team found out who it was that talked to these girls and they found their culprit.

But the guy was so demented that he didn’t want to talk until Pride and Martha pretended to be on his side. The two had said that he had just been helping those girls and that he needed more time with Kirk to help her. So once he thought he could see Kirk again, Mr. Lonesome led them right to her and they were able to save Lindsey Kirk’s life. And “Mr. Lonesome” only got to see her again as he was being loaded into the back of a car!

And afterwards Pride finally went on his fishing trip with his daughter!