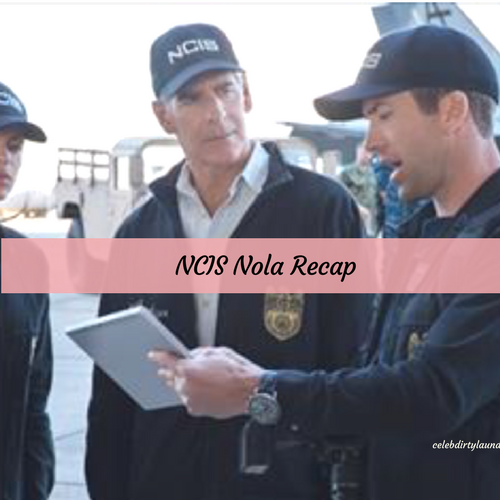 Tonight on CBS NCIS: New Orleans returns with an all-new Tuesday, 28 March 2017, season 3 episode 19 called, “Quid Pro Quo,” and we have your NCIS: New Orleans recap below. On tonight’s NCIS: New Orleans episode as per the CBS synopsis, “While investigating a deadly accident at a naval base, the team discover that a unit of Seabees was poisoned with a contagious super virus, leaving the rest of the base and the entire city of New Orleans at risk for a catastrophic outbreak.”

Pride was still looking into Javier Garcia’s death. He knew that someone must have tipped off the cartel and had hoped that Sebastian’s technical skills in the field could help him. But as far as Sebastian could tell, the only thing that he found that hadn’t matched the official report had been mere semantics. He said that there was a chance that debris had landed in the opposite direction that the feds had put down and that there could be evidence out there that no one has processed however Sebastian hadn’t been too sure about his findings and had asked Pride to give him more time.

Sebastian knew what Javier’s death meant to Pride and so he had promised his friend that he would keep looking. However, a dead petty officer came first. Petty Officer Robert Campbell had taken a nosedive off a scaffold that was several feet in the air and his commanding officer didn’t believe it was suicide because Robert had been uttering something strange before he seemingly jumped. Robert had apparently been asking his CO to make it stop and he had be holding his head at the time. So Pride had questioned Robert’s state of mind seeing as there was a chance he could have taken drugs.

Yet, no one that knew Robert had believed he was on anything. They said that Robert’s recent behavior was out of character and they truly believed that something must have affected him. So NCIS checked the victim and they had suspected that something was off. They had noticed that Robert’s eyes were jaundiced and so they had asked about that though they had been told that there was some kind of cold going around the naval base. Robert’s partner who had been working him throughout his entire detail had reportedly been sick and had taken time off to get better. And therefore NCIS had to question the petty officer.

NCIS needed to know what Robert had eaten or if he complained in the last several days of feeling different. Though right away, LaSalle noticed that Robert’s friend had also had jaundiced eyes. So he had asked if the two had eaten the same thing recently and he had been told about the cake. Someone had left cake for the Seabees as they’re called and it had just said welcome to Bell Chase, but a rat had found some of the leftover cake and it had showed the same symptoms that the two Seabees showed. And so there was something wrong with the cake. It had killed one naval officer, a rat, and it looked it was going to kill even more people.

So Wade and Sebastian took Robert’s body as well as that cake back to the lab. They had tested it for poisons and it had come back negative however NCIS later found out that it had been definitely been the cake. The baker who had made the delivery had also been poisoned and he had showed defensive wounds meaning he had gotten into a fight not that long after being exposed. But Sebastian had done some further testing because once he ruled out common poisons and he had found out what was making everyone so sick. And it turns it had been a virus. A virus that was created out of several other deadly viruses.

In other words, someone had gone out of their way to create a killing machine and it had hit close to home for NCIS when their very own Dr. Wade became sick yet she hadn’t known that she was exposing herself back at the crime scene. Wade had unfortunately touched the body and skin contact was one of the very few ways that could transfer the virus. The other way was ingesting it like Robert and his fellow Seabees had done. So Sebastian was safe enough because he hadn’t been in the room when Wade was taking blood and urine sample for the victim. However, he was willing to ignore his good luck in order to help Wade.

Sebastian had felt responsible for what happened to his friend and he had wanted to risk everything to find a cure. Yet, before he put himself in harm’s way, Sebastian had decided to hand over everything he had found working Javier’s case to Pride. He said that Pride should have more than enough to bring in Mayor Hamilton in case he didn’t make it though Pride wasn’t willing to accept that type of answer. Pride had told Sebastian that they’ll take down the Mayor together and that they’ll get through this current crisis. So Sebastian had tried to do his part and he went back to Bell Chase to test everyone that was affected.

Though while he was out of the office, LaSalle and Gregorio had found a dead naval officer that was from the base as well as two marines that were dead, but somehow still able to check themselves into the naval base. So Pride and the others had realized fairly quickly that whoever was targeting them had found a way to get inside the base and that Sebastian could be in trouble. And so they had tried to reach Sebastian. They had called him on his cell and had even tried to reach him through third parties on the base when they had been left with no other choice than to head down there to rescue their friend.

So Sebastian’s friends were coming to his aide because they didn’t think he would noticed the marine response team weren’t as they seem however Sebastian had noticed. He noticed that the two guys posing as Corporals Lin and Davis weren’t interested in the slightest about finding a cure or helping one of the many victims and he had taken action. Sebastian had spied on them and had kept his gun ready just in case. But the operatives realized that they had been caught and had chosen to poison themselves rather than being taken alive. And so they had helped Sebastian in a way because he had noticed that the foreign agents had had an antidote.

Sebastian had apparently seen the operatives without any protective gear on and he had realized that they hadn’t been scared of being drugged. However, Wade was slowly getting sicker and they didn’t have time to find a cure by shifting through blood. So NCIS tracked down who else was part of the bioterrorism and they had found another operative yet he was just as committed and didn’t want to talk so Sebastian threatened him. He threatened their lone terrorist with the same virus he had used on his victim and that had scared the other man enough that he gave up the cure without much of a fight.

And so Sebastian saved Wade’s life though NCIS later lost their lone remaining operative when another terrorist shot at him through a brick wall. So Pride and Gregorio had tried to track down their shooter and unfortunately he left the scene before they could catch him. Yet, the bullet casing they had been American tech and that meant there was a homegrown tech so Gregorio looked into the shooting. And she found out that same shooter that killed their terrorist had also killed Javier Garcia meaning the Mayor was involved in something much bigger than drugs.

So Pride later visited Mayor Hamilton at his office and he told him the gloves are off!