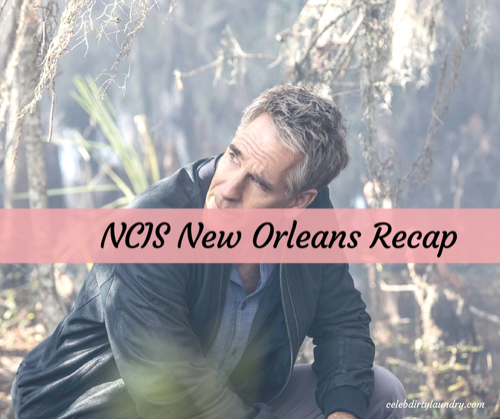 Tonight on CBS NCIS: New Orleans returns with an all-new Tuesday, March 7, 2017, season 3 episode 16 called, “The Last Stand,” and we have your NCIS: New Orleans recap below. On tonight’s NCIS: New Orleans episode as per the CBS synopsis, “Pride’s longtime friend enlists the team’s help with an investigation into the disappearance of a JAG lawyer who specializes in classified cases and volunteers at a private-military academy

However, Pride had called in everyone before they could actually place bets. So only Gregorio still felt the need to prove a point and she came across as a little overbearing all because she suspected that Pride was also taking on a case for this mysterious woman yet she might have been onto something. Pride after all was investigating a missing person that had been missing less than forty-eight hours which wasn’t normal procedure and the only one that was concerned about his condition had been former commanding officer who’s gut Pride wants to trust.

So Gregorio had wanted to know who was this woman and she turned out to be ADA and JAG lawyer Rita Devereaux though Rita admitted that she goes a long way back with Pride and the two of them rarely call each other by anything besides their first names. Yet, Gregorio had wanted to know what made Rita suspect that something happened to JAG lawyer Noah Sandler and so she benched her side investigation into Pride’s love life to see if there really was something wrong with Sandler. And, well, Rita had a right to be concerned.

Rita had said that Sandler had reached out to her out of the blue and that he said he needed her help on what sounded like a case. Though Sandler never met up with Rita like he was supposed to and his home computer had been wiped. So they tracked his laptop and had found it at Lake Verret where a lot of people often go gator hunting, but they never would have gone out there alone so NCIS had checked out the scene and they had found Sandler’s car abandoned by the side of the lake. With his laptop still inside and no signs of Sandler.

The laptop however had been used to wipe his home computer and Sandler didn’t need to come out by the lake to do that. But just as they were finally believing his disappearance was suspicions, the team noticed a flock of crows by the lake and it led them to Sandler’s body. So that turned their simple case into a homicide and what made it worse were the suspects. It had later been proven that Sandler had been looking into Fort MacArthur. Fort MacArthur was a military reform school and Sandler had often volunteer there because it had once turned around his own life.

However, the school was the only active investigation that Sandler had. So right away NCIS knew that the school had to be involved in some way and they also knew that a homicide could jeopardize the school’s future yet Pride didn’t want that. Pride truly believed that the young men there could be reformed and so he had wanted to take the investigation slow meanwhile Rita wanted to do the exact opposite.

Rita had found out that Sandler wanted her to open the sealed juvenile files of some of the cadets and so she did. She opened Terrence Lewis’s file and he had a history of violence. So she had thought that was more than enough to issue a warrant for him though he was nowhere to be found. Lewis had allegedly ditched reform school and no one had heard from him since. Yet, Rita was so sure of his guilt that she wasn’t afraid to try him in court of public opinion and it took Pride everything to talk her out it.

Pride had said that they shouldn’t jump the gun and that he was still running an investigation. Though Lewis was eventually found in the same swamp that Sandler had been dumped and he had been there for a lot younger. So Pride was vindicated in a sense because Sandler must have been looking into Lewis as a victim, but Wade’s autopsy had showed that the school needed to be question as well. She had found evidence that Lewis had been beaten with soap and that he had died from blunt force trauma to the back of the head.

So that made Lewis’s squad who all claimed that he had runaway suspects. But Rita had wanted to issue mass warrants for the entire school because she said everyone had a record and that some of them couldn’t be reformed and that Lewis meant she didn’t have to take Pride’s lead however Pride had tried working around her. He and his team went back to the school and they had gotten permission from General Walsh to check all the cadets’ guns seeing as one of them must have been used to kill Sandler.

However, what they didn’t know was that General’s second-in-command had been behind everything. So Dorsey told the cadets to secure the area and he was going to frame them for both murders even though he had been the one to tell them to haze Lewis and then he had killed Lewis to cover up his own actions. And it just gets worse from there because Dorsey had also killed Sandler yet he was trying to pin everything on the boys and make himself look the hero because he had wanted the General’s job.

That’s why two people are dead. Dorsey had applied for the job and he had gotten turned down because of the many times he had been reprimanded for endorsing hazing. Yet, Gregorio had protected the boys from him in order to take him down and she had even been right about Rita. Rita had been Pride’s ex and there was still something between them. So all in all Gregorio still managed to get her money out of the others.