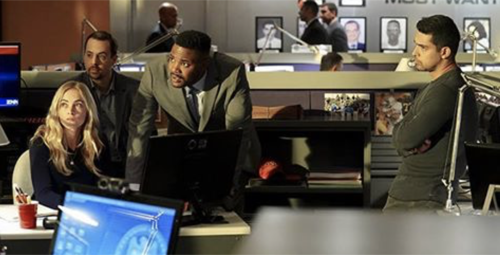 Tonight on CBS NCIS returns with an all-new Tuesday, October 24, 2017, season 15 episode 5 called, “Til You Make It” and we have your weekly NCIS recap below. On tonight’s NCIS season 15 episode 5, as per the CBS synopsis, “Reeves sees his friend get kidnapped and the investigation reveals the primary suspect disappeared two days earlier with confidential military information. Meanwhile, an embarrassing photo from McGee’s teen years becomes a popular meme.”

Special Agent Reeves was going to AA. He’s been part of the group for a while and still hasn’t shared anything personal with the group because he wasn’t entirely comfortable with them yet. But Reeves was slowly making friends within the group. He had met Melissa and the two had hit it off from the start, however, Reeves had noticed that Melissa was in a toxic relationship and so he had been happy for her when she recently revealed that she had broken up with this ex. She said he had gotten mixed up in something that she didn’t approve and had had to break up with him. So Melissa didn’t go into too much detail except the bruises on her arm didn’t need an explanation.

Her ex-hadn’t taken it well when she broke up with him. But Reeves had offered to help her and she said she could handle her ex-boyfriend on her own. She hadn’t wanted Reeves to go out and rough him for her. So the two did their best to put what happened behind them and they were leaving AA together when the unthinkable happened. A car sped up next to Melissa and she had been grabbed before Reeves couldn’t even do anything about it, but Reeves hadn’t given up on his friend. He had filed a report with Metro Police and had given them the make and color of the car. And they had basically told him that there was nothing they could do.

But Reeves didn’t want to leave things there. He went into work and he had opened an official case into Melissa’s disappearance. So Reeves had had to ask for help from the others and unfortunately, he hadn’t had enough information go off on. He knew her name was Melissa, that she had a dog growing up that she loved, and that she was part of a bicycle club though the club was what helped Abby. Abby had used facial recognition to find out which bicycle group Melissa had joined and so she found out her name was Melissa Goodman. Melissa has had the cops called on her and her boyfriend so many times that his name was still in the system.

Melissa’s violent ex-was identified as Eddie Holdran. But Holdran hadn’t been heard from in a while and he had taken something before he seemingly disappeared. He had stolen an ONI laptop and it carried confidential military information on it. So Reeves assumed that was Holdran’s risky plan that Melissa hadn’t wanted any part of and he worried she had been taken because she knew too much yet Reeves had later been given an idea from Gibbs. Gibbs had figured out Reeves and Melissa were in AA together and so he asked Reeves who else Melissa would confide in. And that would be her sponsor, Nancy D.

Nancy knew the good and bad about Melissa. But she had a lot to say about Holdran. He was abusive and manipulative. So Nancy had tried to get Melissa to leave him and she just never would. Melissa would cover up her bruises and recently she had hidden out at his cabin because she had gotten beaten up so bad that she hadn’t wanted anyone to see. And so Reeves tracked down that cabin, however, Melissa hadn’t already freed herself by then. She had noticed her ex was slurring and stumbling around like he was drunk and she figured he was gearing himself up to kill her. And he had wrestled with him over the gun the second she had gotten the chance.

But the laptop hadn’t been at the cabin and Holdran had been killed in his struggle for the gun with Melissa. So didn’t look good for NCIS because DOD still wanted answers. The information on that laptop detailed a new drone that Holdran and his team had built and therefore it was imperative that the team find the laptop. And their best bet was Melissa! Melissa had been so high strung after she killed Holdran that Special Agent Jack Sloane believed she hadn’t fully processed the fact that she was safe now yet Jack knew how to help Melissa. She took the other woman down to the morgue and Melissa see for herself that the man she hated as well as loved was dead now.

So that allowed Melissa to think things over. She told Jack about the times when Holdran would follow her around or join her bike club so to make sure she wasn’t seeing anyone else. But a memory that had stuck out for Melissa had been the time she went down to their storage locker and had found the locks changed. She thought Holdran did that to keep her from going out with her friends and she hadn’t suspected anything else about it while Jack did. Jack suspected Holdran could have hidden the laptop there and change the locks to keep Melissa from ever finding out what he was doing. And so NCIS checked the storage locker.

They had found mostly dust and we’re going to give up until Reeves noticed the Christmas box was on top of the Easter box which didn’t make sense. He said if anything that it would be the Easter box on top because that was the last one used. But looking into the Christmas box, they eventually found the laptop and also learned that Holdran had sold the information already. The maps and everything related to the drone hadn’t been on the laptop. So the team looked into Holdran’s movements to find out who he had been speaking to. And they found footage of Holdran meeting up with Melissa’s sponsor.

Nancy had claimed she never met Holdran and so NCIS confronted her with footage of the two getting cozy. But Nancy hadn’t known that was Holdran. He told her his name was Austin and they had met on an online dating site. So the team kept digging into Holdran and Jack found certain holes in Melissa’s story. Melissa had said that Holdran was violent, but he had no prior history of that with any of his past relationships and Jack’s profile of him has him as a sweet and loving man. And so she did another profile of Melissa and she found out Melissa suffered from a personality disorder that meant she was cunny and vindictive.

Melissa had only recently joined AA and so the team investigated her despite Reeves telling them they were off base. But their investigation led them right back to Melissa. Melissa hadn’t been abused and she was never an alcoholic. She had found out her boyfriend was cheating on her with Nancy and had joined the group to get close to Nancy. So the whole kidnapping and theft thing hadn’t been on Holdran. It had been on Melissa and NCIS had caught her trying to sell the information on the black market.

So Reeves had been disappointed because he truly thought Melissa was a friend, but he still attended meetings and he decided it was time to finally up to others.