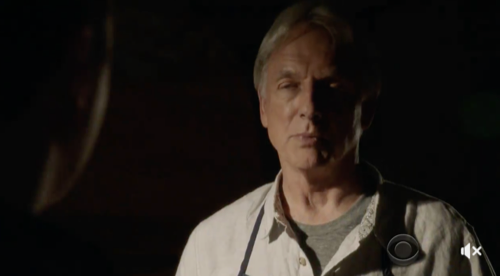 Tonight on CBS NCIS returns with an all new Tuesday, October 3, 2017, season 15 episode 2 called, “Twofer” and we have your weekly NCIS recap below. On tonight’s NCIS season 15 episode 2, as per the CBS synopsis, “NCIS investigates when the body of a murdered Navy lieutenant, who disappeared over a year ago, is found by a cemetery grounds crew while relocating caskets on the property. Meanwhile, Gibbs and McGee must pass a psych evaluation before they can officially resume working..”

The men were home! But they needed to be officially cleared by Dr. Grace Confalone before they could return to fully duty and so she put them on something called “light duty”. The guys had gotten a call from Bishop about a body being found and that they were needed. So Grace had allowed them to return to work though she didn’t want them to strain themselves and therefore they were told to hang back. Gibbs couldn’t assume control of his team and had to let Bishop continue to the run show until he had his mental evaluation.

Though taking a step back hadn’t been easy for McGee. McGee acted like everything was fine and so the only one that noticed something wrong was Gibbs. Gibbs had also come back different however he was experiencing moments of happiness or at least happiness for him. So the guys were happy to take a step back and they Bishop run the show because she was good at it. Bishop knew how to handle the team and put everything in order. And so Torres was the only one it seems that had ever doubted her.

Torres admitted to the guys that he hadn’t thought much of Bishop in the beginning because he thought he had more experience than her. However, he also confessed that Bishop had surprised him. She was good at the job and he said the guys didn’t need to worry about all those months they were away. So Bishop took offense at that. She knew she had the experience to do the job and had even reminded Torres that she had spent several months in Iraq, but Bishop knew how to later get her revenge because she saw how freaked out Torres was at the cemetery.

The team had been called to the cemetery because as they were moving coffins, the construction crew had found one coffin with two bodies in it. So the team hadn’t known what to think. They had come across a poor old woman’s grave and had found a dead sailor in there as well and yet there was no connection between the two and enclosing a coffin took a certain amount of knowledge. But Bishop decided to just look into their sailor and see where that got them. Therefore, they found out their victim was Lt Richard Coyne.

Coyne had disappeared a day before he was supposed to testify against known criminal, Leo Vairo. Leo Vairo had broken into a gym and had shot the owner when the other man wouldn’t give him the two hundred dollars in the safe. Yet, Coyne had walked in on the crime and had seen the other man’s face before he fled. So Coyne identified Leo as the culprit and that would have been Leo’s third strike if he had been found guilty though not that surprisingly Leo ended up walking from the charges after the only witness couldn’t be found.

So Leo was the team’s biggest suspect. He had motive for getting rid of Coyne and even Coyne’s widow believed Leo killed her husband. She said that Coyne had been nervous about testifying and that she told him not to go through with it because she didn’t like it was doing to him, but Coyne refused to back down. He had seen Leo target Pete Wilkins (the owner of the gym) and he thought it was his duty to get justice for Pete. Though Pete eventually went on to begin dating Coyne’s wife Donna after Coyne went missing and so Bishop thought that was suspicious.

Bishop and Torres both questioned the couple to find out when their relationship began and they both heard the other parties deny anything nefarious. They said they didn’t start getting to know each out until after Coyne disappeared because they had been concerned about what happened to him. Coyne had befriended Pete following the shooting and two had had gone through rehab together. What with one suffering a gunshot wound and the other throwing out his shoulder when he tried to take on the thief. So the best friend and the widow had comforted each other when Coyne disappeared, but they still wanted justice for Coyne.

Donna and Pete were firm about Leo being behind what happened to Coyne. But they said that this time they wanted justice for Coyne because they didn’t want Leo to walk away a second time. So Ducky and Jimmy worked on the autopsy and Jimmy later passed out because of something in the victim’s liver. Coyne had had a cocktail of drugs in his liver that had crystalized into a gas that knocked out Jimmy however the team couldn’t figure out how a man like Coyne would get his hands on some of those drugs so they worked on a theory involving someone drugging him.
If someone did drug Coyne then that meant the culprit would have had to have gotten close to the victim. However, it was doubtable he would have let Leo get anywhere near him and the fact Leo never dealt those kinds of drugs showed had seemed to put him in the clear. So Bishop and Torres decided to talk to Leo again and see if he had anything to say about Pete because Pete as it turns out wasn’t so clean. He had gotten arrested for coke possession and Leo confessed that Pete had started to deal high-end sports drugs which was why Leo had targeted Pete’s safe to begin with.

Leo said Pete had much more than two hundred dollars in his safe. So the team looked into anyone Pete could have bribed and they and they found his former high school classmate that just so happened to be working at the cemetery. Yet, Pete later said Coyne’s death had been an accident. He said that he had given Coyne painkillers to help with the shoulder and that Coyne had experienced a nasty reaction, but he didn’t take Coyne to the hospital because he hadn’t wanted anyone to find out about his side business and then later he didn’t want Donna to learn what he did.

But Donna told Bishop that she was willing to testify against him because of what he did to her husband. So Pete will be going away for a long time everyone had been sympathetic about Donna. They knew she had gotten hurt the most out of everyone and so the team were inadvertently more worried about her than they were about their own. McGee had tried putting off his therapy session until Gibbs pushed him into doing and he found lighter by simply talking about his ordeal. Gibbs on the other hand was cracking jokes and smiling with everyone though his hands kept shaking and so he continued to see Grace on his own time because he knew he needed help.