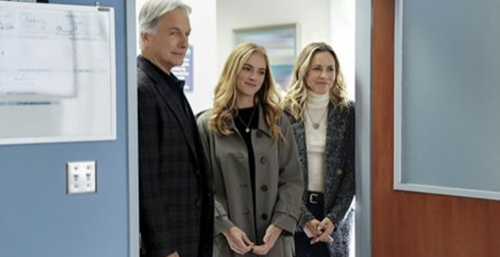 Tonight on CBS NCIS returns with an all-new Tuesday, November 21, 2017, season 15 episode 9 called, “Ready or Not” and we have your weekly NCIS recap below. On tonight’s NCIS season 15 episode 9, as per the CBS synopsis, “The team’s Thanksgiving plans are put on hold while they track an elusive arms dealer in D.C. who recently murdered an MI6 officer who was Sloane’s close friend. Also, Abby races Delilah to the hospital when her labor starts three weeks early.”

McGee and Delilah still hadn’t come up with names on tonight’s all-new episode when she suddenly went into labor a good three weeks early.

But Gibbs understood the situation. He had been a father himself and therefore given McGee leave to go to his wife while the rest of them stayed behind to investigate the murder of MI5 Agent Nigel Ford. Ford had been something of a legend back in the UK and Reeves had even been a fan of his, however, the last time anyone had heard from Ford he had been working a case involving a known arms dealer. So Jack Sloane was able to confirm that Ford had still been working that particular case and had in fact followed the arms dealer to the states because Andre Yorka had entered the country on a fake visa. And so Sloane was the team’s best resource in finding Yorka.

Sloane had worked the Yorka case with Ford as part of a joint task force and she had continued to follow it afterward thanks to the relationship she developed with Ford. The two had been friends for the most part though they occasionally became something more and so it was hard for Sloane to distance herself with his case. But while Sloane was heartbroken, the others were striving to figure out where Yorka might be heading next and McGee turned out to have the answer. The concerned father and husband had rushed to the hospital to be with Delilah. And had been waiting for his wife when he noticed Yorka in the hospital waiting room.

Yorka had gotten injured in the confrontation with Ford and had gone to the hospital hoping to patch up the bullet wound in his leg. But McGee had recognized immediately because he was still getting updates on the case and had gotten a photo of Yorka on his phone moments before seeing the man in person. So McGee notified the armed guard at the hospital about the situation and he also called Gibbs to tell him that he found Yorka, but the guard had gotten too carried away and had spooked Yorka. Yorka had noticed the man was paying too much attention to him and was about to leave when the guard tried to stop him.

So Yorka shot the guard and he had taken a woman hostage as things began to escalate at the hospital. But McGee had already his team about Yorka and so they had been halfway there when they have gotten the call about the hostage situation at the hospital. Therefore, both Gibbs and McGee decided to enter the hospital and see if Yorka would be willing to exchange the hostages with two federal agents yet he had barely gotten the chance to think about the offer when the still living guard had accidentally let slip that McGee should be the one to get released because he had two babies waiting for him upstairs.

Yorka hadn’t known that McGee had come to the hospital for his own reasons and therefore he didn’t realize how valuable McGee was as a hostage until the guard opened his mouth. But everything changed after Yorka learned the truth. He realized he could threaten McGee’s life and that the other agents would get him whatever he wanted. Like a doctor to check out his leg! So NCIS tried to get that doctor and nothing they did or said could get them one because no one wanted to put a doctor in such a precarious situation. And so Sloane came up with a plan that would allow them to overpower Yorka.

Sloane decided to go in dressed as a doctor and the plan was to drug Yorka into submission. But Yorka had been too smart for that. He hadn’t wanted any drugs because he knew that would impair his senses and so he told Sloane to merely work on him without drugs, but Gibbs had then thought he could overtake Yorka if the other man was in pain and had been close to making his move when Yorka’s partner pulled a gun on him. So York had thought everything. He had come to the hospital with someone to watch his back and had even pretended to take her hostage when he noticed the guard wasn’t the only one armed.

But Torres and Reeves had found out about the partner on their own. They had rewatched the footage of Yorka and Ford shooting each other and so they noticed Yorka got away in a car that he wasn’t driving it however that hadn’t been the only thing they found. They also got to Yorka’s hotel room and had found components for a bomb as well as a train schedule. And so they had keep looking until they came across a laptop that carried all the detail for a catering company that was working in the same hotel and was about to cater a prestigious event with visiting nations. Including Romania.

Romania had recently frozen Yorka’s assets and Sloane had profiled him as being a petty/vengeful man. So the men raced downstairs and had found the catering cart with the bomb on it, but were quickly able to deal with it on their own and so they sent a message back to Gibbs saying the bomb was out of play which allowed him to take risks. Gibbs took on the partner and Sloane dealt with the Yorka. But while those two will be facing long sentences in prison, McGee got to return to his wife before the twins were born and therefore hadn’t missed a thing when both John and Morgan were born.