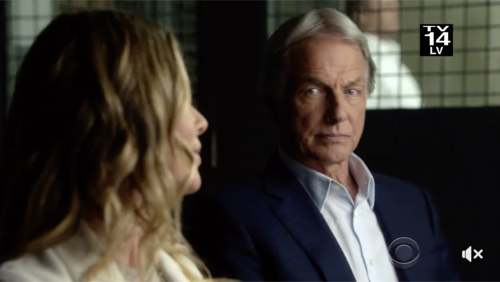 Tonight on CBS NCIS returns with an all-new Tuesday, November 7, 2017, season 15 episode 7 called, “Burden of Proof” and we have your weekly NCIS recap below. On tonight’s NCIS season 15 episode 7, as per the CBS synopsis, “A convicted felon claims NCIS framed him for murder a decade ago, so Gibbs investigates and asks Ducky to conduct a new autopsy. Meanwhile, Senior FBI agent Fornell joins the probe, since he was the lead investigator in the original joint FBI and NCIS case.”

A prisoner named Gabriel tells a public defender that he was framed by NCIS. Meanwhile, Torres is bragging to the gang that all of his shirts are too small in the arms. Yup, all that time in the gym is paying off.

Gibbs arrives at the office. He is pulled in by Vance. They have a visitor, a public defender, Jessica, who wants them to look at Lieutenant O’Connell’ss body. There is something wrong with his autopsy. Donald takes a look. The original M.E. missed the trauma on the head. It was caused by someone that is a lefty who hit the man from behind.  Jessica is happy. Her client Gabriel is a righty. He is innocent.

The team goes over the case files. They are extremely disorganized. McGee points out that Gabriel lied about his alibi. The case also lost a major witness. Torres wants to return to the scene of the crime to take a look around.

McGee and Torres take a look around the wooded area. They spot something hanging out from the bark of the tree. It’s the Lieutenant’s license.

Abby looks over the evidence with Bishop, they feel like this was the work of a serial killer. The prosecutor on the case meets with Gibbs. He feels like Gabriel is the killer. Gibbs wants to look into. Vance agrees. He prosecutor gets mad. A joint investigation gets underway.

McGee, Abby, Torres, and Bishop look over the evidence. Prior to the meeting, Abby was too giddy and went through everything. She already has a game plan on some of the items that were taken in.

Sloane and Gibbs sit down with Gabriel and Jessica. Gabriel explains that he thinks he was framed. If he wasn’t, the only answer he has is that this was a consequence.

Torres goes to a store where he has some questions about the bags they used and someone who brought in his fruit. He asks the owner, who tells him he has a sharp memory. And yes, he can remember 11 years ago. An employee of his named Ray has an aunt that brought in the fruit. Ray is still working for him after all this time. He calls he to the front. Torres shows him his ID. The man instantly runs for it. Torres chases him to the back of the building. The two fight. Torres takes him down and out with a sleeper hold. He cuffs him.

Torres puts Ray in the interrogation room. Gibbs watches from outside. Vance comes to talk to him. Gibbs tells him that Torres is in with Ray, the nephew of the missing witness from the case. He doesn’t know much about her. She took off a while ago, but annuity checks come to his house for her and he cashes them.

Abby knows what her name is. It’s Mary Elaine Smith. Meanwhile, Gabriel takes the stand on court. The prosecutor accuses Gabriel of lying about staying in a nearby cabin to write.

Gibbs meets with a very old Elaine. He tells her that her nephew has been cashing her checks. She tells him she left because she couldn’t take care of him. She recalls the day she saw the Lieutenant. She also tells Gibbs that she told her story to the FBI 11 years ago. Gibbs is angry.

Gibbs approaches Tobias. He asks him why he covered up talking to Elaine all that time ago. Tobias tells him that he knows she was lying and he wasn’t about to let Gabriel, a serial killer walk. Gibbs accuses him of manipulating the case to help him land a promotion. He denies it.

Gibbs comes back to the office. He is mad that the team hasn’t made any connections. He heads into Sloane’s office and sparks a fight. She tells him to calm down. She wants him to talk and tell her what is wrong so she can help. Gibbs admits that he is in a predicament. He has to take the stand and if he does he has to tell the truth and ruin a man’s life. Sloane really doesn’t have a good answer or advice so she changes the conversation.

Gibbs takes the stand. Jessica questions him about the witness Elaine. She asks him who Elaine talked to 11 years ago. Gibbs must confess. The court room goes crazy with whispers. Outside of the court room, Tobias admits that he has some relief after Gibbs revealed what he had done.

Gabriel thanks Gibbs for helping him. He slips up about a small detail from his childhood he told them earlier. The slip makes Gibbs question the man’s integrity. He just got a liar off. That night, Gibbs and Sloane follow Gabriel to the baseball cages. That watch him hit balls – he is a switch hitter!