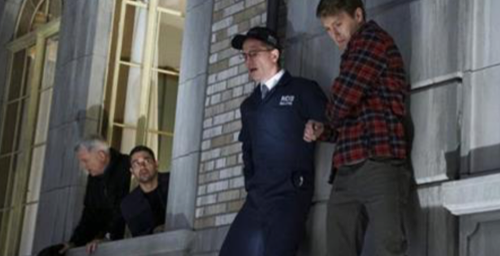 Tonight on CBS the #1 drama series NCIS with an all-new Tuesday, January 24, 2017, season 14 episode 13 and we have your NCIS recap below for you. On tonight’s NCIS season 14 episode 13 “Keep Going,” as per the CBS synopsis, “During an NCIS hit-and-run investigation, Palmer (Brian Dietzen) joins a stranger on the ledge of a building in an attempt to save his life.”

Palmer hadn’t been in a good mood lately. He had been experiencing the winter blues and to make matters worse his family was also out of town visiting relatives. But Ducky had given Palmer some advice. He told the other man that if “he was going through hell, keep going”. So Palmer had tried to take Ducky’s face and persevere when things looked ugly however the two had been called out to a scene of an accident not three blocks away. The accident had apparently been a hit and run and their victim Navy Captain Paul Smith had unfortunately been dead on arrival.

However, there had been two witnesses at the scene and one had gone missing. The older woman that had been at the ATM machine and so she had merely heard the accident instead of seeing anything yet she told NCIS that she the captain’s son could have seen more. So everyone looked for this son that had seemingly fled the scene and Palmer had been the first one to spot him. Palmer had seen Ryan up on the ledge of the nearby building and he had known that the young man was going to jump.

So Palmer had taken a gamble. He had rushed to the ledge without telling anyone and had climbed out the window in order to physically stop Ryan from killing himself. Yet, Ryan didn’t want to be saved. He had blamed himself for what happened to his father because he had gotten laid off and his father had stopped at the ATM to give him something for rent though there was more story that Ryan simply getting laid off. He had also been fighting with his father before the crash because his dad had thought Ryan had needed to finally get settled.

Ryan had graduated college in a field that his father hadn’t approved of and he’s been struggling with getting a job. He later told Palmer that he was constantly getting entry level jobs and that his father felt they had wasted money on tuition for nothing. So that had made Ryan feel guilty because he thought that he had never gotten a chance to please the old man and that the last words Ryan had told his father was that he couldn’t’ wait for his dad to butt out of life. Though there was a chance that Ryan’s father would have always died even if he hadn’t gotten laid off.

The car that had hit the captain hadn’t slowed down or swerve and NCIS believed that could indicate that someone had intentionally run over the captain. But what they kept hearing and how Ryan had also described his father was that everyone had loved Captain Smith. So Gibbs and his people had questioned that. Gibbs had asked the captain’s Operation Officer if she was sure that no one had a problem with the captain and she ultimately confessed that there might have been someone that was upset with the victim.

She told Gibbs that the captain had almost court-martialed the XO. They had apparently been a disagreement with both sides yelling and the XO had gotten heavily reprimanded. However, she didn’t think that Commander Morgan would hurt the captain and so NCIS had to investigate the matter for themselves. They had looked into Commander Morgan and had tried to contact him yet Morgan wasn’t anywhere to be found and he had cell phone turned off. So Morgan was a chief suspect and it looked bad for him.

Yet, things were fine as long as Palmer kept Ryan talking. Palmer had had a near miss when he almost fell off the ledge though Ryan had pulled him back up and so that had convinced Palmer that Ryan didn’t really want to kill himself. If he did then he wouldn’t have cared if someone else had died as well. So Palmer kept Ryan talking. He had Ryan talk about his mother and how she died when he was twelve. And how Ryan’s dad had tried to act as two parents after that by both disciplining Ryan one second and then babying him the next.

So Palmer got Ryan to a point where he admitted that he did know his father had loved him, but the problem that Ryan truly had was that he didn’t know if his father had known how much Ryan had loved him back. Though Palmer had talked to Ryan about himself and he had told the other man what he had to face. Like how he had lost a child when the adoption fell through and had how Gibbs had been the only one that could console him. He said that Gibbs had lost more than other person he knew and he still was this pillar of strength that that they all could depend on.

Only Gibbs and the rest of the team had been listening in on the conversation and they had heard everything that Palmer had told Ryan. So they knew that Palmer firmly believed in opting for happiness and that he had passed the medical examiner test on his third try however he didn’t want to leave his job with all of his friends and so he hadn’t told anyone that he had passed the test. But Palmer had made Ryan realize that how you measure success could make all the difference and so that had told the guys back at the station what they needed to give Ryan to make him come inside.

The guys realized that they needed to give Ryan a purpose and so they had asked for his help. They had investigated his father’s case and his father hadn’t been run over by Commander Morgan. He had actually been run over by a road rager that had gotten upset earlier when the captain had cut him off at the intersection. So the guys went to the window and they told Ryan they needed his help as an eye-witness to put the man that killed his father behind bars and that had convinced him to come inside.

However, the guys had also given Ryan the captain’s wallet. They had wanted him to see that the captain had carried around a picture of the two of them on the day Ryan had finished his senior thesis and they also told him that his father had showed it off to everyone because he had been so proud of Ryan. So Ryan’s last memory of his father was going to be that picture and that was going to get him through his birthday yet at the end of it all everyone had just been so glad that both men were ok and Palmer had even gotten a hug from Gibbs.