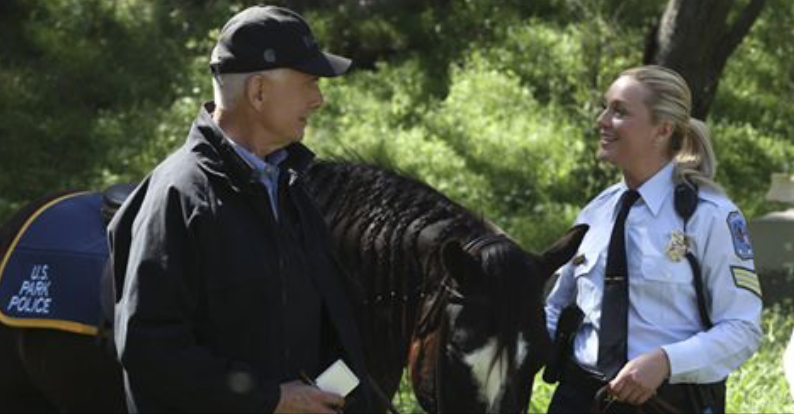 Tonight on CBS NCIS returns with an all new Sunday, May 2, 2017, season 8 episode 22 called, “Beastmaster” and we have your weekly NCIS recap below. On tonight’s NCIS episode, as per the CBS synopsis, “A Marine sergeant is murdered in a national park, and Gibbs and the NCIS team partner with mounted police to solve a string of related crimes in the park.”

Unfortunately, a body was found in Rock Creek Park. The Mounty Police had found the body of Marine Sergeant Tanner after a long night on duty and there had been something strange about the crime scene. The victim was technically murdered by a piece of an old structure that’s been in the mark for centuries and it was nearly impossible to move. But there was no doubt that the murder was suspicious. The Mounty that had been on duty that night had heard a struggle as well as the victim’s screams. So she knew that the death wasn’t ordinary and she wanted to help NCIS with their investigation.

NCIS was brought in because the victim had been military personnel. However, Mounty May Dawson felt attached to this case and she knew the park better than the federal agents. So she pointed out a few things they might have missed as they were going over the crime scene. She pointed out that there was blood on other forms of the same building that killed Tanner and that blood led them to finding several skulls that clearly belonged to animals yet there was some confusion. The skulls themselves were of rare monkeys found only in Africa and that begged the question of why their victim was in the park.

Or for that matter if the victim was truly a victim? Tanner after all could have been up to anything that late at night and so NCIS did investigate if their victim had been involved in any way of trafficking those skulls seeing as they did fetch a high price on the black market. Yet, that line of question was immediately put down because Tanner had been involved with an animal protection group that worked all over the world and his group in particular recently put away one of the biggest animal poachers there is. So Bishop and Quinn looked into a possibility that Tanner’s death was a reprisal thought they couldn’t get anything concrete.

The poacher he had put away was still in jail and, while he had the means to put a bounty on Tanner’s head, there wasn’t anything cropping up. Though there was another incident in the park. Another Mounty had been arresting some pothead when he heard a noise and tried to follow it, but he had gotten shot in the line of duty and the culprit had gotten away. So Gibbs teamed up with Mounty Dawson and together they tried to figure out what exactly was going on in the park for it to suddenly become a hotbed of crime. And it was as they were looking into the matter, that a foreign government demanded full knowledge of what happened to Tanner.

Tanner had apparently been working with foreign governments to help them train their own Mounties as well as protect their conservations. But an ambassador showing up in person and demanding to know every single detail of an American killed on American soil did send up some red flags. So Vance had tried to find out what was really behind the complaint however he had been fobbed off and nothing made sense until Gibbs and Dawson had a breakthrough. The two had found out about an old ranger’s lodge that had been abandoned and so they had gone there expecting to find the culprits. And what they found was bush meat.

Bush meat was an old Liberian custom in which people smoked the meat from the animals they hunted. However, it had been outlawed worldwide because of the risk it represents. The meat isn’t from domestic animals like chicken or goat and instead it was from monkeys and rare animals that possible carried diseases. So it could kill the people that eat and unfortunately the people that were selling didn’t appear to care about the risks yet Tanner’s cloud did help them clear up the part he played in it all because he had been recording these sellers in the park when they must have caught onto him and killed him to keep their enterprise a secret.

Yet, knowing the truth about why Tanner had been killed had made the Director call in the Liberian Ambassador for some answers. He figured the other man knew what was going on and had been trying to cover up what was happening in his country though the ambassador it seems had only wanted to protect his country. He said that it was hard enough fighting the image the rest of the world had for them that they couldn’t risk a bush meat ring being the start of new epidemic. So rather than continue to hide the problem, the ambassador chose to work with NCIS and had gone to traditional Liberian market nearby to see if anyone selling there.

Only if they were then they were doing their best to hide it because neither the ambassador or Reeves found anything. Though they did come across a disgruntled friend of Tanner’s who was trying to find evidence against the people that killed him. So Abby had had a lot of explaining to do because she was the one that revealed why Tanner died and, once she had apologized, Abby also told the team that there was a new crisis. She said that there had been an outbreak of Ebola from the same region that the meat came from and that the next shipment could very well be tainted. And so NCIS had had to stop the bush meat trafficking before they have Ebola outbreak in their own backyard.

So the team looked through all of Tanner’s photos and one photo especially had helped them figure out who was one of the men in the picture. But once they caught him at the same Liberian market, he spilled everything. He told them about their contacts at the airport and even sold out everyone that was in involved however the Liberian ambassador had still been worried about how it looked for his country and so Vance had agreed to a joint press conference so that no one could turn them against each other or create an issue between the states and Liberia.