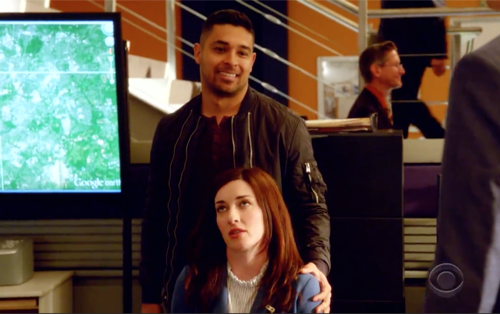 Tonight on CBS NCIS returns with an all new Tuesday, May 9, 2017, season 8 episode 23 called, “Something Blue” and we have your weekly NCIS recap below. On tonight’s NCIS episode, as per the CBS synopsis, “The stress of McGee and Delilah’s imminent wedding takes its toll, as Delilah is rushed to the hospital. Meanwhile, the NCIS team travels out to sea after a young and healthy petty officer aboard a Navy destroyer dies in his sleep.”

Navy Petty Officer Gregory Jones was young and reasonably healthy for his age if the slight high blood pressure was discounted. So all in all it had made little sense to anyone why he would suddenly drop dead while their ship was sea however the commander followed protocol. Jones was checked over by the doctor onboard and his body was moved to the freezer for preservation on tonight’s episode of “NCIS”. But there was later a complication when Gibbs and Palmer came onboard to investigate his death because someone had broken into the freezer and had removed the body without anyone seeing or hearing a thing.

However, a body doesn’t just randomly disappear because that wasn’t a thing! There simply had to be evidence of where the body was moved and so Gibbs called in the rest of the team to help investigate the matter yet they found nothing. Quinn, McGee, Bishop, and Torres all flew out to the USS McGuire and took pictures of the scene as well as interviewed all those that were supposedly close to Jones and they got nothing. There was no one on the ship that seemed to have a problem with Jones and he was considered to be a promising young officer. And therefore, the team left the ship with not much to go on and that proved to be hard for Jones’s family.

Jones’s sister was called in and she had been notified about her brother. Yet, she too was both upset and confused about his body disappearing into thin air because it just didn’t make sense and unfortunately NCIS couldn’t tell her everything. All they could say was that they were looking for Jones’s remains and, while they were talking, Torres also asked the sister if her brother experienced any problems onboard. So she told him about the last conversation she had with Jones. He had sort called her out of the blue and she could hear something was wrong in his voice though she admitted that she didn’t have time to ask and so all got was a name.

The sister said Jones was having problems with a fellow Petty Officer by the name of Herring. Herring as it turns out was hazing Jones with a few others and he said that they never went too far or crossed the line. Though both Bishop and Gibbs told him that Jones wouldn’t have said anything to his sister about it if he had been ok with what was happening. So NCIS carefully looked into what exactly going on and, while it was horrible, they didn’t really find a motive for murder, but Jones’s body did later reappear. It had washed up onshore and the Coast Guard found it so those guys helped to ensure was imminently taken to the lab. And that no evidence was lost.

But what Palmer and Ducky found in Jones’s autopsy didn’t make sense. He was apparently high on drugs the night he died and that didn’t sound like the man Jones was however the autopsy did make it clear that whatever drug he took was in his food. So Gibbs tried talking to the commander to find out if anyone would have drugged Jones and it turns out he had gotten the situation wrong. No one had tried to drug Jones because Jones’s plate was originally meant for the commander. The commander had gone down to the mess hall to eat with everyone else and he just wasn’t hungry enough to eat anything so he had passed his dish to Jones.

So Gibbs quickly caught on that the drugs were for the commander and he had asked the other man if he had any enemies on board. However, the commander wasn’t sure if he did. He said he led over two hundred men and women and that no one jumped out as a suspect though fortunately Gibbs found a way to make finding a suspect easy. It had the whole crew of the ship go into the common areas while their bunkers were checked one by one by his team. And so drugs were found. They were just found in Herring’s bed and Gibbs thought that sounded off because everything about the plan to kill the commander had been carefully planned while the drugs being found so soon was messy.

Gibbs figured no one go to such lengths just to slack off as they were getting away with the crime. So the guys went to investigate the drugs themselves. The drugs were called Blue Burgers and there was one person in Norfolk selling it in the area. Though McGee couldn’t go. His fiancée Delilah passed out and so he had been at the hospital with her when they learned the good news. Delilah was pregnant and the doctor thought she needed to be careful because she was slightly anemic. And so the happy couple were excited about their news and they made the mistake of telling Abby. Abby had promised she wouldn’t say anything and then she blew it later on.

She had kind of told everyone at the office and so the team was happy for McGee. Yet, before the team could celebrate the news with the couple, they wrapped up their case. They had found the drug dealer and he had identified a friend of Jones’s. So it hadn’t taken Gibbs a lot of time to crack their suspect because he had already felt bad enough that his plan to kill the commander had ended up targeting a friend, but he admitted that he also planted the drugs in Herring’s room and that he was just covering up what he had done once he saw that Jones had died instead of his intended target.

And so one mistake changed everything and if Jones hadn’t taken the plate then the plan would have worked without anyone suspecting a commander in his fifties suddenly dying was suspicious. But luckily the team had finished with the case just in time to attend McGee and Delilah’s surprise wedding that they had moved up because their baby had changed their plans. So Gibbs acted as Delilah’s man of honor and he had even given McGee his father’s old watch because it was a wedding tradition to pass it on to the groom.