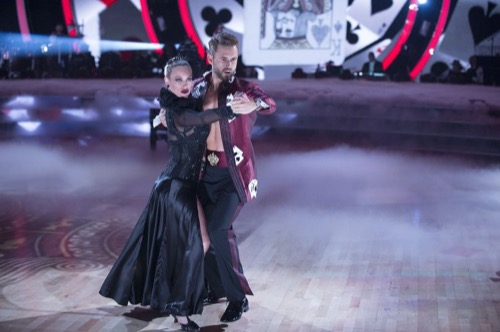 Tonight on ABC the glitz and the glamor returns to the ballroom as Dancing With The Stars returns for the fourth episode of season 24 and it is Most Memorable Year Night. Former The Bachelor Nick Viall and his professional dancer Peta Murgatroyd took the DWTS stage tonight and danced the Rumba to “Shape of You” by Ed Sheeran.

On tonight’s episode, the 10 remaining celebrities will take a stroll down memory lane and celebrate with a dance to a time in their lives that left a lasting impression, as they commemorate their most memorable year. At the end of the night, based on scores and votes from last Monday, one couple will be eliminated.

Judges Comments: Len: I’ve seen you with your shirt off now and we’ve got something in common. It was your best dance so far, well done. Julianne: Peta, you’re really smart. Nick, you look really comfortable with a lot of women. This was your best dance. Bruno: I felt something new stirring inside you tonight. That’s the way to go! Carrie Ann: I thought the beginning was a bit rough, but in a weird way you claim it. But, the dance became magical. Great choreography.