BY Sarah Luoma on March 12, 2017 | Comments: Leave Comments
Related : Once Upon A Time, Recap, Television, TV 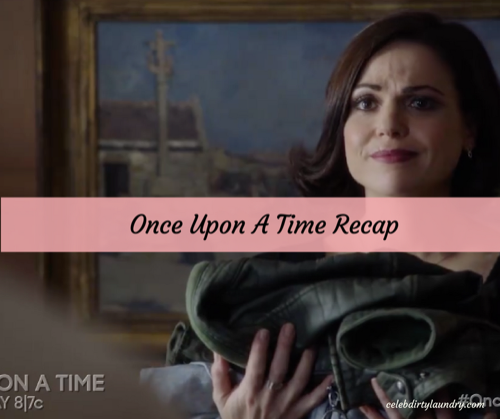 Tonight on ABC their popular fantasy drama Once Upon A Time returns for an all-new Sunday, March 12, 2017, episode and we have your Once Upon A Time recap below. On tonight’s OUAT season 6 episode 12 “Murder Most Foul”  as per the ABC synopsis, “David (Josh Dallas) searches for the truth about his father’s death, and he seeks Hook’s (Colin O’Donoghue) help in this endeavor. Meanwhile, Regina (Lana Parrilla) assists Robin in acclimating to life in Storybrooke, but she soon discovers he has a dark side, which complicates this transition.”

A man comes home to his tiny cabin in a rainstorm. He couldn’t get his babies any medicine. His wife is panicked. Rumpelstiltskin comes out of now where. He can help – for a son. David or James will go to the king. Prince James it is. The deal must stay secret.

David makes a toast to family with the gang, celebrating Emma’s win against Gideon. She is going to break this curse. David goes outside. He sees his father on the walk, reaching for him. David falls to the ground. He finds a coin after coming to.

Regina brings Robin clean clothes. Mary wants to know why Regina let Robin come back. She doesn’t know him. It could be dangerous. Mary is worried.

Hook is talking to his therapist friend. He is going to ask Emma to marry him. He has to get her father’s blessing. He isn’t sure what David thinks of him.

Mary sends David a video message. She misses him. He misses her too. A figure alerts him. He sees his father. What is e doing there? His father is back because he has forgotten him. And he wants the truth. David looks confused.

In the tavern, David’s father is drinking. King George arrives. They all rise. Prince James has been abducted.  He is offering a reward. His dad is going to get him back. He packs to hit the road. He wants to fix his family. David asks him where he is going. Will he be better when he comes back? David gives him his lucky coin for luck.

David let’s Hook in. He needs him to look at a map with notes. He needs his help. He saw his father’s ghost. He needs a pirate.

Regina explains to Robin who lives in Storybrooke. Zelena is at the door. She wants to see Robin. He wants to tell him about his daughter. Regina wants her to go home. Regina returns to the living room. Robin is gone, to Nottingham.

Robin has located the sheriff in downtown Storybrooke. He shoots an arrow at him. Regina comes running to stop Robin from doing something he would regret. Regina makes him promise to stop running away and attempting to kill people.

David and Hook are at Emma’s. She is gone. David needs spell books and supplies. Hook has the key to the shed. He will keep watch.

James’ father visits Rumple. He wants his help finding his son – he owes him. Rumple wants one hair off of his head to help. He uses his magic globe. James ran away to a scary place. James’ father heads there.

David searches for supplies while Hook watches. Emma shows up. She forgot something. He needs to kiss her. She sees he is trying to stall for some reason. He tells her he is out of sorts. He talked to Archie. He thought she was going to die. They kiss. David makes it out of the shed without her knowing.

Regina needs to talk with Robin. She has changed. She tells him the other Robin had a child, two actually. The daughter is here. Her sister is the mother. It’s complicated. She wants to be a part of a fresh start. They kiss. She is going to show him more of the town.

David is cooking up a spell. Hook watches. They gag on the fumes. It’s working. David uses the coin with a map. He is in a terrible dark place. It’s a circus with people everywhere, drinking and eating. James’ father runs into Pinocchio. He questions him, he lies as his nose grows. He knows where James is.

He finds James and takes him home. David realizes that his dad was trying to fix their family. He was sober. David knows who killed his dad. Hook doesn’t want him to go. David handcuffs Hook to a bike rack and takes off.

King George is waiting outside of the circus. He sees James and his father. He wants to take his son home. He won’t give him back to the king. The king orders James’ father to be killed.

James and David’s father is tied to a wagon wheel while the King’s men try to set things up to make it look like an accident.

David throws the coin into the water. Hook asks him if he is okay. I think so, he replies. David apologizes to Hook for making him risk what he has with Emma. He thanks him for stopping him from making a terrible mistake. Hook asks for his blessing to marry Emma. Of course, he responds.

Mary and Regina talk about Robin. She kissed him and there was nothing. Mary was right. Regina just wanted to believe. Why didn’t he make it through the portal? Who is and what does he want?

Hook stabs the king’s men and then kills David and James’ father!