BY Sarah Luoma on March 19, 2017 | Comments: Leave Comments
Related : Once Upon A Time, Television, TV 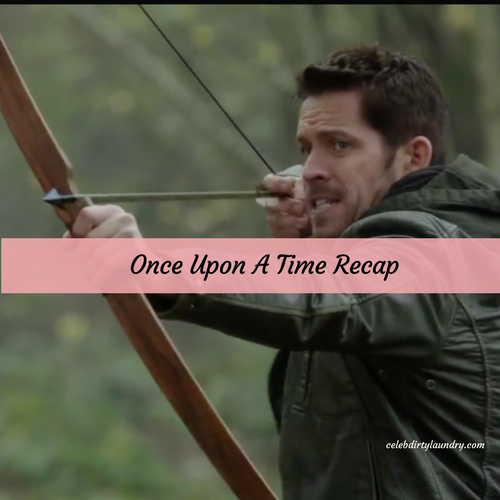 Tonight on ABC their popular fantasy drama Once Upon A Time returns for an all-new Sunday, March 19, 2017, episode and we have your Once Upon A Time recap below. On tonight’s OUAT season 6 episode 13 “Ill-Boding Patterns”  as per the ABC synopsis, “Gideon (Giles Matthey) resumes his mission to kill Emma, (Jennifer Morrison) so Gold (Robert Carlyle) takes steps to protect Gideon from the taint of dark magic. Meanwhile, Robin forms a questionable alliance; Emma learns Hook’s been keeping a secret; and in a flashback, Beowulf goes after Rumplestiltskin.”

The First Ogres War – Blacksmith’s work by firelight while others catapult fireballs into the air. One soldier can’t do it. He is afraid of the ogres. He tries to run. One soldier carries a magical blade. He tells him not to be a coward. The soldier is tells him to hang in there. They all charge. An ogre comes out of the woods. He swipes his sword back and forth, taking out a few soldiers. The soldier with the magical sword takes him down. The scared soldier gets squashed by another ogre. Moments later, the magical soldier is the only one alive. An ogre comes for him. Rumple jumps in out of nowhere and kills the ogre.

Hook is drinking rum. Its early. Cricket arrives. They talk about his proposal to Emma and something he has learned about his past. A secret he could take to his grave, but he wants to tell her the truth. Cricket tells him to do it.

They search for Gideon. But no luck.

Rumple is being celebrated at the tavern for killing the ogres. The surviving soldier arrives. He wants to know how Rumple could kill all of the ogres. Rumple’s son tells him to get rid of the dagger and his magic. Rumple agrees – no more magic.

Gideon is at the sheriff’s office. He steals back the handle of his sword. His father shows up. He warns him that he shouldn’t be there. He puts a spell on him – making his drop to the ground. There us a few things he needs to teach him.

Regina spots Robin in the woods. He pulls his bow and arrow on her until he sees who she is. She apologizes for pressuring him. He is having trouble adjusting to this world. She offers her help. He will meet her on her manse tonight. He just needs time to clear his head.

Gideon has been tied up in the clock tower by his father. He explains that the darkness is dangerous and the useless relic he has is nothing. Giving into darkness will only lead to heartbreak.

Rumple’s son comes home. He is dirty. Baker’s son did it to him because of Rumple. The townspeople come knocking. There is a Grendel and they need Rumple’s help. His son tells him to help them without his magic.

Robin shows up at Regina’s sister’s house. He wants her help getting out of Storybrooke.

Rumple and his son head into the woods to find the Grendel. Rumple wants to cross the river without magic. He is worried if he carries the sword, it will control him. He hands it to his son.

Gideon has saved the book his mother gave him – The Handsome Hero. He kept the book and read it at night when he was held by the black fairy. She took a boy and he didn’t stop her. He was a coward. He cries. His father gives him a memory potion. He hugs his father before turning the knife on him. He is going to help him fulfill his destiny.

Rumple and his son walk together while his son holds to sword. They hear the Grendel. Rumple finds a horn, an ogre’s call. The surviving sword comes out of nowhere. He is the monster. There is no Grendel. The soldier wants to be the hero he thinks he should be. The hero who defeated the dark one.

Gideon looks through the store’s book. He needs to fix his word so that he can kill the savior. His father tells him he will never get the blood he needs to fix it – blood from the blue fairy. Gideon will take the risk. He commands that his father will not stop him.

Robin is at the town line of Storybrooke. Regina’s sister shows up. She has brought her things with her and she is ready to go. She brought the potion they need. Regina shows up. She noticed her magic was missing. She confronts Robin. He tells Regina he tried in Storybrooke but she made it hard. He can’t live up to the legacy of the man that died for her. Regina’s sister tries to get out. She can’t break the spell. Regina tells Robin she will help him leave if he really wants to.

The surviving soldier Beowulf is in the woods. Rumple’s son pulls out the dagger. The man threatens him. Rumple intervenes, using his magic to throw the man against a tree. The man tells Rumple that the village is afraid of him. Rumple commands his father to kill and he does.

Gideon finds his fairy godmother. She apologizes for not protecting him from the black fairy. He wants her magic. He attempts to take it. His father shows up. He will not let his second son lose out to the darkness. He will extract her magic for Gideon. He does. Gideon’s godmother drops to the ground. They will defeat the black fairy together.

Rumple asks his son what he is going to do with the dagger. His son Bae doesn’t want to give up the power. Rumple gives him tea. Its memory potion. He won’t let him fall into the darkness. Bae has no idea what happened. Rumple tells him he killed Beowulf.

Bell arrives to find Gideon’s godmother laying on a cot. She is upset, but happy that Gideon didn’t do it. That they will take on the burden for their son.

Hook is still drinking. He is torn. He goes to Emma’s. She tells him that her answer is yes. But she asks that he propose again. No walls, no secrets. Hook asks her, not telling her the truth. She says yes.

Regina’s sister shows up to apologize. Regina thinks she failed at moving forward. She thought she was rid of Quenny, but she is going to pay the price for what she did. When she goes to see Queeny in her cage, they both realize she is gone. Robin has her! She turns from a snake to the Evil Regina.