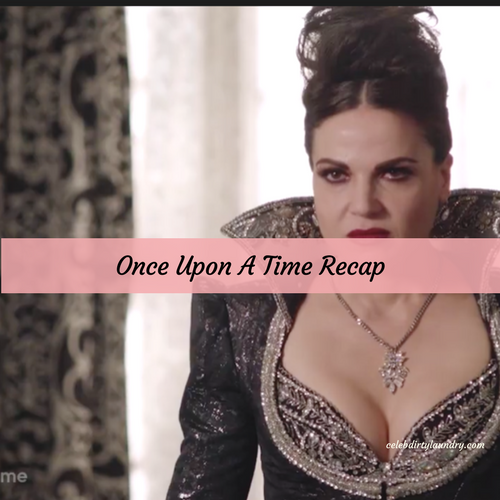 Tonight on ABC their popular fantasy drama Once Upon A Time returns for an all-new Sunday, March 26, 2017, episode and we have your Once Upon A Time recap below. On tonight’s OUAT season 6 episode 14 “Page 23”  as per the ABC synopsis, “The Evil Queen sets out to eliminate Regina, using Robin to bait the trap. Meanwhile, Hook seeks advice from his old pal Captain Nemo, but Gideon torpedoes his plan; and in a flashback, the Evil Queen learns a lesson about the true source of her misery.”

The Evil Queen and her guards think they have captured Snow White but she escapes. Tinkerbell confronts her and tries to get her to soften her heart but the Queen refuses. She claims to be happy but Tinkerbell thinks she is just afraid of love because she doesn’t think deserve it. The Queen spares Tinkerbell to prove to the villagers that she is a caring Queen. Robin Hood doesn’t understand why the Queen wants his help. She wants him to steal something for her and tells him to start digging in the cemetery.

Emma proudly shows off her engagement ring but her happiness is lessened with the news that the Evil Queen has escaped. Robin finds a pair of scissors and the Queen says she can use them to destroy Snow White.

Nemo and Hook meet on the dock and Nemo says he and his crew are heading out. Hook asks for advice because he has hurt the family of the woman he loves and once they find out he is afraid he will lose her. Nemo says he must beg for forgiveness.

The Queen confronts Henry and he points out that she got her revenge on Snow White and she is still not happy. The Queen’s father shares her mother’s spell book with the Queen. The Queen is set on killing Snow White.

Robin is tied up by the Queen and she plans to use him to lure Regina into her trap. Regina’s father encourages her to find the man with the lion tattoo because he thinks this will finally bring her happiness but she just gets angry at him. Hook relives killing David’s father and Emma realizes he did it. She is angry that he didn’t come to her and tells him there is nothing they can’t conquer together. She gives him back his ring and says until he is ready for that kind of relationship she can’t marry him.

Hook goes to say goodbye to Nemo and admits he didn’t take his advice and asks if he can join his crew. Nemo says they leave at 4. The Queen uses her mother’s spell book to try to find the person she hates most, Snow White. But the spell leads her to look at herself in the mirror.

The Evil Queen uses the scissors Robin found to cut her ties with Regina. They then battle it out with swords. Regina wins the battle but can’t kill the Queen. She says she will choose love over hate. She shares some of Henry and Robin’s love with her and they hug. They talk and realize that Tinkerbell was wrong. Robin was not Regina’s happy ending. Regina asks Henry to write the Queen into a new place where she can be happy. The Queen apologizes to Snow White and to Henry. He writes that the Evil Queen went to a place that she could get a fresh start and she is gone.

She arrives at the tavern door and enters to find Robin. She offers to buy him a drink but he says he will buy her one instead and they toast. Snow White finds Hook to let him know that Regina vanquished the Evil Queen and gave her a happy ending. She reminds him that love can save even the darkest souls you just have to believe in it.

Emma returns home to see that Hook is gone. Hook tells Nemo he has decided to stop running and that he plans to return to Emma. Just then the ship begins to submerge and Gideon appears to tell Hook for what he has planned Hook can’t be in Storybrooke.