BY Annemarie LeBlanc on April 30, 2017 | Comments: Leave Comments
Related : Once Upon A Time, Recap, Television, TV 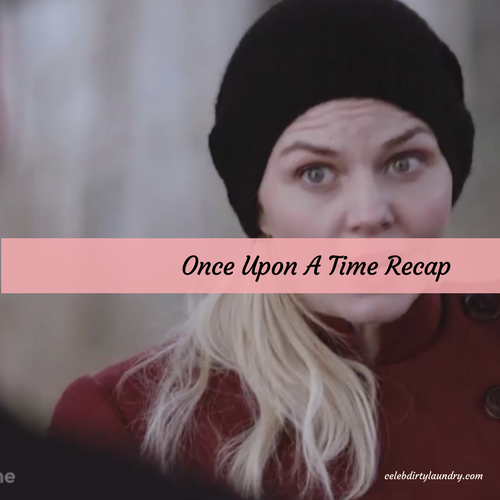 Tonight on ABC their popular fantasy drama Once Upon A Time returns for an all-new Sunday, April 30, 2017, episode and we have your Once Upon A Time recap below. On tonight’s OUAT season 6 episode 19 “The Black Fairy”  as per the ABC synopsis, “A flashback about Fiona and Rumple’s fairy godmother reveals Rumple’s destiny was prophesied, and Fiona did everything in her power to keep it from happening. Meanwhile, in Storybrooke, Rumple faces a dilemma similar to one his mother once faced.”

The show begins many years ago as Fiona gives birth to a baby boy. Tiger Lily arrives as the baby’s fairy godmother and tells Fiona the baby is the savior. In really time Rumple works to wake up Blue but isn’t successful. He gets anger but Belle comforts him. Blue starts to wake up and Hook immediately asks if she knows where the other half of the wand is. She starts to tell them that it is in Storybrooke but then the Black Fairy appears and starts to choke Blue before she can finish her sentence. The Black Fairy and Blue disappear. Rumple tells his son it is time they get his heart back.

Regina offers to help Zelena put together her daughter’s baby bed. Rumple and Bell beg Gideon to tell him where the Black fairy has hidden his heart but he won’t help. Rumple uses the Sand of Morpheus to take he, Swann and Gideon to the dream realm. They walk in the dream realm and come to the house Rumple was born in. They realize it is Rumple’s dream not Gideon’s. Tiger Lily appears and Fiona tells her she hasn’t been able to sleep or eat since she found out Rumple is the savior. Now she knows a great evil will come for her son and in a great battle he will be killed. Tiger Lily says it is her job to protect him and Fiona’s job is to raise him.

Fiona steals Tiger Lily’s wand and says a spell to turn herself into a fairy so that she can protect Rumple. In real time Regina teaches Zelana how to drive but it doesn’t go well. Regina asks Zelena to promise that when the final comes she has to promise to take Henry to New York to keep him safe. Snow calls Regina from the clock tower in Storybroke asking for guidance in finding the other half of the wand. She tells them they need to go to granny’s house.

The Black Fairy tells Blue if she doesn’t tell her where the wand is she will be sorry. Time switches back and Fiona and Tiger Lily check all the new born babies looking for one with a crescent shaped birth mark as that is the baby that will ultimate battle and kill Rumple. When they aren’t successful Fiona begs Tiger Lily to help her create a new spell to save Rumple.

Rumple tells Swann who hard it was for him to be back in his old house as his mother never loved him and never did anything for him. She didn’t even give him a name. He will be very happy when they defeat her once and for all. They find Gideon and he thanks his father for fighting for him. But he doesn’t know where his heart is. While they won’t find his heart Rumple will learn his mother’s darkest secret, which they can use to defeat her.

Regina and Hook tear granny’s apart looking for the wand and find it under the Juke box. Just then the Black Fairy shows up and challenges Regina to a fight. Rumple finds his baby blanket and Swan encourages him to face his memories and figure out why his mother gave him up. He remembers his mother singing to him in the secret vault of the fairies. She and Tiger Lily are working on the spell but Tiger Lily realizes she isn’t working on a spell she is working on a curse. Fiona says the curse is the only thing that will protect Rumple.

Fiona pulls Tiger Lily’s heart out of her chest and at that moment turns into the Black Fairy. A crescent appears on her wrist and she realizes that she and her son are destiny to kill each other she is the threat to her son. Swan, Gideon, and Rumple watch this scene in horror.

Just then the all wake-up and came out of the dream realm. Rumple takes the other half of the wand and goes to find his mother.

Rumple returns and tells everyone he defeated his mother and gives Gideon a heart. Belle is so grateful he saved their family. Hook asks Henry to help him with his most important mission … operation best man. Swan and Hook kiss and say goodbye until their wedding tomorrow. Gideon meets with the Black Fairy and she asks if everyone believed him. He says Of course. THE END