BY Sarah Luoma on April 9, 2017 | Comments: Leave Comments
Related : Once Upon A Time, Recap, Television, TV 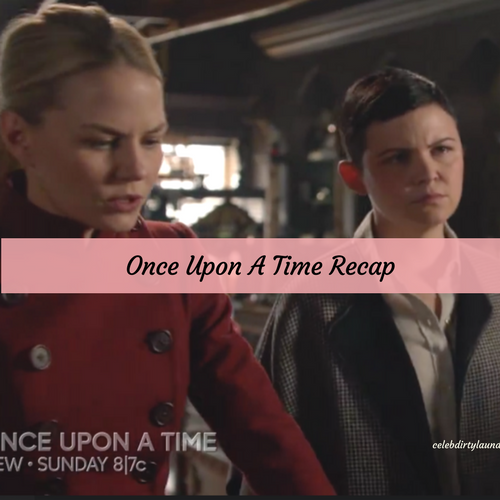 Tonight on ABC their popular fantasy drama Once Upon A Time returns for an all-new Sunday, April 9, 2017, episode and we have your Once Upon A Time recap below. On tonight’s OUAT season 6 episode 16 “Mother’s Little Helper”  as per the ABC synopsis, “Gold and Belle convince Emma to help Gideon stop the Black Fairy. Meanwhile, Regina (Lana Parrilla) seeks counsel from the previous Author when Henry’s powers go haywire; Hook (Colin O’Donoghue) bets a prized possession on a game of cards; and in a flashback, young Gideon is tortured by the Black Fairy.”

Baby Gideon is in a basket being carried by the black fairy into the mines. He isn’t mine material, he is precious, she explains to a woman in the mines. The black fairy takes the book from his basket.

Emma and Gideon are in a dispute in her home. She demands he bring Hook back. He isn’t scared of her. He’s been through life with the black fairy. Unless she helps him with his mission, she won’t see Hook again.

A young Gideon reads through his cell to another boy from his book. The black fairy comes in. She finds his book. She is angry. He tells her that it is his, from his real mom. She tells him that she is his real mother. She is going to teach him a lesson by taking the other boy away. She tells Gideon he isn’t a hero but a coward.

Emma and Snow enter Gideon’s parent’s shop. She tells them what Gideon is up to. Gideon’s father tells them that the Black Fairy is his mother. They all have to work to stop her. She will bring far worse if they don’t.

Regina is trying to cast a sleeping curse. She has cleaned up most of her evil spells, undoing everything, except for this big one. She asks her son Henry to go and get more ingredients from Emma. He begins writing the list and is suddenly possessed by something.

The black fairy calls Gideon. She tells him it is his birthday today. He is 28. She is proud of him. She wants to celebrate. She realizes that the key to her vault is missing. She wants Gideon to make whomever stole it pay.

Emma pays a visit to Gideon to the clock tower. She is willing to help him. She needs a sign of good faith first. He hands over his sword. They have a deal.

Hook enters the tavern. He dumps a bag of jewels on the table in front of Black Beard. He needs a favor. He is willing to play a round of cards for his ship.

Emma and Gideon arrive at the sorcerer’s mansion. He wants to create a porthole. Before they can start the spell, a large creature comes out of the door. The Black fairy knows what they are doing and she is sending a message.

Gideon arrives in the mines. He asks all of the kids to gather around. He wants the key back or he will turn them into vermin. The young boy who Gideon read to, who is now grown, steps forward. He stole the kid. He asks Gideon to help him defeat the fairy.

In the sorcerer’s mansion, Gideon and Emma watch as the large spider spins webs.

Hook loses. He takes Black Board outside to see the ship. It isn’t there. Hook tricked him. It’s in another realm.

Henry comes to. Regina asks him to explain what he wrote in the book. He doesn’t know. She takes him to see Isaac.

Isaac looks over what Henry wrote. He will tell Regina what it all means but he needs out of jail and he needs a sports car. He also wants to live in the big apple and he needs Hamilton tickets. Regina has had enough. She goes to live. Isaac finally gives, Henry is going to have more trances. His power is taking over.

Gideon’s cries when he learns of what his friend endured. Gideon apologizes for being weak. The boy knows how to take the fairy down – the savior. He asks Gideon for help contacting her.

In the mansion, Gideon and Emma try to escape. Gideon pushes Emma into a web and takes his sword back. He tricked her. He disappears while the spider tries to get at her.

Hook and Black Beard arrive in the wrong realm. The magic bean brought them to the wrong place. They hear yipping in the distance. It’s the lost boys, they are in Neverland.

Gideon goes back to the clock tower while Emma tries to save herself. She fights the spider who spins her in its web. Gideon wields the sword filled with power. He slashes the air. Gideon’s father saves Emma, breaking Gideon’s power source with the sword. Emma tells him what his son has done.

Gideon finds the source they will use to contact the savior. The black fairy comes in. The key missing was all a test. Now she knows what he is really made of. She turns Gideon’s friend into a bug and stops him to death. Gideon calls her a monster. He is going to find the savior. The fairy has plans for the savior. She isn’t threatened.

Hook and Black Beard run through the woods from the lost boys. They see the shore. There is a boat. Black beard hits Hook from behind. He runs to the boat, leaving Hook. He starts to run as the lost boys chase him.

Gideon’s parents, Snow and Emma meet. They defend Gideon, but Emma says otherwise. They get upset that she is threatening their son. They threaten her back. Snow steps in, reminding them who started the fight. Emma and Snow leave. His parents talk. His father thinks they can save him. His mother isn’t so positive.

The black fairy arrives at the clock tower surprising Gideon. She managed to get through the porthole while Emma was wrapped up, close to death.

Regina and Henry get Isaac free. He tells them that he need to look at Henry’s book, the final chapter when the savior fights the fairy!