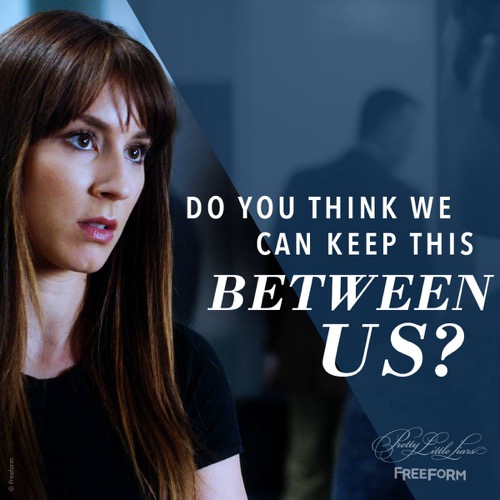 Pretty Little Liars returns to Freeform tonight with an all new Tuesday, May 30, season 7 episode 16 called “The Glove That Rocks the Cradle” and we have your Pretty Little Liars recap below. On tonight’s Pretty Little Liars Season 7 Episode 16 as per the Freeform synopsis, “Det. Furey closes in on uncovering what happened to Archer Dunhill; the Liars team up to protect one of their own; Hanna struggles with the idea that Lucas might be connected to A.D.”

Spencer is being questioned about the Radley Hotel and a joke she made to Fury about burying a body. Fury comes in. He can’t help her unless she tells him the truth. She asks to go home. Emily covers Ally’s eyes and brings her into a nursery she created for the baby. Ally thinks it is great.

Ezra brings Aria a pamphlet for ball room dancing. He wants them to look good at their wedding. She can’t commit to a time. She gets a text and leaves.

Spencer tells the girls that Fury has something on her. Her credit card slip from the Radley Hotel. Spencer admits that she was drunk. Emily knows where all the paperwork is. Hanna can steal the slip during the employee’s weekly meeting.

The girls are plotting on how to get the slip from the Radley Hotel when the game interrupts them. AD wants something from the computer shop.

Hanna fights with Caleb. He doesn’t want her to go alone. She owes Spencer. She needs to do this for her.

Emily and Spencer build the baby’s crib together. Spencer wants to get Fury alone to get him to help her. He cares about her. Em tells her not to be so confident. Spencer asks Em what she is doing with Ally. EM doesn’t want to be judged.

Aria comes home to see Ezra. He tells her that his agent wants him to do his press tour alone. He is mad. She tells him to do it. It will help them build a future together.

Hanna and Caleb bring the video home and open it. It’s a Patsy Kline song. Hanna knows it means something. She just doesn’t know what.

Spencer goes to Fury’s apartment. She tells him that she is the same person he liked days before. She wants him to stop being a cop for a minute. Can’t he just let this go? He tells her she needs to go. He leaves the room to take a call. She steals some zip drives off of his side table.

The girls play the zip drives with interviews of Lucas. Hanna doesn’t believe that Lucas would throw her under the bus. All of the girls think Hanna is crazy, but she knows that he wouldn’t hurt her. Aria disagrees.

Em gets mad at Ally that she isn’t eating healthy and taking her vitamins. Ally leaves after taking the vitamins, leaving EM standing there.

The girls and Caleb all meet. They are going to wait at the school to see who picks up the hard drive at the school locker. Aria needs to go to Ezra’s press event. Hanna heads to leave when Mona shows up. She wants to help with the game. Hanna tells her that the others don’t know. And she can’t tell them.

Hanna drops off the hard drive in the school’s locker in the dark. Meanwhile, Aria is at Emily’s and Ally’s in a black hoodie, taking down the baby’s crib mobile that was once Emily’s!

Someone rushes by Ally in the hall of the school as her and Emily hide out to see who goes to the locker for the hard drive. She falls when someone she didn’t see rushes by her. Emily takes her home. Aria is still in the house when they come in. She can’t get out. She is bumping into things. Emily and Ally hear something. Emily picks up a heavy candle stick. She heads upstairs. A door is ajar and no one is around. Aria got out without them seeing her.

Ezra gives his interview. The crowd asks questions about his journey with Nicole. He admits that he is going to marry Aria.

Meanwhile, all of the girls are in the nursery. Aria is there too. They talk about who could have done this. Emily is sad and scared. Spencer finds an earring on the rug. It’s Aria’s. She pretends to have dropped it when they all entered the room. Hanna is ripping through the hotel files. She is running out of time. Caleb throws the paperwork on the floor and hits a water pipe to ruin the receipts. They leave quickly and head to another room to access the computers and cameras.

Spencer is watching TV when Fury calls. He knows that she stole his thumb drive. He is going to send an officer to get it. She reminds him that she was alone in his apartment. He hangs up.

The girls track down Lucas to ask him why he took his alibi back and why he ruined the nursery. He tells them that it wasn’t him. He was sent a comic and a threatening note. He is wrapped up in this this too. Lucas has a drink with Hanna and goes to leave. She tells him that she believes him. She asks him why the factory is for sale. Was their business together real? He admits that he was the only investor and that he had a hard time getting anyone else to back her. He did it all for her. He didn’t want to lose her.

Fury comes into the interrogation room to interview Spencer for the 2nd time. He tells her that the Radley Hotel was flooded. He plans to broaden his scope of the homicide.

Emily and Ally talk about the night. They kiss. Aria goes home and cries alone. A mysterious figure is drawing a tree in a comic book with a gravestone.