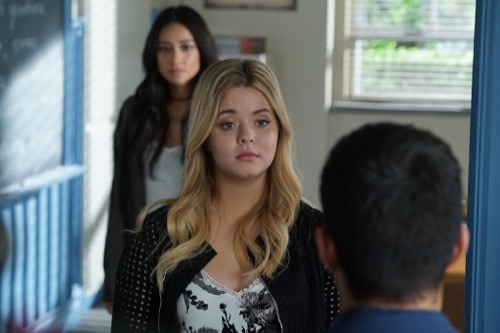 Aria is waiting in the kitchen. Ezra shows up. She tells him Nicole is upstairs. She gets up to leave. He tells her not to go. She is tired. Aria tells him that Nicole is going to have questions in the morning. Aria goes to Aly’s. The two talk before realizing that the game board is in the living room. They open it. The players are all shaking. Aly calls Spencer. She wants to know when Spencer brought the game to her house. She didn’t.

Em stayed the night at Hanna’s. She tells Hanna not to freak out about things she can’t control. Em heads to work at the school. Paige tells Em she received a job offer out of state and would be stupid if she didn’t take it.

Spencer opens the door to her mom’s. Her father is home. She asks her dad why he didn’t come home right away. He tells her that he was looking for Mary. He loves her, she is their daughter. They don’t regret a thing. He never found Mary, not yet.

Aly tells Em that she plans to terminate her pregnancy. Em offers to take her to the clinic. Detective Fury knocks on the door, interrupting the two.

Ezra and Aria talk at the coffee shop about Nicole and her mental health problems. She finally knows about Ezra and Aria’s relationship. He wants them to go back to being a normal couple.

Fury tells Aly he was sent a finger. It’s Archer’s. He wants Aly’s help with the investigation. She tells Fury he was con artist. Fury wonders if Mary could be behind it.

The girls are all together trying to figure out what to do next. The game board dings. The game calls on alley. It’s her turn to solve a puzzle or whoever is behind it Will tell the cops what they’ve done. Hannah wants to know why Spencer decided to sleep with Fury. Spencer tells Hannah how her father is searching for Mary. Hannah thinks they should look for Mary to find out who the second shooter is.

Aria comes home to find Ezra on the floor picking up pages of his book. Nicole threw it at her parents when they arrived at the house to pick up. Nicole has written her own notes on the pages about memories her and Ezra shared.

Emily runs into Paige at the school. Paige tells her that she is going to take the job. Emily wishes they could have started a new relationship but Paige feels stuck. She doesn’t want to feel like the old days she knows that Emily and Ally are keeping secrets.

Ally tells Aria that she is going to the clinic after school. The two talk about Ezra and Nicole. Ally hangs up on her, she is feeling sick. Aria gets an incoming video, threatening her. The person in the video tells her that Ezra would choose Nicole if she knew what Aria has done.

Paige sees a flyer for abortion hanging out of Ally’s purse in the teacher’s lounge. Ally catches her and rips it out of her hand.

Hanna and Spencer go searching for Mary. They knock on a door. It’s the home of Ted, a man Hanna knows. She makes plans to meet up with him again for coffee with her mother. The girls leave. Mary  comes out from behind him in the doorway. Ted asks her why she is here.

AB wants Ally to go into a baby store. Aria gets another threatening message. Ally walks through the store. Ally’s mission is to select 10 items for her baby.

The lady at the store gives Ally a necklace with the name, Emily, of her egg donor. Ally gets faint. She begs the woman for the puzzle piece. She has no idea what she is talking about. Ally finds it on the way out of the store.

Aria gets to her location instructed to her through text. She arrives to find a limo. She gets in and discovers a woman hooded inside. It’s Sydney. She wants Aria’s help.

Hanna meets up with Ted. He tells her that he has seen Mary.

Sydney tells her that she has a long way to earn their trust before they will let her out of the game. Aria is told to get out on a dark road.

Ted tells Hanna he has known Mary for a long time. Mary confessed to having Ted’s baby. He had no idea about Charles.

Spencer comes home to see her father waiting. He knows that she was out looking for Mary. He warns her to stop. Spencer demands the truth about Mary from him. He tells her that he saw Mary when Spencer came back from rehab. She was in there house in the middle of the night looking for revenge. Mary used his pills to kill her own twin sister.

Ally calls the wellness center to cancel her appointment. Ally and Em need more time to think. The girls all get together. Aria shows up late. They ask her where he has been and why she abandon Ally. They update Aria about what has happened to Ally and Em. Spencer tells them they all need to stick together. The game signals them. Its Hanna’s turn again.