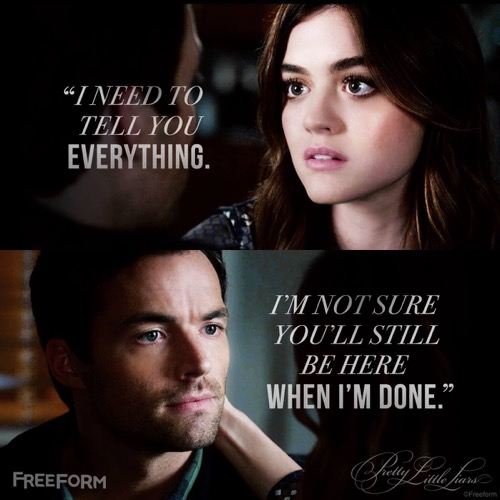 Pretty Little Liars returns to Freeform tonight with an all new Tuesday, June 20, season 7 episode 19 called “Farewell, My Lovely” and we have your Pretty Little Liars recap below. On tonight’s Pretty Little Liars Season 7 Episode 19 as per the Freeform synopsis, “The Liars are convinced they know A.D.’s identity and gear up for a confrontation. Meanwhile, Spencer, Hanna and Caleb team up to investigate and discover new information about Charlotte’s death; and Mary Drake returns with a gift for Spencer and Alison.”

Aria is on the side of the road. An officer is trying to help her get the keys she supposedly locked in the trunk. He presses on the trunk, but gets a call when it opens. He turns away. Aria slides her arm in and grabs her keys on top of a body.

All the girls, Ezra and Caleb are talking. They are trying to make Hanna realize that Mona is AD. Ezra tries to call Aria but she isn’t answering. He gets upset and tells them they can’t just cut Aria off, she made a mistake.

Aria is driving, talking out loud and to the trunk. She can fix this. Meanwhile, Mona arrives home. She finds a note left for her. Caleb and Hanna are outside Mona’s and see her leave. They follow her. Spencer goes to visit her bio mom. Her mom has a gift for her, her motel. She has put her name on the deed. She knows about the girls, the police and what is happening. She wants to help. She tells her goodbye.

Ally thinks Ezra is right. Her and the others should be looking for Aria, she tells Em. Emily is scared that she could be arrested. She is pregnant. Emily promises her that no one will hurt her. Gas is leaking into the house through the fireplace.

Spencer, Hanna and Caleb are all watching Mona from the outside of a diner. While Spencer and Hanna are talking, Caleb slips into the diner. They watch him approach Mona inside. He sits and asks her if she likes her pie. He wants to know who she is waiting for. He tells her that they are going to go for a ride to the police so she can confess. They are going to pick up the game. She tells him she doesn’t have the game. Someone stole it from her. Mona makes a run for it. Hanna and Spencer come in. She went into the ladies room but when they go in she is gone. A wall opens up. Caleb and Spencer head down while Hanna leaves to go see the others.

Ally is having a bad dream. She is in the classroom and they are coming for her. Emily wakes. Ally and she both fell asleep. The game goes crazy with a video of Ally saying over and over – we don’t have a lot of time. Someone bangs on the front door.

Caleb and Spencer make their way through the dank underground cellar. Caleb confesses that he and Hanna are married.

Ezra, Aria, Ally and Em are all in the car driving. They apologize to Aria for shutting her out.

They come upon a police check point. Meanwhile, Hanna is outside the church trying to make a call. Rose petals fall from the sky. She looks up. She goes up into the bell tower. Mona is up there dressed like her younger self She calls Hanna the name charlotte. Hanna flashes back to when she met Charlotte in the bell tower. Charlotte threatened her that no one would believe her. Mona pushed Charlotte to the edge of the tower door. She tells her to jump or she will push her. Mona returns to reality and tries to push Hanna too. Caleb stops her.

They take Mona to their car. There are 2 puzzle pieces hanging. The gang all meets up. The girls place the puzzle pieces in the game. The face of Tanner Rollins pops up as well as Ally’s Aunt Carol’s house. The girls head to the graveyard. Aria doesn’t want to do this anymore. She wants to leave Archer to the worms. They need to walk away. Spencer agrees. They all agree to head to leave. Lights come out of nowhere. It’s the police. They are brought down to the station. The detective comes in and tells them the body has been identified as Archer. She tells them to get comfortable.

They watch the adjoining room light up. Mary is in there. She confesses to killing Archer after he blackmailed her over her own sister’s murder. The detective comes in and tells the girls that they care free to go. The girls all seem shocked. The detective knows Mary is guilty of killing her sister. She isn’t sure about Archer. She tells them all to go home. Spencer asks to see Mary, but is denied.

All the girls go home to see Mona. They have called her doctor. They apologize for pulling her into the game. Mona apologizes for messing up everything with Charlotte. Mona recalls how she and Charlotte fought. She pushed her up against a pipe that went right into the back of her neck. It killed her. The police never figured it out and it was right there the whole time.

The game powers down. They think it is over. They all leave, leaving the game behind on the bed. Meanwhile, a hooded figure with gloves drives down the street with figurines of the girls in their back seat.