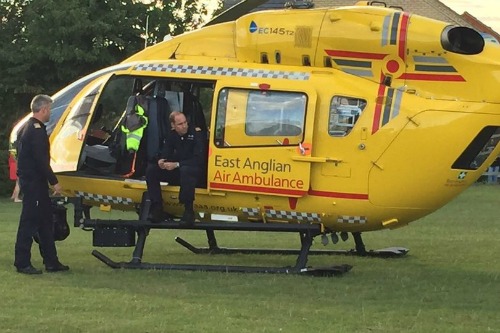 Prince William has been left devastated after a patient died during his final shift with the East Anglian Air Ambulance. Reports indicate that a woman in her 50s died on Saturday morning, July 29, from her head injuries.

Prince William flew the unidentified woman to Cambridge’s Addenbrooke’s Hospital during his final shift on the job. She was hit by a marked police van near Hethel, in southwest Norwich on Thursday, July 27. She had been reported missing in a 999 call. The East Anglian Air Ambulance treated her for her serious head injuries at the scene.

According to local reports, Norfolk Constabulary said in a statement that it had “referred the matter to the Independent Police Complaints Commission, who have begun an independent investigation into the incident.”

For William, this is absolutely devastating. The Duke of Cambridge is stepping down from his role at the East Anglian Air Ambulance to focus more on his royal duties. This is because his grandmother Queen Elizabeth expects William along with his wife Kate Middleton and his brother Prince Harry to put in more of an effort into their royal obligations.

Up to this point, Queen Elizabeth, Prince Philip and even Prince Charles and Camilla Parker-Bowles have been putting in much more work, time and effort into their royal engagements and charity work compared to William, Kate and Harry. That’s why Queen Elizabeth has made it pretty clear that she expects the three of them to focus more on their royal duties than anything else.

Prince William didn’t expect that his last shift with the air ambulance would be so emotional. It’s without a doubt that this will take a toll on him. With the 20th anniversary of Princess Diana’s death coming up, he’s had a lot on his mind. If that weren’t enough, he and Kate Middleton are going through a lot of changes right now.

They’ve relocated their family to London full-time and are being pressured to make more public appearances as a royal couple. It’s no wonder that William often looks tense and uncomfortable as he has so much going on in his mind. And now the missing woman’s death is something he would be able to forget for a very long time.

Prince William is yet to make any comments about the ambulance patient’s death. In the meantime, don’t forget to check back with CDL for all the latest news on Prince William and the entire royal family right here!