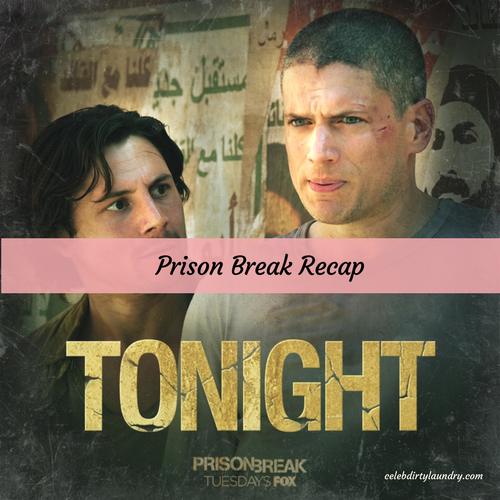 Tonight on FOX in the next chapter of their popular drama Prison Break a new Tuesday, April 25, 2017, episode and we have your Prison Break recap below.  On tonight’s Prison break season 5 episode 4 called, “The Prisoner’s Dilemma,” as per the FOX synopsis, “Michael, (Wentworth Miller) Whip and Ja make their last attempt to break from Ogygia, but must make a deal with the devil to do so.”

Lincoln is in the hospital with Sheba. Her father wants to show his thanks. He might be able to get Michael out before the city goes to hell.

Michael is in a cell. Ramal is in the one next to him. Ramul tells Michael he is going to die. The artillery strikes are getting closer. Michael yells to Whip. He has another plan. He asks Whip to look for an “S” in the cell he is in. Whip isn’t seeing anything. Ramal laughs. It’s in his cell. His men are getting closer.

T-Bag calls Sara, their friend Poseidon has surfaced. Sheba’s dad drives Lincoln through the city. It’s chaotic. They visit a man who can offer Michael a pardon for a price.

Michael asks Ramal if they can work together. Ramal isn’t interested.

Jamil and Lincoln shows up at the prison. All of the men are running out. They are abandoning the prison. The pardon was a waste. Lincoln goes in. Jamil heads to the airport to save them 2 seats.

A prison guard unlocks a gate, letting himself out and locking the test of the prisoners in. Lincoln goes after him to get the key. All of the prisoners begin panicking. Cross rallies, getting them worked up to fight ISIL.

Ramal asks Michael to tell him what to do. The guard with the keys is shot down by ISIL while Lincoln watches from the corner of a building.

T-Bag questions Kellerman. He accuses him of being Poseidon. Kellerman tells him that he isn’t Poseidon. He laughs.

Michael instructs Ramal about the S in the wall in his cell. He tells him to remove the block and pull the water pipe down. He gets it down. Shots are fired. A guard demands all the prisoners get back in the block. Michael instructs Ramal to keep going. Cross tries to talk the guard into joining forces. He will live if he does. They want the keys to solitary. Cross hits him and steals the gun. Whip panics.

Michael instructs Ramal to remove the hinges on his cell door with the pipe. Ramal tries to do his own cell first. Michael tells him to trust him. They have to do each other’s hinges for it to work. Ramal gets the hinges. Michael frees Ja, Whip and Ramal. Ramal promises Michael they will work together for safe passage.

Lincoln uses the help of a local kid. He distracts ISIL so he can get the keys. Michael and the guys work to get out while the other prisoners try and hint them down.

Kellerman tells T-Bag that Poseidon probably wants Ramal free from prison. He does it all without a network. Kellerman doesn’t finish his sentence – he is shot through the window. He yells for T-Bag to go. The two people following Sara come into the house. T-Bag runs to the cellar, calling 911.

Cross chases Michael and the guys while firing shots at them. They hide. Ja grabs a shiv, jumping out and stabbing cross. They all jump on him He falls to the ground. Meanwhile, Lincoln has unlocked a gate. Prisoners flood through while Lincoln yells for Michael.

Ja picks fruit out of a cart while they wait for Ramal’s friends. Michael gets angry and tells him he can stay behind – he is a liability. Michael throws him into a cart. Lincoln keeps looking doe Michael. Ramal turns on Michael in an alley. He makes him get on his news. He puts a knife to his throat. Lincoln shows up. He jumps on the truck with a gun, pointing at Ramal and the others. They have standoff. Whip distracts Ramal and then stabs him. They all run after Lincoln shoots off a few rounds.

T-Bag gets photos of the hit man and their boss.

Michael, Lincoln and the others take shelter in a shop. They see news reports. Ramal is dead and ISIL is after them.