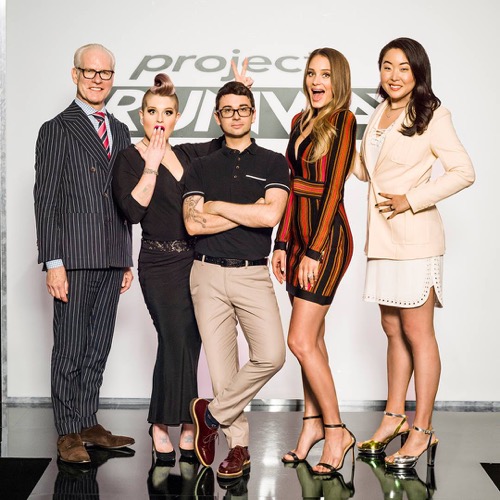 It’s not everyday that Tim Gunn decides to fence on the runway however the renowned powerhouse had wanted to introduce the young fashion designers on “Project Runway Junior” to Tim Morehouse.

Tim Morehouse was an Olympian. He won several meals as a fencer and Tim Gunn had apparently met him when his namesake recently opened a fencing school. However, Tim had come to like the fencing gear and even the traditional attire that came with it. So that became the challenge tonight. Tim had asked the designers to create an Avant Garde look that was inspired by the fencing gear though to make the challenge even harder the designers were also going to be split in teams. And well not everyone got lucky with their partner.

There were a few that believed that they had gotten the best choice as a partner because their styles had accommodated each other. Though Hawwaa and A’kai weren’t like the others and they had had a problem with their partnership. So must of their problems began with the fact that neither of them knew exactly what Avant Garde was and so they were just winging it yet that plan of action didn’t work for them either. They didn’t know what to do so eventually Hawwaa took over and A’kai merely became servant.

Yet, the true challenge behind the partnership as well as the Avant Garde entire had been to push these designers out of their comfort zone because the judges had wanted to know if they still perform under pressure. So Hawwaa and A’kai had proved that they couldn’t work outside their comfort zone. They needed their fallback patterns and someone that would take them seriously rather than Hawaa feeling like she had to lead and A’kai feeling resentful of the way he was being treated, but what was truly hurting their partnership was the lack of communication.

Everyone else had communicated with their partner and had drawn their design beforehand with both partners having an input. With even Chelsea and Allie for instance having leaned on each other when one had worried about the dress they were building. But Hawwaa and A’kai didn’t have that type of easy relationship and they were doubting each other’s work when thankfully Tim Gunn had showed up in the design room. Tim had wanted to check on everyone’s progress and he had liked what he had seen as well as heard. So Tim didn’t have much criticism for anyone much the duo.

So there had been no reason whatsoever for Hawwaa to get frusted with A’kai. A’kai had been working at the same pace as Hawaa and neither of them had gotten very far with their design. However, Haweaa simply hated A’kai for no reason and took that out on him. Hawwaa had claimed that A’kai was moving too slow, that he had wasted hours on doing nothing, and that he had been such a disappointment that Hawaa ended up leaving the design room. She said that she was done and that left her partner to work on their project. And that hadn’t been fair.

A’kai was working on the bottom however he had needed to be in communication with his partner as she worked on the top. So poor A’kai had gone to Tim seeking advice and Tim had told him that he should stick to focusing on his own part of the work. Though later Hawwaa had gotten made at A’kai for making his own decisions about the bottom of the dress so that had caused another argument because Hawwaa had gotten frustrated with A’kai not telling her that he was going to change up their initial design. And so A’kai had sort of clapped back.

A’kai had told Hawwaa that he was focusing on the bottom and that she should stick to the top of the dress. Yet, Hawwaa had a point in the end. She had created a top that she thought would go with a matching bottom so she had been surprised that A’kai had changed the creative direction of the entire outfit. So Hawwaa had tried to remind A’kai that Tim Gun had heard their original plans and had liked them just as they were, but A’kai didn’t care about what Hawwaa was trying to tell him. He had found his nerve and he didn’t want to back down.

But the runway proved who won that fight. There were great designs, they were safe designs, and then there was the messy execution that A’kai and Hawwaa provided. Their dress hadn’t made much sense until Hawwaa had had to explain their inspiration to the judges and even then, on the runway, the two had gotten into an argument. A’kai had to explain that he was supposed to do the collar and that Hawwaa had did it instead however she had wanted it known that she had done the collar because A’kai dropped the ball. So the judges had seen that and hadn’t liked it.

The judges had liked several outfits on the runway because they thought it was too dated or again simply safe, but it wasn’t long until they were talking about eliminating either A’kai or Hawwaa. They had discussed the execution of the dress which had been wrong and they were caught between who they should eliminate. Like Kelly and Christian. Kelly had thought they should let A’kai stay because he had just been overwhelmed with the challenge and the otherside of that argument was Christian who believed A’kai should go because of that skirt.

Th skirt had seams showing and overall it had been horrible. Though the same could be said about that top because the judges hadn’t really liked until they removed the collar. So it had been a tough choice for the judges and they eventually chose to eliminate A’kai because of the skirt they didn’t like yet Tim Gun had used his one save for A’kai and that allowed A’kai to stay for an extra week.