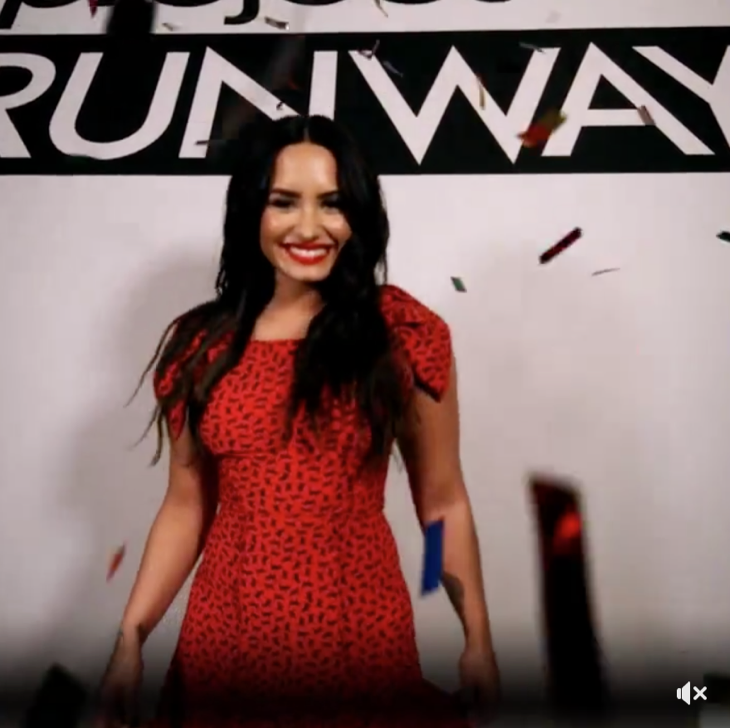 Tonight on Lifetime their Emmy Award nominated series Project Runway airs with an all-new Thursday, September 7, 2017, episode and we have your Project Runway recap below!  On tonight’s Project Runway season 16 episode 4 “We’re Sleeping Wear?,” as per the Lifetime synopsis, “It’s the Heidi Klum Sleepwear Challenge, and the designers are invited to a slumber party on the roof of the Empire State Building. Demi Lovato joins as guest judge.”

The show opens with Heidi and Tim telling the designers of their next challenge. They will be creating a sleepwear look for Heidi’s intimate sleepwear line and be making their own textile. Samantha is excited because she loves painting and thinks this is right in her wheelhouse while Kenya is nervous because she has never done something like this before. The group is being sent to the top of the Empire State Building to sleep. Claire and Shawn are both not thrilled about the sleeping arrangements due to their fear of heights.

All of the designers find the building inspirational and several use the images in their designs. Tim brings the group breakfast and then they head back to the workroom. The group has eleven hours to create their textile and designs. The group gets a little rambunctious picking their fabrics with some mild pushing and shoving but everyone gets what they need. Kenya struggles with both the textile and sleepwear creation. She doesn’t have experience with either.

Both Kentaro and Deyonte feel the pressure because they were in the bottom three last week and don’t ever want to go through that again. Both Samantha and Kenya help Kentaro with the cut of his garment as he learns how to design for a plus size model. Both Claire and Shawn continue to annoy the other contestants. Heidi visits the workroom and gives feedback to the designers. Of course, Shawn blows off Heidi’s input. After speaking with Heidi, Deyonte decides to scrap his plan and start over. Ayana is using a much less modest design for her sleepwear. She tells Heidi that while Muslims are very conservative in public they wear less in the privacy of their own home.

Heidi reminds all of the designers that women use the restroom often in the night. They want to wear something that is easy to get in and out of if need be. There also has to be to be an ease in movement. Several of the designers create amazing fabric but several also really feel lost. Shawn and Claire help each other out and Margarita thinks it isn’t fair. The models arrive and very few get to try on an actual piece of clothing, the designers are all really having a hard time. Several are using silk and have trouble sewing the material. Time is up for the night and no one feels confident.

The group returns to the workroom in the morning and has just two hours before the show. Kenya continues to have problems sewing her silk fabric. Tim reminds everyone to use the JC Penney wall and Avon make-up lab. Claire and Shawn run around frantically and bother the other designers. Kentaro gets his garment into the dye with less than an hour to spar. Several of the other designers worry it won’t be dry in time.

Heidi welcomes the group to the runway and introduces the judges. Heidi, Zac Posen, Nina Garcia and Demi Lovato will be the judges for the evening. Amy loves her overall look. Brandon is also happy with his final product. Margarita and Claire both are thrilled with their designs. Michael thinks his garment is clean and likes the flow. Ayana is happy with her three piece look.

The show ends and Heidi calls Michael, Kentaro, Aaron, Deyonte, Kenya and Shawn up to the front of the stage. The other designers whose names were not called are safe and can leave the runway. The six names that were called have the highest and lowest scores. One will be the overall winner and one will be sent home. Michael is the first to tell the judges about his look and the judges loved it. They thought it was sexy and very New York. While the judges liked Aaron’s fabric they all think it is shabbily made and just not well done.

Shawn wanted a sleek and slender look and the judges think she really succeeded. They call it pajama glamor. You could sleep in it and also wear the outfit on the town. Deyonte’s look is not good. The judges find it boring and not sexy at all. The judges LOVE LOVE LOVE Kentaro’s look. Both the fabric and design is just beautiful. All three female judges would love the wear his outfit. Kenya cries from the feedback she receives. Zac tries to lessen the sting by complimenting her color choice but the design is not good as a sleepwear item. Heidi would not want to wear it or have it as part of her collection.

Shawn, Michael and Kentaro are the top three while Aaron, Kenya and Deyonte are the bottom three. The judges review the final products and are blown away by all three designs. Picking a winner will be difficult. The judges agree that all three designs at the bottom are equally horrible but this is the second week in a row that Kentaro has presented a shapeless garment. Michael is declared the winner and his design will be sold with Heidi’s intimate’s collection. Kenya is safe. Heidi announces that Aaron is also safe and Deyonte is going home.