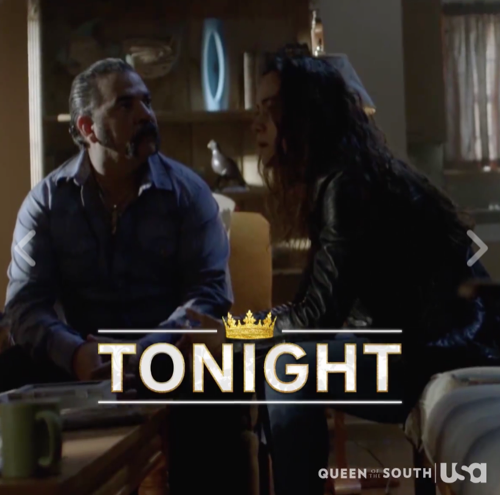 The show begins with Teresa falling asleep at the wheel of a car and almost hitting a semi head on. She has a dream of her running as a young girl but wakes up as Kelly Anne screams. They continue to drive but are pulled over. The officer tells Teresa to step out of the car but Kelly Anne convinces him to let them go. The DEA gets word that Cole didn’t show up for work. They think they will never see he or Kelly Anne again. Teresa leaves Kelly Anne in the car and goes to meet with James. She tells him she is getting out of the business. She knows Camilla was planning on framing her. She is done. Teresa tells James to let Camilla know she has paperwork that could send Camilla to prison for a very long time. Camilla needs to let Teresa go. Teresa asks that James promise that when Camilla sends someone to kill her it won’t be him. He doesn’t answer.

Camilla meets with James and her new lawyer in the visiting room. James tells her everything and Camilla says he should have drug Teresa back by her teeth. She wants James to pay her bail and then they have to find Teresa. The Villobo brothers will take care of her after that. It is too late to save Teresa. He crossed Camilla once to protect Teresa and she won’t let it happen again. Kelly Anne and Teresa stop at a gas station and Kelly Anne swipes her ID when she buys alcohol. Kelly Anne asks what Teresa’s life was like growing up and Teresa flashes back to when she was running as a child and finds a dead man bleeding in the street. Teresa response it was a wonderful life.

Camilla calls Teresa and says Cole wrote up the paperwork not her. She wants Teresa to come back. Teresa refuses and Camilla tells her where ever she goes Camilla will hunt her down. Teresa hangs up before she can finish. Kelly Anne drinks vodka and says Camilla is one scary bitch. The DEA meets with Camilla and she says she knows they planted the drugs in her car. She knows and they know. The DEA agent says he knows she owns the shipping company, traffics in drugs and that she killed a DEA agent. Camilla tells him to drop the charge before it is too late. He asks if she is threatening him. She says she is just suggesting he do what it right.

Another agent interrupts and says they got a hit on Kelly Anne’s ID. They head out to find her. Kelly Anne tells Teresa they need to give the paperwork to the DEA but Teresa knows if they do Camilla will never stop hunting them. She burns the paperwork that implicated Teresa. Camilla calls Denny and tells him not to kill Teresa until they get the papers. If she puts up a fight Camilla tells him to burn down the place where she is staying. Teresa again dreams of running as a child and finding a dead man bleeding the street. She wakes to see water coming out from under the bathroom door. Kelly Anne has taken a bunch of pills and tried to drown in the bath tub but Teresa is able to revive her.

Teresa tells Kelly Anne that it is going to be OK but she doesn’t believe it. She killed her husband and now they are on the run. Teresa says they are both were they are now because of the men they loved. They are survivors and they will be OK. Pote comes and brings Miguel. He says that if Camilla finds them they are dead. The DEA review tapes from the store where Kelly Anne bought the alcohol. They decide to check out houses in a ten mile radius. Teresa flashes back to her communion as a young girl. A gun battle breaks out and her mother is shot. She runs and finds a dead man in the street. She takes his gun and hides as her father is shot. She tells Miguel he has to learn how to shot to protect himself.

Camilla is thrilled to have her daughter visit her in jail. She tells her mother she was right about everything. She is so sorry she turned her back on her. Camilla says she is the one who needs to be forgiven. She let her ambition get in the way of her being a good mother. They promise to start over when Camilla is released. The DEA find the house where Kelly Anne, Teresa, Pote and Miguel are hiding. They have no cell phone reception so the move in without back-up. The alarm on the house goes off and Teresa and Pote see the DEA agent walking up to the door.

Teresa and Pote go outside. Teresa says she will talk to him but he has to let the others leave. Kelly Anne, Miguel and Pote drive away as the DEA agent and Teresa go into the house. He says if she turns on Camilla he can protect her. He knows she is running from Camilla. Danny and his men show up at the house. Teresa tells the agent she is not a rat. Danny and his men attack the house and shot the DEA agent. He is not badly wounded and they realize the men have been sent by Camilla. Val and Denny fight and she shot Denny. A grenade is thrown into the house and Camilla’s men storm the house. She and the DEA agent fight them and are able to kill them all. He again tells her she has to turn herself in if she wants to live. The agent lets her leave because she saved his life but tells her he will be coming for her. Teresa leaves but gives him the paperwork that implicates Camilla.

Teresa arrives at the house where Pote, Kelly Anne and Miguel are hiding. The TV is on in the background showing Camilla being re-arrested for her role with the shipping company. Pote and Teresa plan to hide Kelly Anne and Miguel somewhere safe and then return to Dallas. She says they will then take what is rightfully hers.