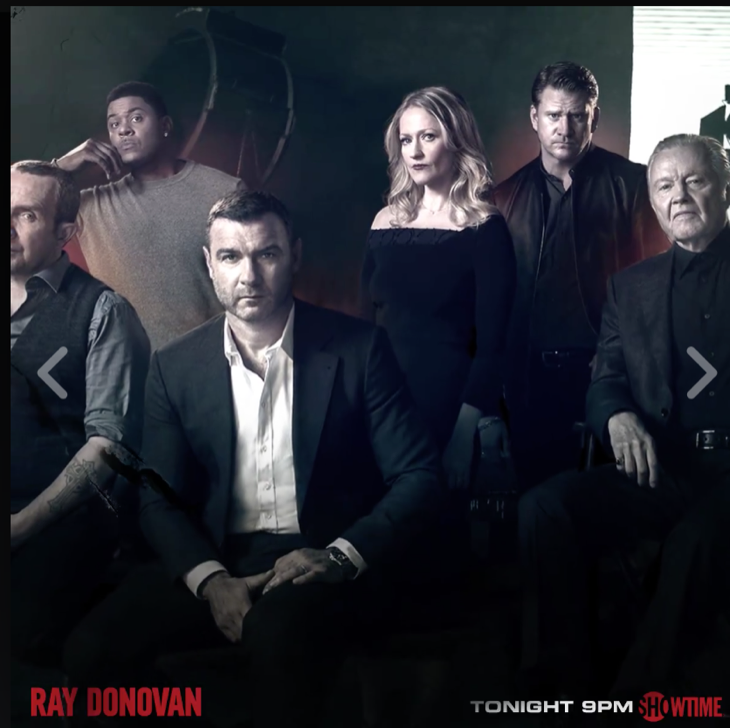 Tonight’s Ray Donovan season 4 finale is going to be exciting.  So be sure to bookmark this spot and come back from 9 PM – 10 PM ET for our Ray Donovan recap.  While you wait for our recap make sure to head over and check out all our Ray Donovan news, recap, spoilers & more!

Ray Donovan Season 5 PREMIERE begins tonight with Mickey Donovan (Jon Voight) arriving at the flower shop in town ordering flowers for his son’s wedding. He grabs a dozen yellow roses and heads to the cemetery.

Ray Donovan (Liev Shreiber) is called into an office and asked about the fight he got into; Ray doesn’t want to share anything saying it was a family thing and cops shouldn’t have been involved. He is told they were and to tell him what happened in his own words. Ray has a flashback but maintains it was a family thing.

His 19-year-old daughter called the police, his brother and father were hospitalized and he wants to know what kind of family thing is that? Ray admits he has done therapy before, but it was 15 minutes, his wife said what she needed to say and they worked it out and left. When Ray asks if there is another way they can work this out, he is told 12 sessions completed in 90 days and follow the rules of his probation. Ray is told to return in 2 days and they will continue where they left off.

Terry Donovan (Eddie Marsan) is in a tailor shop, when he is asked to take off his hat, he does and reveals scars on his head. He says they are from surgery for his Parkinson’s; he shows how if he turns off the pace maker his Parkinson’s back, he is assured the suit will be ready for tomorrow. Meanwhile, Bunchy Donovan (Dash Mihok) is busy training in the wrestling ring.

Ray arrives at Abbys, chastises him for bringing the dog into the bar. Terry told Mick to order non-alcoholic beer as Ray sits down at the bar to fill out paperwork for therapy. He learns he got a “B” in the health inspection, Harriet Greenberg (Jayne Taini) tells him to sell as he is losing $20 grand a month. When he says no, she tells him to burn the money. She sits with Mick who tells her about the screenplay he is writing. Ray has flashes of Abby (Paula Malcomson).

Bridget Donovan (Kerris Dorsey) arrives at Villains Tavern where Jake works. She admits she found out he works there, he says that is creepy. When he asks about her mom, she begins to cry and he offers his condolences and walks with her for a bit. He suggests they go to his apartment and get stoned; promising to get her Swedish meatballs. Ray fills out all his paperwork as Mick continues to talk to Harriet about ideas for his screenplay. Ray tells him to write what he knows, let his heroine die.

Ray comes to the office and Punch is furious that their father isn’t counting him and Lena is bossing him around with paper and coffee; he complains he brought his family back to help Ray but then announces he is going on a wrestling tour. He says screw this crap and walks out.

Bridget is with Jake, they are smoking marijuana and eating Swedish meatballs when she asks him if he had the surgery; he said he didn’t as he got sick and is back on trial medications and he isn’t sure he will ever have the surgery. She apologizes when he says it was meningitis; she realizes if he doesn’t get the surgery he will die. He doesn’t want things to be weird but he thinks she is very beautiful. He asks if she wants to hang out, he will grab a bottle of wine; she agrees and he leaves her at the apartment while he retrieves the wine.

Terry arrives at the LA Police Department, takes off his hat and walks in to bring Maureen “Maury” Doherty (Tara Buck) her coffee and lunch; as soon as he greets her, her brother, LAPD officer Todd Doherty (Billy Miller), knocks and tells her Robbery needs her. Todd reluctantly acknowledges Terry, even when Terry asks him to make a toast at the wedding. Todd tells him he ran a check on him and some stuff came up; Terry says Maury knows he was in prison. Todd shows him something saying that wasn’t so long ago.

Ray arrives on the movie set, Ray says he is there to fix problems, not make them. He is told they have a board meeting in 3 weeks as they talk about Vicky Delgatti (Adina Porter).He says Sam brought them in 3 years ago and they have been good soldiers but Sam overused them and built Vicky her own wing in the administrative building and been using company money to fight her personal wars.

Ray is told that once Sam cut ties with them, they took files and disappeared. He is told all relative material in their possession must be returned. Any discussion of their relationship with, Samantha Winslow, either written or verbal, is strictly forbidden; and any further contact with any employees ceased. Sam isn’t interested in going the legal route, she just wants her stuff back. He hands Ray his payment, after giving him two bag saying the money will be refreshed annually, as long as Sam is chairman of the company.

Ray meets with the people who stole Sam’s stuff, he tells them the terms, there are two bags with $500,000 each, the same every year moving forward. Ray says maybe Sam will retire the three of them and they can set up shop then but she isn’t retiring, she will work until she dies. Ray asks if they are taking the money or not, and they tell him they don’t have another choice. Ray is told not to meet Sam as she doesn’t do things right.

After the exchange is done, Ray receives a call about a very motivated buyer and agrees to meet her at the house. Ray calls Conor Donovan (Devon Bagby) saying he isn’t too busy to come see his match; Conor asks about Bridget and hangs up when Ray doesn’t respond about talking to her.

Ray didn’t fix the wall in the house and Mickey arrives asking if there is a showing, she says there is; he makes himself scarce as Ray goes to the garage and grabs the tools to fix the hole in the wall. The car lights flicker and Ray begins to reminisce a drive with Abby, where she tells him he should let Mickey move in as he is lonely and they have room. Ray disagrees but she tells him Mickey saved their butts. She begins to sing to him saying the song reminds her of her 25th birthday.

The phone rings and its Bridget saying she met the kid; telling him he knows what kid and hangs up. Jake/Smitty (Graham Rogers) returns to his apartment as the doorbell rings and the buyers are there to see the house. He tells her he cannot do it, not today and not yet. She nods. Ray’s phone rings again and he wants to know where the boxes are from Vicky and Tom; he needs to deliver them immediately.

Ray arrives to see Doug Landry (Michel Gill), confirming he got everything and its in the car. Ray wanders into the house while Doug retrieves the boxes. Samantha Winslow (Susan Sarandon) comes down the stairs and talks about her husband, Roger who used to go on safaris.

She tells him a story of an Australian hunter who was after a lion who killed 25 men, the hunter went to find the great beast and discovered the villagers would bring in their goats inside to keep them safe but ran out of room so pushed the elderly outside. She stands before the lion and says a lion is a lion and asks if he thinks there is a moral to the story. She says its not about getting old, its about not getting pushed out. She asks him to give her son, George a lift as he doesn’t drive.

Bunchy is dressed and ready to wrestle, Teresa (Alyssa Diaz) escorts him to the ring. Meanwhile, Terry is looking at a necklace, with tears in his eyes. Ray drives George who asks him about the hotel where all the Munchkins stayed while filming the Wizard of Oz. Ray gets a call again and Terry says they need to talk, saying its extremely important and is at the club. George continues to talk about the movie and how the munchkin killed himself during the filming of the movie.

Ray tunes him out and remembers traveling with Abby again; he asked her what she wanted to do – anything. She says she’d like to open a bar, a place for the family to get together. He says she left Boston to get away from the bar; she says it would remind her of home. They swerve to miss a girl running in the street and crash down the hill. She says she is okay but he sees the bump on her head; he gets out of the vehicle and sees the girl standing at the top of the hill in her panties and bra, she runs off when she sees they’re alive.

George says he saw his sister die and when Ray asks him what he said. He says, “Home is where the heart is”, that is what Dorothy said. Ray says there is no place like home and George says that’s his whole point. Bunchy wrestles and when he catches Theresa, he harms one of the other wrestlers.

Ray enters the club and sees the bar full of people and Abby walking towards him. He smiles at her vision, while she smiles with tears streaming down her face. When he comes back to reality, he follows her spirit to the back of the empty bar and finds Terry in the back room. Terry asks him to sit down, he says Abby was right that he shouldn’t have lied. Terry cries and says its over between him and Maury as her brother found out about Nevada. Ray says everyone makes a mistake and Terry hands him a box saying not like this.

Mickey reads his screenplay to his dog and when he gets to the part where his little girl needs his heart, he cries but is startled by Ray’s return. Ray grabs some alcohol and walks out of the kitchen; he flashes back to when he came home from a trip and hears someone hysterically crying in the house. He finds Bridget crying, he asked what happened and sobs. He opens the bedroom door and sees the empty bed; he walks into the closet with his drink and opens the box Terry gave him. He begins to quiver and closes the red box.

Mickey continues to tell the dog his story; pausing as he says they have a ray of hope. He turns off the lights and is ready to go to bed when he notices Ray sleeping in Bridget’s room. Mickey takes the bottle from his hands and says she was the brightest star in the sky and tells Ray to sleep.