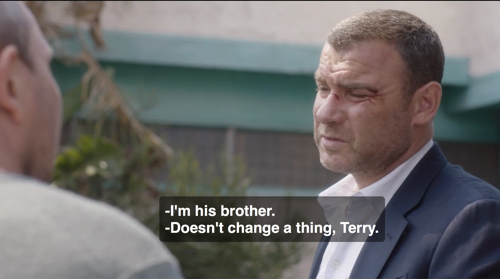 Tonight on Showtime Emmy Award-winning drama Ray Donovan airs with an all-new Sunday, October 15, 2017, episode and we have your Ray Donovan recap down below.  On tonight’s Ray Donovan season 5 episode 10 episode called,  “Bob the Builder” as per the Showtime synopsis, “ In the wake of a tragedy, Ray turns on Sam – consequences be damned.”

Tonight’s Ray Donovan season 5 episode 9 is going to be exciting.  So be sure to bookmark this spot and come back from 9 PM – 10 PM ET for our Ray Donovan recap.  While you wait for our recap make sure to head over and check out all our Ray Donovan news, recap, spoilers & more!

Ray Donovan (Live Schreiber) sits on his couch as the police work around him. He watches as Natalie James (Lili Simmons) lifeless body is being photographed on his bed. Dt. Veronica Martinez (Roxana Brusso) orders him to ride to the precinct with her. Sam Winslow (Susan Saradon) sits with Doug Landry (Michael Gill) who demands the studio, she tells him to go screw himself but he informs her that he knows who killed Tom and how much she paid him. He then tells her he wants the studio and the network, but she says she wants the news, all of New York and he agrees.

Terry (Eddie Marsan) carries his brother, Bunchy (Dash Mihok) up the stairs into the boxing club. Sam calls Ray, apologizing for the senseless tragedy; she orders him not to mention Doug nor his relationship with Natalie. He hangs up on her, saying nothing. Potato Pie (William Stanford Davis) is concerned about removing the bullet, but Bunchy says no cops. He suggests Raymond, but Terry orders him to just stop the bleeding.

Ray is interrogated, admitting that Natalie was his guest and she was his client. Ray reveals she was pregnant, but the baby wasn’t Tom’s child, it was Doug Landry’s; the detective leaves the room when she hears that.

Bridget (Kerris Dorsey) arrives at a hotel where there is a surgical neuro-oncology summit happening; she listens in on one of the sessions showing the miraculous results from the surgery her mom and Smitty (Graham Rogers) should have had. Terry calls Ray from Bunchy’s phone, revealing he got shot in the shoulder, refusing to go to the hospital. Ray gives him an address and tells him to meet him there.

Mickey (Jon Voight) is sitting in the kitchen with a bag of frozen vegetables on his groin. He is complaining about the pills the escort gave him; Daryll (Pooch Hall) tells him he shouldn’t take the fake Viagra, even calling one of them “Bob the Builder”. Daryll tells him to alternate between hot and cold to stop the throbbing.

Ray meets Terry and Bunchy at the veterinary clinic; as Bunchy is going under, he talks about old times as he is falling asleep. Ray needs to donate blood as he is the only match to Bunchy for a transfusion. Terry talks about all their blood types because it was what their mother made him remember when she got sick.

Mickey is in his bedroom, using a blow dryer and Daryll says this is a medical emergency as Mickey says he needs to pay for the good times and has to go to urgent care. At the vet, Bunchy comes out, saying he isn’t going home, they are going to get his money, asking Ray to help him. Terry says it’s just money but Bunch says it was 1.2 million dollars and it was his settlement money; that money is everything he’s got and the only thing he has to give his family a shot. Ray agrees to help him but tells Terry he is not coming, and being brothers has nothing to do with it. Bunch says if they’re both not coming with him, he is going alone.

Bridget walks into the luncheon and interrupts the Doctor Bergstein (Kim Raver) who was giving the presentation earlier. She says Smitty needs the surgery and refuses to make an appointment because he is dying. The dr says hopefully he will be selected the next round as Bridget says this isn’t a game and there is something she can do.

Mickey and Daryll sit at the medical clinic as Mickey tells him he called Jay White (Brian White) last night and told him they are doing his script the way he wrote it. He tells Daryll to get in line or he can say goodbye to his movie producer career. Mickey says he has the leverage on Jay, not him; revealing he is going to cash the check they gave him for all the aggravation. Jay calls Daryll as Mickey is called into the room; he leans in and tells Daryll to back him up. Daryll tells Jay he had no idea his dad would play that card but they are still committed to the switched script; Jay orders him to come to his office right now. Daryll leaves Mickey behind and goes to Jay.

Bunchy learns that Ray hit Terry and wants to know why. Terry reveals that he told Ray he helped Abby (Paula Malcomson) home from the bar that night and helped her kill herself because she knew Ray wouldn’t. Ray arrives and they switch vehicles.

At the clinic, Mickey needs to have an injection into his groin to remove the blood; Mickey asks Dr. Rubenstein (Jennifer Sommerfeld) to take a ride with him but she says she is a married woman.

Ray gets out of the car, telling his brothers to stay behind as he walks towards the farm house. He opens the door, searches the house but no one is there. Bunch comes in with another gun, saying it’s his money. All three of them toss the place, Bunch finds a drug lab while Ray discovers a dog with its legs bound and hanging by its neck. He walks to the back barn and finds a metal chest under a board; inside it is the bag with the money.

As he is about to walk out with it he is attacked; inside the house Terry and Bunchy wonder where he is, just as the guy is about to deliver the final blow with the wrench, Ray gets him back, whacking him over the head. Ray turns his back and Acid Man (Jake Busey) raises a gun at Ray; Terry shoots him in the chest.

Mickey leaves the clinic saying his pipe is drained and upset that his son left him there. Daryll meets with Jay, who says they can make Four Leaf and tells Daryll to shut the hell up and the only reason he is doing it is because his racist father is blackmailing him. Daryll apologizes saying this situation can be worked out; he gives him his word saying the tapes won’t see the light of day. Jackson Holt arrives from the DA office, saying he can answer some questions regarding his father.