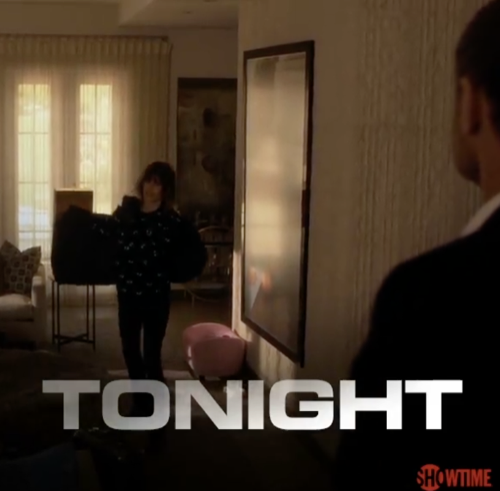 Tonight on Showtime Emmy Award-winning drama Ray Donovan airs with an all-new Sunday, August 20, 2017, episode and we have your Ray Donovan recap down below.  On tonight’s Ray Donovan season 5 premiere episode called, “Dogwalker,” as per the Showtime synopsis, “Ray cleans up the mess left after Natalie shot her husband. At home, Ray struggles to reconnect to his family and complete anger management. Meanwhile, Terry visits Conor at military school; and Frank Barnes visits Mickey and it threatens to sink him back into a life of violence.”

Tonight’s Ray Donovan season 5 episode 3 is going to be exciting.  So be sure to bookmark this spot and come back from 9 PM – 10 PM ET for our Ray Donovan recap.  While you wait for our recap make sure to head over and check out all our Ray Donovan news, recap, spoilers & more!

He offers her a drink or some food, but she gets up, cuddling her dog and cheers to a long and happy life. Ray goes to Natalie’s house, finds everything trashed and when he enters the bedroom he spots blood on the wall. Natalie’s husband comes out stabs Ray in the chest with manicure scissors and he kicks him down the stairs. He carries him into his trunk. He calls Lena (Katherine Moennig) and tells her what happened and to clean the place up; he’s not worried about his probation officer finding out.

Mickey is sound asleep with Pepper sleeping on his chest, while Natalie showers. Ray brings the body to the LA Central Animal Hospital. Natalie goes through the drawers and finds some clothes to put on. At the Animal clinic, he is screaming from the dog cage he is in and Ray removes him so they can knock him out and remove the bullet.

Maury (Tara Buck) gets ready for work and packs her clothes telling her newlywed husband, Terry (Eddie Marsan) that she is going to stay with her brother Todd (Billy Miller) because things are not good between them after she learned he slept with a prostitute the night before he proposed to her. He apologizes and begs for her not to go, but she leaves him and the necklace Ray gave her that was Abby’s (Paula Malcomson).

Ray is also patched up at the Animal hospital, pay the veterinarian leaves with Natalie’s husband. He tells Ray how he met Natalie and he was involved with Natalie’s mom, Sarah when Natalie was 16. Meanwhile, Teresa (Alyssa Diaz) says goodbye to Bunchy (Dash Mihok) and their daughter as she leaves on the wrestling tour. He is saying negative things as she tells the sleeping baby to take care of her daddy; before Bunchy can say he loves her, she is gone.

Natalie’s husband, Bob says Ray is going to jail but Ray says he beat his wife but he claims Natalie shot him. Ray asks him where is the gun and the bullet and if he calls the cops he has no evidence. Lena arrives carrying bags of garbage and Bob wants to know what the hell is happening. Ray warns him he has seen this a million times and someone always ends up dead, and it won’t be Natalie and tells him to stay away from her. Ray comes down and Lena reminds him about his anger management appointment.

Terry, alone, turns off the pacemaker and he begins to shake uncontrollably as he looks at the memorial photo of Abby. His phone rings and its Conor (Devon Bagby). He turns his pacemaker back on and talks to Conor about his first match, asking for advice and then Terry decides he is going out there after Conor said not to.

Ray comes home, finds his dad asleep, with Mickey having no idea who he is talking about. Ray goes upstairs and finds Natalie in the master bedroom sleeping in the bed on Abby’s side. He changes his mind and tells her to keep the shirt on and tells her Bob isn’t dead and will be fine but she will get everything she wants. She apologizes about the shirt saying she didn’t mean to overstep and he explains to her about Abby and her passing away a few months earlier. She tells him she has a place to go and he leaves.

At the bar, Mickey reads some of his stuff as Bunchy asks him to help him but Billy, Jeff’s assistant, arrives to see him. Mickey learns his writing isn’t good, and his script hasn’t received a recommend and the agency is passing on his script; Billy scurries out the door.

Terry calls Maury and asks her to call him as he walks to the Ventura Military Academy to see Conor wrestle. Terry seems very concerned when the fight becomes unsportsmanlike; both teams get involved in a massive physical fight and Terry takes Conor outside and says that is a sport not a fight, it has rules. Terry notices his attitude and asks him if he is okay, Conor reveals he is going to enlist in the Marines after graduation but Terry cannot tell his dad, Ray. He says college and making money makes you weak and you need to be tough in this world like his dad. Conor thinks he will be a great soldier.

Ray is late for his appointment, he is put in front of a computer to do a test and is told if he gets better than 70% he comes back next week but if he fails, he will report him. Meanwhile, Mickey is on the phone finding out who the person was who gave his script a bad review. Harriet (Jayne Taini) arrives at the bar and orders a drink as Mickey exits the bar Frank Barnes (Michael McGrady) orders him to take a walk with him explaining they have a problem. He wants Mickey to deal with it as Ray has too much on his plate and tells Mickey he will be in touch.

Ray knocks on Dr. Brogan’s (C. Thomas Howell) door, and got 73% on his test but before he goes he asks if the night he was arrested if his brother had said something insensitive; Ray says no and it was just a misunderstanding. He says Ray didn’t beat his brother repeatedly over the head over a misunderstanding and dismisses him. Natalie calls Ray, asking to meet him.

Mickey sits with his grandchild and talks about his script, dipping his soother in some whiskey and gives it to the baby. Harriet talks to Bunchy about purchasing some property, saying its a good deal and its the same deal she has with his brother. She says he will be his own boss and get a few guys to run the place and sit back and count his money. Bunch looks at his baby and back at the paperwork.

Terry comes to Todd’s place and wants to speak to Maury. He asks her to hear him out, explaining about how he grew up and that he needs her and if she leaves him then he is nothing and he cannot lose her. She says its not only what he did but that everyone knew and didn’t tell her, making her feel like an outsider. She closes the door in his face.

Ray arrives at the studio where Natalie is, as he watches her perform he reminisces about Abby and the kids, and how she looked after losing her hair from her illness and how weak she was. Abby sits and asks him if he wants to come play and forget about everything. He says he can’t and she begs for him not to run away from this. He grabs a bottle of booze and walks the dog while drinking it.

He runs into Natalie who is walking her dog and she says she knows him; from the car crash. She was the one on the top of the hill that he swerved to miss and almost killed him and Abby. Ray leaves the studio and recalls having a conversation with her saying he works for people like her, like when things go wrong he tries to make them right. She reveals she was running from her husband after they got into a fight. She tells him that some days are just tough days; he says he should go but she asks him to stay for one more drink saying they are only walking their dogs.

Natalie says Bob agreed to the divorce and leaving her alone. She apologizes about his wife and when he wonders why she called him; she asks him to return the dog to Bob and as he leaves she gives him back Abby’s shirt.

Ray arrives at the house, rings the bell and returns the dog. Bob admits to leaking the photos and says they were in a great space and he would cut out his heart just to be that happy again. Ray walks away without a word.

Mickey tells Bunchy to take whatever he is going to do and be great at it. Mickey says maybe some dreams are meant to come true. Bunchy calls Teresa who doesn’t answer, but he says he loves her; he asks Mickey to watch the bar, he takes the baby and says he has something to do but Mickey says he is in no shape to watch anything.

Bunch goes to the property Harriet told him about, he carries his little girl, lifts her above his head and says, “Its beautiful!”

Ray walks his dog past Natalie/Bob’s house and remembers having wild sex with her in their living room and continues to walk down the street.