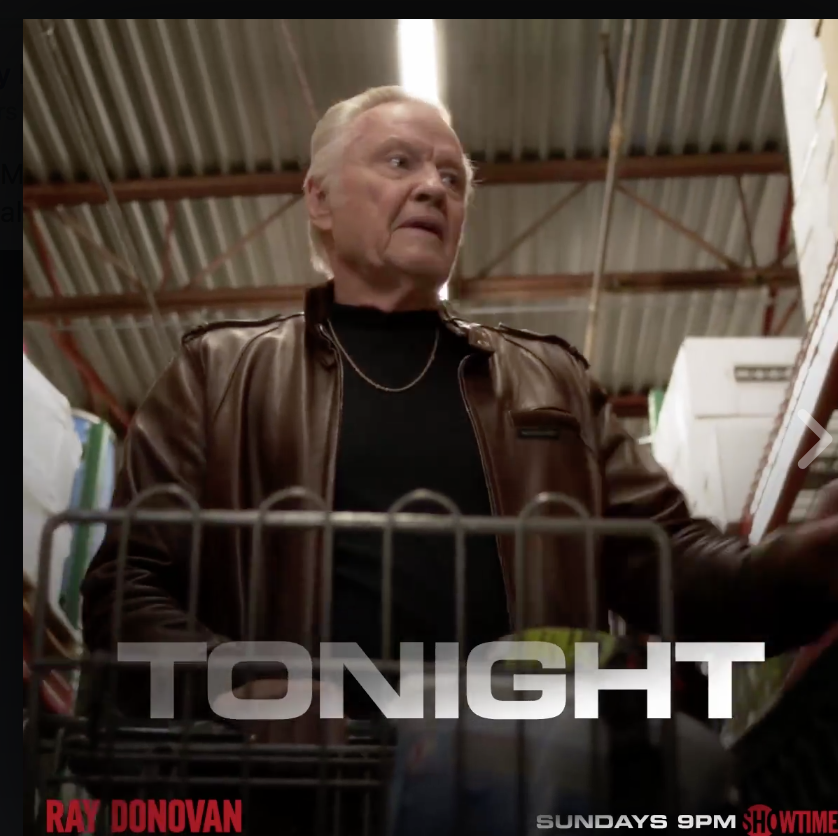 Tonight on Showtime Emmy Award-winning drama Ray Donovan airs with an all-new Sunday, September 10, 2017, episode and we have your Ray Donovan recap down below.  On tonight’s Ray Donovan season 5 episode 5 episode called, “Shabbos Goy,” as per the Showtime synopsis, “Ray’s therapy is at odds with Sam’s high-stakes power struggle.”

Tonight’s Ray Donovan season 5 episode 5 is going to be exciting.  So be sure to bookmark this spot and come back from 9 PM – 10 PM ET for our Ray Donovan recap.  While you wait for our recap make sure to head over and check out all our Ray Donovan news, recap, spoilers & more!

Ray is at the movies watching his recent client. Mickey arrives at the bar. He hears crying. It’s Bunchy. He tells him he is crying because he lost of all of his money. Bunchy rambles about wanting a sandwich, how they took it all. Bunchy calls himself a fucking idiot. Mickey consoles him.

Ray is in his mandatory therapy session. He shares that he sold his house. He has an apartment in West Hollywood. His therapist asks him why he circled no on his questionnaire. Maybe Ray doesn’t want any records. His therapist tells him he needs to ask him in purpose. Ray shares that reluctantly that he was touched inappropriately, but he already talked to someone about that. Ray answers yes to all the other questions about growing up in a dysfunctional home. The therapist tries to dig deep, but Ray doesn’t want to talk. He is given Zoloft for depression.

Mickey is at the local home improvement store. He buys a shovel, tape and odor remover.

Ray is at the pharmacy. He calls Tom, who won’t agree to a deal. Ray gets his medicine after being told it won’t kick in for 2-4 weeks. He goes back to the office. Terry shows up. He thinks Ray needs to tell the kids about selling the house. He is headed to New York for work. He might stay there and get a new start. Terry leaves. Ray looks at the bottle of medicine.

Bunchy is at daycare dropping off the baby. He gets in the car and cries. He hits the steering wheel.

Ray calls Bridget. He tells her he sold the house. She doesn’t say much. He talks about storage. She tells him to throw her shit away.

Ray meets Tom at the pier. Someone is watching them from a car. Tom gives Ray a note. He wants 2 million and her husband’s Oscar. Ray doesn’t think she will go for it.

Terry arrives at the cemetery. He touches what is believed to be Abby’s grave and cries. He tells her, carrying her coffin was the hardest thing. It broke his heart.

Ray meets with Sam. He tells her what Tom wants. She doesn’t want to budge on the Oscar. She has a counter deal, $3 million and no Oscar. Ray will talk to Tom to see what he can do. Sam’s coworker tells Ray on the side that Natalie has disappeared. He needs Ray to find her.

Mickey shows up at the Gentlemen Club. Avi is there very drunk. Mickey talks to him. Avi needs to go. Mickey follows him outside after he steals Avi’s keys. He hits him with his own gun and throws him in the trunk.

Bunchy goes back to the sub shop where he was robbed. He is told Ian is going to get money from the company because of the lack of security.

Mickey drives through a desolate location while Avi sings in the back.

Ray arrives at work to ask Lena for an update on Natalie. She is in his office. Ray comes in to see Natalie.

Natalie explains that she walked off the movie because the night she almost killed him and Abby she was running from Doug’s house. His wife came home and she had to run for it. She is pregnant. He told her to get an abortion. She is keeping it. Ray tells her to give him her phone, credit cards and photo id.

Mickey takes Avi out of the trunk. He tells him he has no choice.

Bunchy makes a phone call to see if his money can be covered by insurance.

Mickey walks Avi away from the car and tells him to get on his knees. Avi says wait, he wants one last smoke. Mickey tells him to go ahead but he doesn’t have all day. They talk about Frank. Avi tells him he didn’t steal the drugs, Frank did and then they partnered to sell. Avi warns him that he will be next. He will partner with Frank.

Smitty shows up at Bridget’s. He isn’t feeling well, but he is trying to wrap his head around why Ray made him sick.

Mickey goes back to the club. Avi was right. Mickey let’s Avi go. Before he leaves, he tells Avi they are going to get rich together.

He flashes back to him and Abby in bed, laughing and smoking. She gives a toast to them. Then she asks him how many women he has been with in this apartment. None, he tells her. She thanks him for lying to her. He takes 5 Zoloft all at once. He shuts the door to the bedroom, leaving Natalie to take a nap.

Bunchy shows up to pick up his daughter at daycare. He has been drinking. Carmen can tell. She asks him. He tells her he had 2 drinks. He needs to have someone else pick her up.

Ray talks to Lena. He tells her to make it look like Natalie left to Paris. She is going to stay awhile. She is tired. Lena isn’t happy. Ray visits Sam. She gives him the Oscar.

Mickey arrives to help Bunchy. He hands him $80k and tells him they will get the rest of his money back.

Mickey meets with Frank and tells him he couldn’t find Avi. Mickey tells him that he can’t kill Avi, he is part of the family. He doesn’t want to be in the middle of it. Frank gets mad and arrests Bunchy at gun point.

Ray shows up at the hotel. He has the bag from Sam. The woman that was watching him and Tom earlier is looking out from a window. He enters the room with Tom. They exchange money.

Bridget calls Ray and tells him that he knows what Ray did. How he poisoned him and now he is going to die. Ray opens his car door and throws up. The woman watching him shows up outside of his car door. She takes the box he received from Tom, hops in her car and takes off. She drives fast and right into traffic. Someone hits her car in the driver side. Ray gets in his car and drifts off to a memory of Abby dying while Bridget lay next to her.